Non-Invasive Methods: Investigation of Airways Diseases by MRI in Rats

To study specific aspects of human diseases, rodents are often used by inducing in them symptoms which resemble those seen in patients. Such animal models serve also for the identification of potential drugs against lung disease[*]. Drug candidates are selected after having shown beneficial effects in in vitro systems. With the present project Nr. 82-02, carried out by Nicolau Beckmann and his team, the 3R Foundation is supporting the MRI approach for measuring lung inflammation and function, and the effects of potential drug therapy. The method allows the health status of individual living animals to be monitored and to reduce the number of animals per experiment by up to 90%.

Based on the use of magnetic fields and radiofrequency, MRI basically maps the distribution of hydrogen nuclei (protons) from water and fat in a region of the body. MRI is primarily a clinical diagnostic tool, however, in the past ten years, significant developments have been achieved in imaging small animals as well.

Because of physical characteristics, the living lung is one of the most challenging organs to image by MRI. Using conventional acquisition techniques, the lung appears dark in the images (figure 1). In order to acquire signal from lung parenchyma, special techniques need to be used. A further challenge for lung MRI is that cardiac and respiratory movements may cause marked image artefacts. These problems are more evident in small rodents, because of the higher cardiac and respiratory rates.

For drug testing in vivo, it is important to keep the acquisition conditions as simple as possible so that repeated measurements interfering minimally with the physiology and the well-being of the animals can be carried out on a routine basis. Beckmann et al developed an approach based on a conventional MRI technique, which produces sharp images from the chest of a rat respiring spontaneously (1). The examination time is of approximately 25 min, and during this time the animal is kept anaesthetized by the same anesthetic gas used in the clinic. 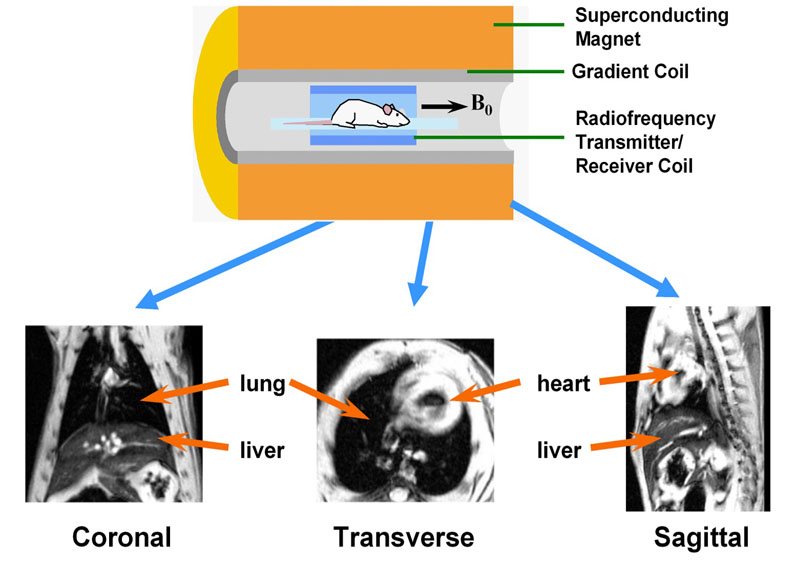 Fig. 1: MRI equipment for small rodent imaging
Essential elements are a magnet (usually superconducting operating at high B0 field, e.g. 4.7 T) generating a homogeneous constant magnetic field, a gradient system capable of producing a position-dependent magnetic field when data acquisition takes place, and a coil which transmits and receives radio-frequency waves. An image is reconstructed from such waves and represents a weighted distribution of water and fat protons in the body. Images with an arbitrary orientation can be obtained using MRI, for instance coronal, transverse, or sagittal sections, as illustrated. Animals are kept under anaesthesia (e.g. with an anaesthetic gas administered through a mask) during the imaging session.

Detection of structural and functional changes

With this approach, effects of inflammation (1), mucus secretion (2), airway and vascular remodeling (3), and parenchymal destruction (4) can be assessed in the rat lung serving as important readouts for models covering a variety of respiratory diseases*. The disease progression is followed in the same animal. The present example serves to illustrate the relevance of the information that can be obtained with MRI.

A characteristic feature of respiratory diseases such as asthma is edema in the airways due to an increased permeability of the lung microvasculature to plasma proteins. Assessment of the fluid leaking out from the microvascular circulation into the surrounding tissue is important for diagnostic purposes. In rats actively sensitized to ovalbumin (OVA) and challenged with the antigen (OVA, 0.3 mg/kg i.t.), an intense, even, fluid signal is detected in the lungs 24 h after challenge (figure 2). Despite the extensive presence of fluid in the lungs, no abnormal behavior by the rats is noticed. The MRI fluid signal that is observed for about 4-5 days, before it resolves spontaneously, significantly correlates with perivascular edema assessed by histology (5).

Fig. 2:
Axial images through the chest of an actively sensitized BN rat, acquired before (left) and 24 h after intra-tracheal (i.t.) OVA instillation (right). Note that the lung parenchyma appears dark; however, following allergen, a prominent MRI fluid signal is seen (arrow). This signal is due to edema. The acquisition time for one image is of 1 min.

This correlation provides the basis to address the effects of anti-inflammatory therapies in the allergen model. In one experimental paradigm the drugs are given in a therapeutic regimen 24 h after the challenge with OVA, a time point when an extensive MRI signal is present in the lungs. Treatment with budesonide, a corticosteroid approved for clinical use, accelerates the rate of resolution of the MRI signal (figure 3). The decline in the edematous signal correlates significantly with the reduction in perivascular edema quantified by histology of the lungs. By contrast, BAL fluid markers of inflammation are not affected by budesonide. It seems, accordingly, that the early resolution of MRI edematous signals by the anti-inflammatory drugs does not involve general suppression of the inflammatory response at least as monitored by BAL fluid analysis (5). 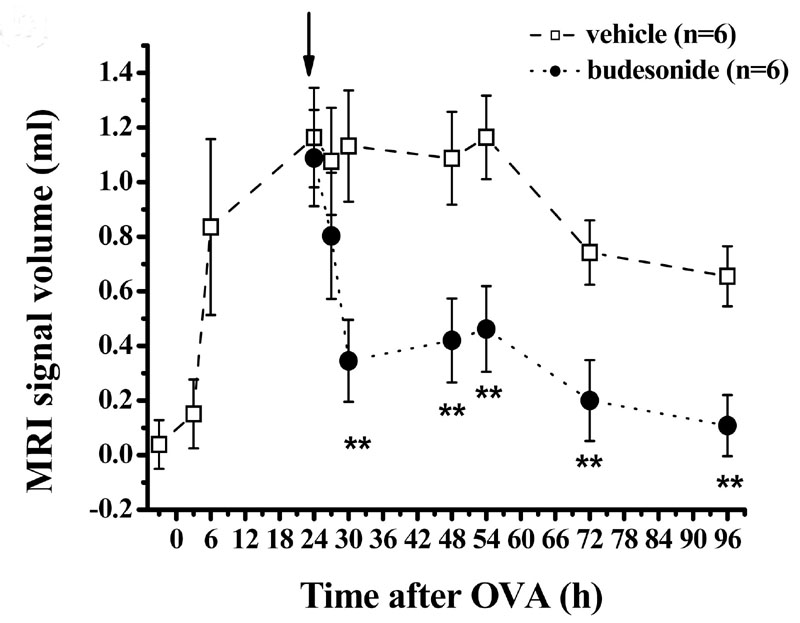 Fig. 3:
Volume of fluid signals detected by MRI in the lungs for an OVA dose of 3 mg/kg (i.t.). Administration of the corticosteroid budesonide (1 mg/kg i.t.) 24 h after OVA (arrow) leads to an acceleration of the resolution of the MRI signals, suggesting a rapid effect of the compound. This effect is not detectable by conventional BAL fluid analysis. Data are expressed as means ± SEM (n=6 rats per group).

With MRI one has the potential to shorten the overall experimental duration after injury onset since the technique is able to detect changes before these are reflected in parameters of inflammation present in BAL fluid. This results in less discomfort for the animals.

The non-invasive MRI approach results in a significant reduction in the number of animals used for experimentation. Depending on the application, a reduction between 80 to 90% is estimated. Since repeated measurements are feasible, each animal can serve as its own control, thereby reducing the variability of the data. As acquisitions are performed on spontaneously breathing rats, interferences with their well-being and physiological status are minimized. MRI is able to provide data on rapid effects of anti-inflammatory compounds on established inflammation, an information that is not accessible to conventional, post mortem BAL fluid analysis. Thus, data that are more relevant to address therapeutic effects can be obtained using MRI. Anesthesia is the primary limiting factor of the approach. However, following an examination, rats recover from anesthesia within 10-15 minutes.

Overall, MRI provides a global picture of the disease status in the animal model. As this imaging technique is largely available in hospitals, there is potential to address translational aspects from the models in rats to the human situation.