In the absence of valid serological and molecular markers to identify virulent strains of T. gondii[*], injection of the putatively contaminated clinical sample into mice and monitoring the survival of mice is still used as the biological test of virulence. In project No 107-07 an in-vitro cell culture method was developed to determine T. gondii virulence. Cell cultures of intestinal human epithelial cells were established to be appropriate hosts. The early activation pattern of host genes was seen to be predictive of T. gondii virulence.

Propagation of T. gondii isolates by inoculation into mice is a commonly used method. In order to reduce the use of mice, we evaluated the use of human foreskin fibroblast cells (HFF-1) for T. gondii propagation. Three strains with high (Type I), intermediate (Type II) and low virulence (Type III) were successfully grown in fibroblasts and did not alter their distinct virulence compared to that seen in mice. Propagation of T. gondii isolates (tachyzoites) in cell culture is therefore a suitable alternative to the in vivo approach with mice (Fig. 1). 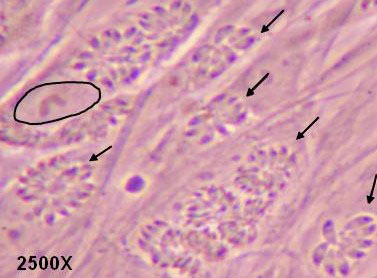 Fig 1
Tachyzoites (arrows) derived from Type I parasites replicating as rosettes in parasitophorous vacuoles in human fibroblasts (nucleus of one cell is encircled).

After ingestion of foods contaminated with T. gondii, the parasite (cyst or oocyst derived bradyzoites) usually infect the gut mucosa by invasion of small intestinal epithelial cells (IEC) and convert to the rapidly dividing tachyzoite form (1). Early local mucosal responses are initiated by IECs in response to T. gondii infection. In mice, within eight days of T. gondii invasion into IEC, a severe form of intestinal inflammation is observed characterized by recruitment of pro-inflammatory cytokine producing cells (2). Although the infection in the majority of healthy individuals remains asymptomatic, there are studies showing that T. gondii can induce severe intestinal inflammation in mice, rats, pigs and in certain species of nonhuman primates.

An immortalized small intestinal human epithelial cell line (HCT-8) was used as in-vitro target for comparative studies of the three T. gondii strains which differ in their virulence. Cells were cultured to a monolayer and infected with an inoculum of the parasites (tachyzoites). Replication within HCT-8 cells, even at a very low multiplicity of infection, was observed of both the highly virulent Type I parasites and the low virulent Type II and Type III parasites. Type I parasites had a significantly higher rate of replication than Type II and III, which correlated with a deleterious effect on host cells as indicated by the subsequent release of lactate dehydrogenase, a marker of host cell cytotoxicity (Figs. 2A, B). Further, the foci of cell destruction in the monolayer were rapidly formed and were more abundant after infection with Type I strains compared with Type II strains. These in-vitro findings correspond with the virulence of Type I strains observed in mice, and served as a basis to further explore the early molecular mechanisms that can be induced by T. gondii parasites in cultured cells. 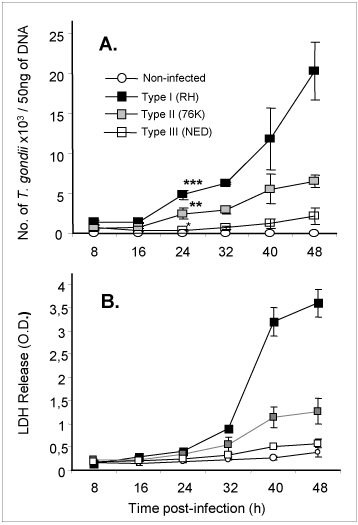 Fig 2
Replication (A) of high and low virulent T. gondii is highly correlated to cytotoxicity (B) of human intestinal epithelial cells (IEC).

We compared the activation of NF-κB (a key transcription factor required for the activation of host genes) in HCT-8 cells by the three different T. gondii genotype strains. Type II parasites that displayed intermediate replication induced higher NF-κB activity in HCT-8 cells than Type I and III parasites, confirming previous observations in human macrophages (3). We further examined whether the distinct levels of NF-κB activity could be correlated to downstream cytokine production. In accordance with the high NF-κB activity observed, Type II parasites induced host cells to secreted significantly higher levels of IL-8 and IL-6 than Type I and Type III strains from 8h until 48h post-infection.

Human b-defensins (HBD) are effector molecules that play an important role in early intestinal innate immune defense by their dual function, primarily as antimicrobial factors to defend against pathogens, and secondarily as chemotactic factors to recruit cells for adaptive immune responses (4). Thus, the differences observed in the replication capacity between the three T. gondii types could reflect differences to stimulate IEC for the secretion of antimicrobial immune effectors such as b-defensins. To investigate this possibility, we examined the early expression of antimicrobial peptide genes HBD1, 2 and 3 in IEC upon infection by the three T. gondii genotype strains. As depicted in Figure 3, a clear increase of HBD2 mRNA levels occurred after 3h of infection with Type II and Type III T. gondii strains but not with Type I strains. On the contrary, no significant induction of constitutively expressed HBD1 mRNA levels was observed following infection by each of the three T. gondii genotypes. HBD3 gene expression on the other hand was down-regulated by all the three T. gondii genotype strains. Our findings support the notion that virulent T. gondii parasites (Type I), unlike the less virulent strains (Types II and III), do not activate HBD2 early after infection and use this as one of the mechanisms to evade early host antimicrobial effects (5). 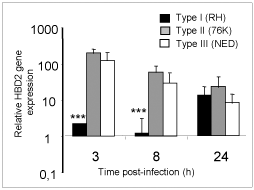 An in-vitro test based on human cell cultures to detect the presence of T. gondii in clinical samples and to inform on its virulence, would provide an alternative to current tests in mice and be more predictive of virulence in humans. Comparing the pattern of cellular response of human intestinal epithelial cells with the virulence known from mice studies, the high virulence of strain I can be distinguished from the ones with low virulence (Types II and III). The virulence is described by the combined analysis of T. gondii growth, cytotoxicity of target cells and the early differential response of gene expression within 3-4 hours, when there is no detectable replication of the parasite and therefore no cytopathic effect (Table 1). 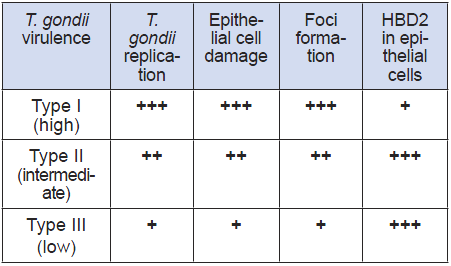 PDF version of this Bulletin No. 46