A novel in-vitro cell model of the human airway epithelium

The present project (No. 106-07) funded by the 3R Research Foundation, contributes to the development of a standard operating protocol (SOP) for toxicity tests using a novel in-vitro cell model of the human airway epithelium. This model, developed and produced by the company Epithelix, is commercially available under the brand MucilAir™. It represents a morphologically and functionally differentiated 3D epithelium which can be maintained at a homeostatic state for more than one year. MucilAir™ has been successfully introduced onto the market and contributes to the reduction of animal experiments[*].

In a number of in-vitro and ex-vivo models, the differentiated organ- or tissue-specific structures and functions can be maintained (2). This preferentially in freshly isolated primary cell cultures, precision lung or brain slices. However, in most of them the in-vivo like situations can be maintained only a few hours or days, which makes it difficult to use them for repeated, chronic or long-term toxicity tests. Requirements for an ideal cell culture model includes structures and functions typical for a defined target-organ or tissue affected after human exposure e.g. the human respiratory tracts to volatile chemical compounds.

The present novel in-vitro cell model of the human airway epithelium has been developed by the company Epithelix (3) and commercialized under the brand name MucilAir™. The 3D cultures are prepared from epithelial cells isolated and purified after enzymatic digestion of pieces of nasal/bronchial biopsies (collected in the hospitals, with the consent of the donors). The primary cells are cultured at an air-liquid interface under serum free conditions and in a homeostatic state for more than a year. Furthermore, the cultures are adapted to high throughput screens (HTS).

The epithelium (MucilAir™) expresses organ-specific structures (cilia) and functions, including defense mechanisms (mucus production and cilia beating) (4). Similar to the in-vivo airway epithelia, mucus is synthesized, which serves to trap the inhaled particles. With the help of cilia beating, harmful particles can often be removed. The loss or reduction of cilia beating can be used as an indicator of toxicity together with non-destructive endpoints allowing chronic and long-term toxicity testing. 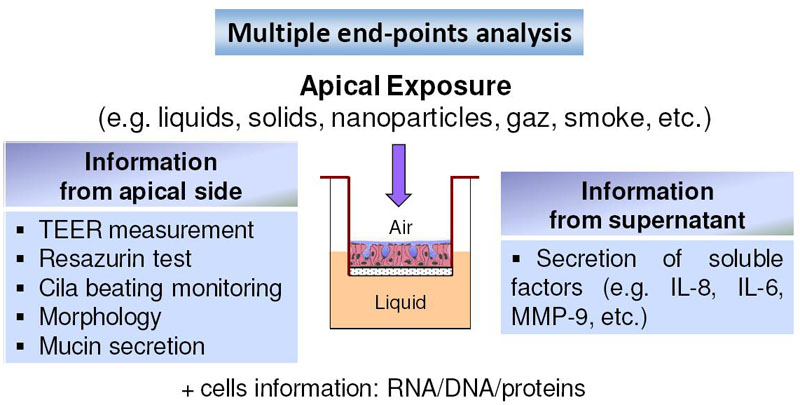 Fig. 1: Strategy of toxicity testing
The chemical products, in the form of liquid, solid or gas, are applied on the apical surface (exposed to the air). Following a standardized protocol, non-destructive endpoints are determined allowing chronic and long term toxicity testing.

Water can be toxic 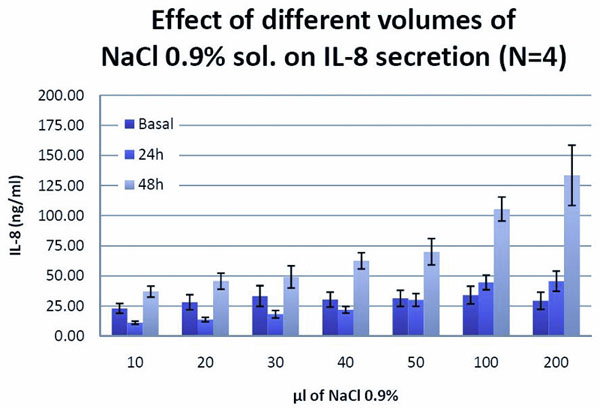 Beyond the in-vitro model

Toxicity tests in general are designed to minimize variance, bias, and the potential for false-positive and false-negative results. The same is true for in-vitro cell models. With the help of the 3R grant, the potential of MucilAir™ was evaluated as a tool for assessing the toxic effects of chemicals. A number of tasks have been resolved: a standard protocol for acute toxicity testing and several endpoints has been established with 9 chemicals (publication in preparation). The results demonstrated that the reproducibility is excellent; there was almost no batch-to-batch variation. In addition, partnerships have been established with industrial partners for validating MucilAir™.

The standardized protocol can be summarized as following: the chemical products, in the form of liquid, solid or gas, are applied on the apical surface (exposed to the air, Figure 1). We have chosen a one-hour incubation time in a volume of 200 μl in 24 well plates. 24 hours after the exposure, several non-destructive endpoints were evaluated, such as TEER measurement, cilia beating, cell viability test (Resazurin assay), measurement of released cell mediators (IL-6, IL-8, MMP-9). Representative EC50 viability for nicotine is given in Figure 3. The data obtained suggest that MucilAir™ is not only a reliable and reproducible in-vitro cell model for assessing the toxicity of the chemical in epithelial tissue but is also suitable for inhalation toxicity tests, such as in the area of occupational health problems.

A washing step (three times within one hour) is carried out before the test chemical is added to get rid of accumulated mucus which allows exposure levels at the cells to be defined more precisely. The selection of non-destructive endpoints, such as TEER, Resazurin assay, allows chronic and long term toxicity testing. Depending on the purpose of the test, additional (destructive) endpoints such as RNAs, DNAs and proteins extractions for genomics and proteomics analysis can be included.

Fig. 3a
Effect of Nicotine on Cell viability
Dose-response curve of cell viability (Resazurin Test) in MucilAirTM after exposure to Nicotine. The EC50 value is estimated to be 78 mM. 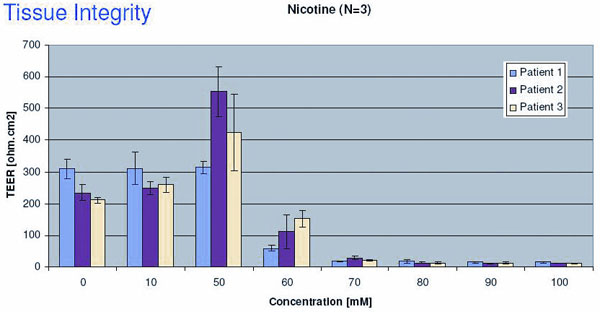 Fig. 3b
Nicotine induced changes in Tissue integrity
EC50 value of Nicotine determined by TEER measurements is about 55 mM. TEER is a very sensitive endpoint and it is also very easy to perform. The tests have been done on three different batches of MucilAir™, in triplicate. Judging by the standard derivation, the variation is small, and the reproducibility is good.

The expertise gained in this project allowed us to provide customers in the chemical as well as the pharmaceutical industry with testing services. Certainly these investigations replaced or prevented a number of investigations in laboratory animals. In the future, we believe that in the area of toxicity pathway related and targeted testing (1), such organ specific, human cells based system like MucilAir™ with intact structure and function will play a prominent role. Our final goal is to have MucilAir™ validated by competent authorities such as ECVAM, OECD or ICH in order to be used in regulatory toxicity testing.

PDF version of this Bulletin No. 41