Bone metabolism and bone-biomaterial interactions can be studied ex vivo

Presently a vast amount of research into biomaterials and implant materials, whether metal or polymer based, are conducted in animal models, often sheep. Cell culture and tissue culture techniques are inadequate for this type of study due to lack of 3D structure and milieu in cell culture, and lack of physiological loading in tissue culture. The aim of this successful 3R funded project (Nr 78-01 and 86-03) was to validate a bone culture and loading system (Zetos) with regards to cell and tissue viability in order to establish a basis for future biomaterial studies that would greatly reduce the amount of sample variants that would then go onto animal based studies and therefore reduce the number of animals required.

Bone cultures are not perfect

There are two in vitro techniques to culture animal bone cells; cell culture and organ culture. Cell culture requires the disassociation of cells from the bone tissue and their subsequent propagation and expansion in plastic culture vessels. Organ culture involves the maintenance of 3D bone explants, including the cells and extracellular matrix, in the laboratory. There are several disadvantages to each of these techniques. Culture of cells usually promotes the expansion of one cell type in a 2D environment that often causes the cells to lose their characteristic phenotype. The tissue maintained in organ culture usually suffers from necrosis due to extremes of too much oxygen at the surface and too little oxygen in the centre. Neither technique allows mechanical stimulation[*] to be applied to the cells, which is known to induce extracellular matrix production.

Most experiments evaluating biomaterial integration with bone and soft tissue are conducted within animals. Several novel biomaterials are created on a yearly basis, different kind of polymers, coatings, metals with different topographies and surface chemistry, bone cements etc. These must be evaluated firstly in vitro and then within animal models. One of the most common models for biomaterials for fracture repair is the sheep due to the similarity in size of the bone to human bones. Therefore implants for human use often are directly evaluated. Only the most successful biomaterial / implant would continue for human trials. Often the conventional in vitro tests using bone cell cultures lacking physiological loading can not differentiate between the variants and numerous variants are then used in the in vivo tests. The development of a realistic 3D loaded system whereby the candidates could be eliminated before in vivo studies would greatly reduce the amount of animals. 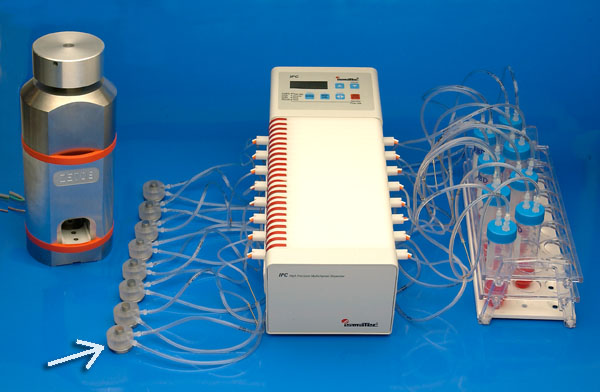 Fig. 1: The Zetos culture system: the loading device (left), a set of diffusion culture chambers (arrow), each with their own media supply from a reservoir (right) through Tygon tubing with the aid of a peristaltic pump (white box).

This novel system (Ref. 1) combines a set of housing chambers for the cancellous bone tissue, as well as a loading device to apply daily physiological mechanical stimulation (Figure 1). Cancellous bone tissue from ovine distal femora, bovine metacarpals or human femoral heads (Ethic Commission Graubünden (18/02) approval), were excised and cut into 9mm thick sections with the use of an Exakt 300 band saw. No animals were sacrificed specifically for this work, bovine material was collected from the local slaughterhouse and ovine material was used from animals after sacrifice for other experiments. Cores 10mm in diameter were bored out from the sections and cut parallel to 5mm with an annular saw. Bone cores were inserted inside the diffusion culture chambers and maintained in culture for 15 days. Bone cores were loaded daily (insertion of each chamber into the loading device) for 300 cycles at 1Hz with a complete jumping waveform, giving each core the equivalent of 4,000μstrain (maximum and minimum compression of 20μm and 5μm respectively). This system allows bone and marrow cells to constantly interact with each other and with migratory cells and the extracellular matrix. This type of niche has never been reproduced in vitro where online measurements can be made along with the application of strain induced in bone during loading. 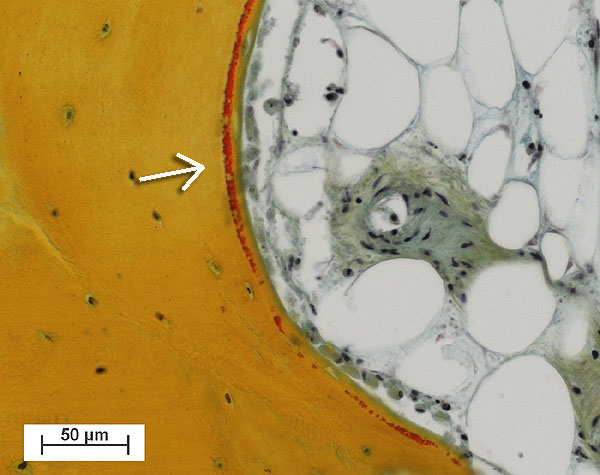 Bone cores were fixed in 70% ethanol after 15 days, before being dehydrated through an ethanol series. Samples were embedded in Technovit 9100 (Ref. 2), polymerised at –20°C for histological and immunohistochemical evaluation. Histological sections (6mm thick) showed osteoblasts had laid down collagen fibres to produce osteoid seams (Figure 2); osteoclasts in lacunae (Howship’s lacunae); and the osteocytes and bone marrow appeared well preserved. Very little necrotic tissue was observed apart from the periphery of the sample where the drill dust was compacted within the trabeculae. Fluorophore incorporation demonstrated bone growth and mineralization occurred during culture (Figure 3). 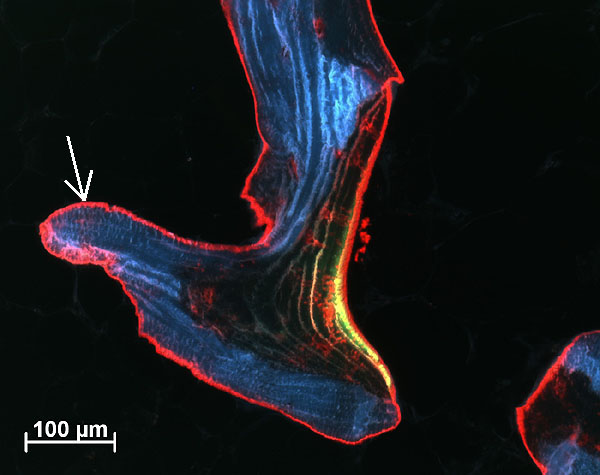 Protein synthesis was detected through SDS-page and Western blot analysis as well as autoradiography of embedded sections, demonstrating cell viability after 15 days in culture (Figure 4). Non-collagenous proteins such as osteopontin, osteonectin and osteocalcein, as well as procollagen Type I and RankL were localised through immunohistochemical labelling of sections. 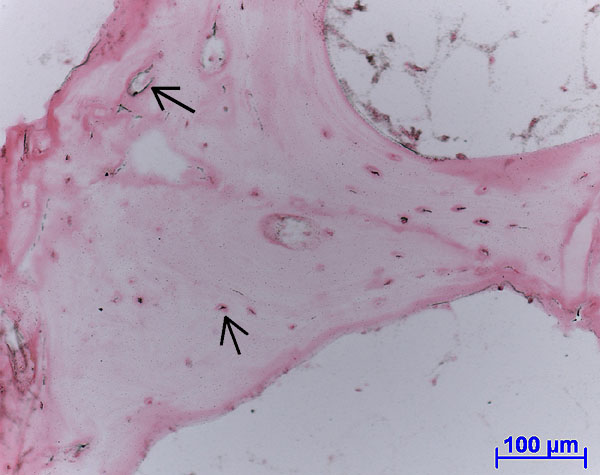 The ex vivo loading Zetos culture system was validated to culture cancellous bone with osteocytes, osteoblasts, osteoclasts and bone marrow cells in their natural 3D relationship to each other. Bone cells were observed to produce and secrete protein and mineralize tissue, suggesting cell viability (Ref. 3) up to 15 days of culture. This system also has the advantages in reducing the variability, cost and ethics behind in vivo studies. Bone cells constantly interact with each other, migratory cells, the surrounding extracellular matrix (ECM) and interstitial fluid to form a microenvironment which can respond to various endogenous and exogenous stimuli and control gene expression patterns that are crucial for tissue function and homeostasis. The ECM is a critical factor in regulating cell morphology, proliferation, and differentiation. By allowing the bone cells to be cultured in their near to natural microenvironment the Zetos system overcomes the limitations observed with cell and organ culture. The system has potential for studying bone-biomaterial interactions, as well as bone remodelling in normal and osteoporotic human or animal bone, bone biomechanics, and the effects of drugs, hormones or growth factors on cancellous tissue, making it an essential laboratory aid in the future.