Background and Aim
Investigations of the mutual cellular interactions between epithelial cells and intraepithelial lymphocytes (IEL) in the intestine are difficult to achieve due to the limited accessibility of this compartment to direct experimental interventions. Furthermore, relevant functional parameters, such as the influence of distinct T cell subsets on barrier function of the intestinal epithelium are difficult to determine in experimental animals. These aspects highlight the importance of establishing in vitro systems to obtain relevant information on the interplay of these cellular systems in maintaining local tissue homeostasis.
The establishment of suitable in vitro co-culture systems was so far hampered by the poor yield of IEL isolated from intestinal epithelium and particularly the short survival of some IEL subsets which may be < 12 hours in vitro under normal T cell culture conditions.
Hence, the specific aims of the present proposal are
1. to increase the yield of IEL isolated from the intestinal epithelium of mice and humans
2. to optimize culture systems for extended culture periods for all IEL subsets
3. to establish co-cultures of these IEL subsets with syngeneic intestinal epithelial cell lines and to determine whether and how antigen-specific activation of IEL affects the permeability of the intestinal epithelial cell layer and the pro- and anti-inflammatory properties of epithelial cells.

Method and Results
Protocols for the reproducible separation of intraepithelial lymphocytes (IEL) from contaminating epithelial cells by elutriation centrifugation will be established. With this technique we have already managed to substantially enhance the yield of IEL from human intestinal tissue samples (Table in Figure 1).
Currently, we are also optimising this method for the isolation of mouse IEL for subsequent co-culture with a syngeneic (H-2b) intestinal epithelial cell line (mICCl2, YAMC or MSIE). Culture conditions in vitro need to be established and optimised to allow for an extended co-culture of all IEL subsets with these epithelial cell lines. The mutual interactions and consequences of an IEL-epithelial cell culture will be monitored using transepithelial resistance measurements, gene expression profiles of all cell populations involved (e.g. using Realtime RT-PCR procedures), and ELISA- and Luminex® - based methods to determine secretion of cytokines.

Conclusions and Relevance for 3R
Reduction in animal experimentation:
The establishment of the envisaged syngeneic intestinal epithelial cell – intraepithelial lymphocyte co-culture system should allow to directly monitor time-dependent changes in these cell populations. Furthermore, it will allow direct experimental interventions such as antigen-specific activation of the IEL subsets (using MHC-restricted peptides), and mimicking an inflammatory situation by adding either recombinant pro-inflammatory cytokines or relevant inflammatory cells.

Refining experimental methods involving live animals:
The optimisation of the isolation protocols for intestinal IEL will not only lead to a more representative and thus more reproducible population of IEL, but may also substantially reduce the number of donor animals required for the isolation of IEL. Furthermore, the epithelial cell lines can be genetically modified (e.g. using siRNA) to experimentally assess the direct functions of candidate genes and their products relevant for the IEL-epithelial cell interactions. In the future, this may make the generation and the use of genetically modified mice often obsolete for studying intestinal IEL functions and lymphocyte - epithelial cell interactions. Last but not least, with these co-culture systems we expect to obtain relevant information regarding the biology of intestinal IEL that will allow more precise analysis and interpretation of the pathophysiological role of IEL in humans.

Figure 1: Representative example of a comparative isolation of human intraepithelial lymphocytes by Percoll density gradient: Equal numbers of cells released from the intestinal epithelium were subjected to either conventional Percoll gradient, or elutriation centrifugation, respectively.

Figure 2
Scatter blot of the IEL-enriched fraction following elutriation centrifugation. In this preparation 88% of the cells are intraepithelial lymphocytes. 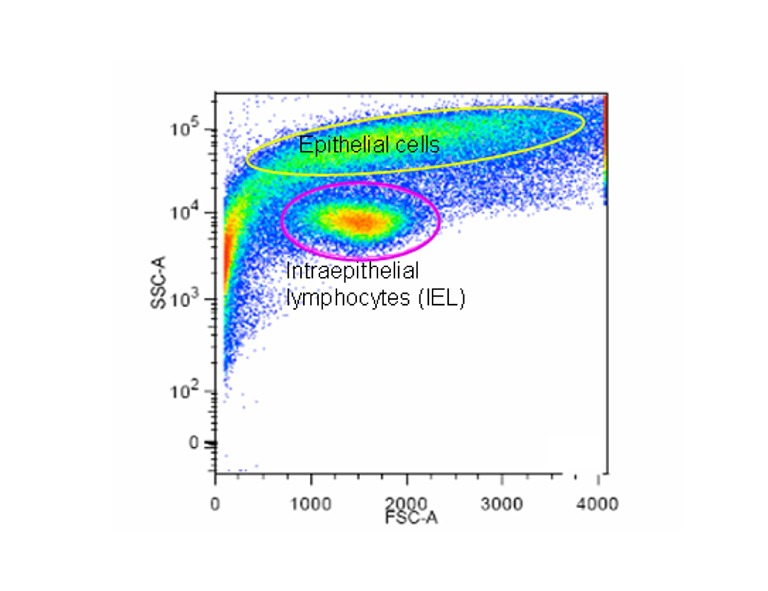