Development of a three-dimensional enteric cell culture model for in vitro studies of the intestinal eukaryotic parasites Cryptosporidium spp.

Background and Aim
Although in vitro cultivation, be it axenic or in the presence of host cells, is feasible with species from all major groups of parasites, there are species of medical and/or veterinary importance which are refractory to such attempts. An example is Cryptosporidium spp. which are intracellular, intestinal parasites with a broad host range. Their transmission stages (oocysts) have to be produced in very young animals (neonatal mice, calves, lambs, piglets) in which such infections are difficult to control clinically, and death due to dehydration is observed regularly.
Continuous cultivation of the asexual stage of Cryptosporidium spp. in conventional 2-D in vitro systems is not possible due to the rapid death of the monolayer cells infected with Cryptosporidium. A novel option to overcome the limitations of 2-D cultures is to cultivate such parasites in three-dimensional (3-D) aggregates of intestinal epithelial cells mimicking their natural environment. Such 3-D cell aggregates can be produced under low-shearing conditions in the Rotary Cell Culture System (RCCS, Synthecon, Texas, USA), a technique which was developed by the National Aeronautics and Space Administration (NASA) in order to provide ground-based control experiments mimicking low gravity. The basis for this technique was the observation that cells in suspension tend to aggregate when exposed to microgravity in space. RCCS is an optimized form of suspension culture that - due to its low-shear and low-turbulence operation - minimizes mechanical cell damage and allows cells to aggregate, grow three-dimensionally and to differentiate. In a pioneering study, paper (Nickerson et al., Infect. Immun. 2001, 69, 7106), 3-D cell aggregates of an intestinal cell line (CCL-6) have been shown to display minimal loss of structural integrity and more rapid recovery of cell structure compared to 2-D cultures when infected with Salmonella in short time studies. We hypothesized that these particular features of 3-D aggregates should allow to sustain cryptosporidial infections and to support long-term growth of the parasites suitable for parasite propagation and studies on parasite-host cell interactions.

Method and Results
A number of intestinal epithelial cell lines, of human (CCL-6, CCL-241, CCL-244 [HCT-8], HTB-37 [Caco2], HTB-38, CRL-2102 [clone of Caco-2]) or bovine CCL-22 [MDBK] origin, were seeded, either singly of in mixtures, into Rotary Cell Culture System (RCCS-4) vessels containing carriers (Cytodex 3 microcarriers; Soft PGA Felt TE pieces). The cells were incubated in general for four but occasionally up to eight weeks. In order to promote cell differentiation, glucose concentration in the medium was gradually reduced and/or forskolin was added. Hence, multilayer cell aggregates were obtained with both carrier materials (Fig. 1) and, most interestingly in the case of the cell line HTB-38, also without attachment to a carrier surface (Fig 2). Microvilli were present at the surface but also in the intercellular space (Fig. 3), and tight junctions and desmosomes were prominent. Further, goblet cells were present, and the production of mucus could be demonstrated (Fig. 4).
Cell aggregates were exposed to varying inocula (between 10 to 107) of sporozoites obtained from oocysts of C. parvum (mainly from naturally infected calves but also from experimental animal infection), but also C. hominis and C. serpentis (isolated from specimens submitted to the diagnostic unit of our Institute) either directly in the RCCS-4 vessels or after transfer of the aggregates to 24-well tissue culture plates. Confocal microscopy revealed a successful infection process (Fig. 5). Characterization of parasite development and growth was done by reverse-transcription real-time PCRs of stage-specific genes, adopted from Jakobi and Petry (2006). None of the experiments revealed a propagation of the parasites beyond 72 h after incolulaton, which corresponds to the well-known situation with inoculations of two dimensional in vitro cell cultures. A recent publication confirmed our findings: Alcantara and colleagues (2008) using the very same cultivation system (RCCS-4) with CCL-244 (HCT-8) cells, the most suitable cell line for 2D experiments with Cryptosporidium, grown on intestinal submucosa grafts as carriers, observed an increase of parasite growth until 48 h post inoculation (p.i.) by qPCR, a signal equal to the inoculum 72 h p.i.. and no signal at 96 h p.i.

Conclusions and Relevance for 3R
This start-up project revealed that a number of intestinal epithelial cell lines can be grown in the Rotary Cell Culture System over a long period of time to form 3-D cell aggregates, to provide an environment similar to that between brush border microvilli of epithelial cells in vivo but this condition did not suffice to propagate Cryptosporidium as hypothesized, presumably for reasons that might be associated with the very peculiar intracellular but extra-cytoplasmic localization of this parasite.
However, we reckon that this cultivation system might be of value to cultivate small pieces of calf intestine allowing for standardized and reproducible inoculation of parasites to analyze the transcriptomes of different developmental stages. Further, the 3-D cell aggregates produced in the RCCS-4 might comply with the requirements of a variety of other pathogens (virus, bacteria, protozoal and multicellular parasites) of medical and veterinary importance which infect epithelia of the gastrointestinal, but also the respiratory or urogenital tract, and such cell aggregates might serve as a relevant model to investigate a number of aspects.
Therefore, our work might contribute to bridge the gap between experiments done with 2-D conventional cell cultures with their inherent limitations and those performed in live animals. By providing a better model for what happens in vivo, these 3-D cultures will allow researchers to considerably reduce their use of experimental animals in their investigations on a variety of infectious agents. 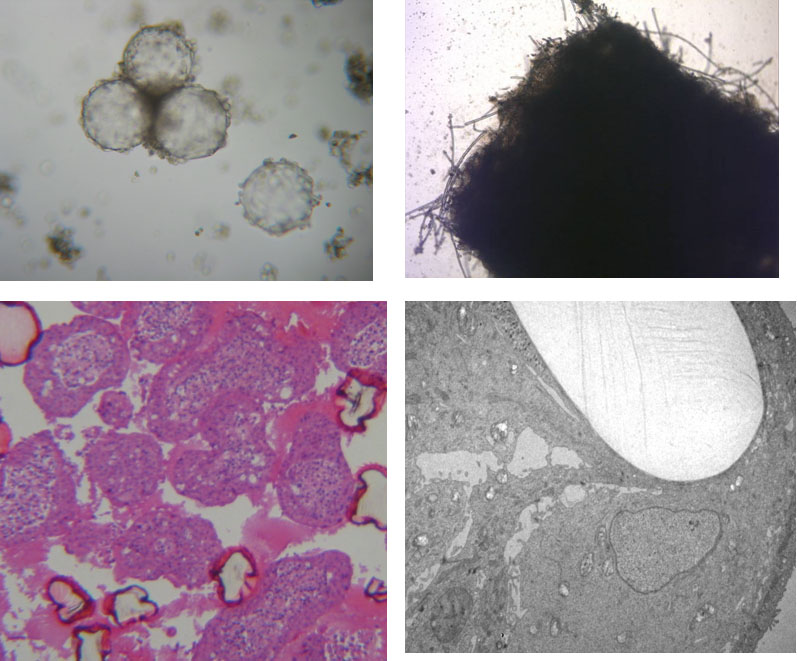 Figure 3
Formation of microvilli , tight junctions und desmosomes in cell aggregates from 3D-cultures (TEM by A. Hemphill, Institute of Parasitology, University of Berne). 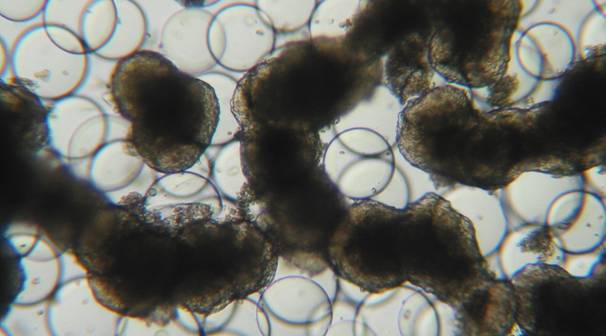 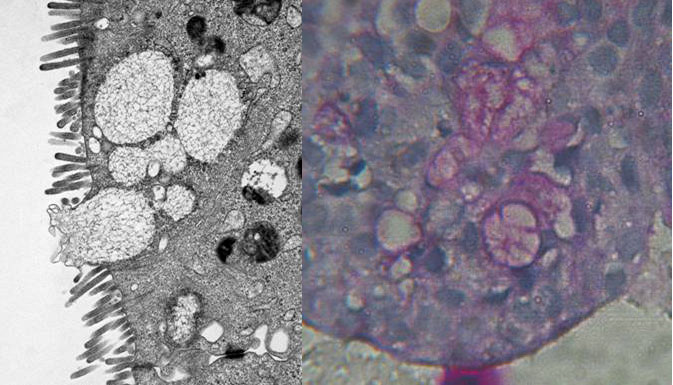 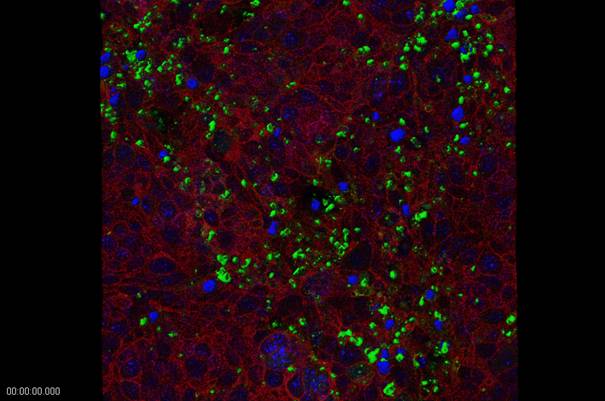