Adjuvanticity of microbial-derived particles and synthetic analogs in vitro.

Background and Aim
Methods currently used in toxicology for mandatory safety tests rely heavily on the dosing of animals, followed by the detection and pathological evaluation of manifested toxic effects. In the context of vaccinology, compounds of unknown functions are tested in vivo to demonstrate their immune enhancing properties without any clue of their toxicity. These procedures often cause animal pain, distress and even death before obtaining an indication of immune protection.
As new compounds become available, there is ethical, political and commercial pressure to reduce animal tests and ensures that tested animals undergo minimum pain and distress. In this context in vitro tests can represent a very valuable tool. New tests based on human lymphocyte cultures in vitro are particularly needed due to important differences between human and animals that render animal models poorly suited for identifying new safe immune enhancers for human vaccines.
The aim of this project was to develop an applicable system to identify human-compatible adjuvants in vitro.

Method and Results
Based on molecular profiles of human lymphocyte cultures and functional assays of T cell activation in the presence or absence of putative standard adjuvants, we have defined TNF/CXCL10 and IL-1 beta molecular signatures of adjuvanticity and pyrogenicity, respectively. We propose a new method of adjuvant screening. Proof-of-concept for this method was obtained by screening a small library of natural microbial compounds and synthetic analogues thereof, already tested in animal models.
Collectively, we propose a three-steps method of adjuvants screening (Fig.1), whereby potentially safe adjuvants are first identified in vitro for the capacity of inducing TNF and/or CXCL10 release by DC, and absence of IL-1 beta release by monocytes (Fig. 1, step 1). Selected compounds are then assessed for the capacity to enhance antigen-specific T cell activation in bulk cultures (Fig. 1, step 2) and limiting dilution assays (Fig. 1, step 3). Only compounds with high immune enhancer activity in vitro will be finally assessed in animal models before admission to clinical application.

Conclusions and Relevance for 3R
In the course of our investigation we have set the rational for the development of new applicable screening methods based on compounds pre-selection in vitro. The method we described models only few parameters of an immune response and presents a number of positive features. These include the simplicity and sensitivity of the biological responses assessed and the broad applicability of the assay to various compounds. Based on our experimental results we therefore propose to refine current methods of adjuvant screening by selecting candidate adjuvants prior to in vivo testing. This procedure will reduce the need of costly, demanding and potentially irrelevant animal studies.

Figures
Screening of ajuvants for human vaccines.
Step 1: Pre-screening. Safe potential adjuvants are identified in vitro for the capacity of inducing TNF and/or CXCL10 release by human monocyte-derived dendritic cells (DC), and absence of IL-1 beta release by monocytes.
Step 2: Adjuvanticity Test I. Human monocyte-derived DC are labeled with the red fluorescent dye CM-TMR. Cells are co-cultured with autologous purified CD4+ T lymphocytes, labeled with the green fluorescent dye CFSE, in the presence or absence of antigen (Ag) and adjuvant (Adj). Ag-specific T cell proliferation after 5 days of culture is measured by the loss of green fluorescence in live CD4+ T lymphocytes (detected in R7 and R8, respectively) excluding red-labeled DC from the analysis (R9). In the CFSE staining histogram plot red arrow specifies the non-dividing parent generation. The assay can also be run in allogeneic settings, without antigen or in the presence of bacterial enterotoxins that expand specific T cell subsets.
Step 3: Adjuvanticity Test II. Human Peripheral Blood Mononuclear Cells (PBMC) are primed in vitro with Ag in the presence or absence of Adj, without exogenous cytokines. After 5 days, cells are seeded at limiting dilutions in a microtiter plate and re-stimulated with autologous Ag-pulsed PBMC. Two days later, T cell proliferation is measured by 3Hthymidine incorporation. The frequency of Ag-specific T cells is finally determined according to the Poisson’ s distribution (LDA analysis). 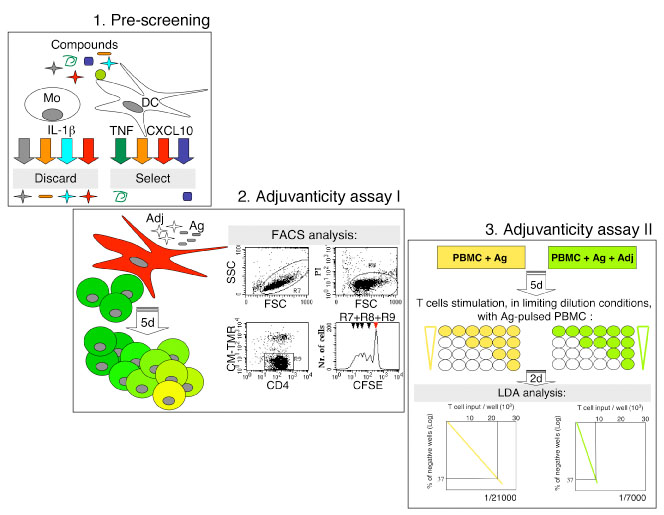