Stem cells play a key role in clinical as well as in experimental research. Pluripotent stem cells possess the capacity to elaborate each of the three germ layers (endoderm, mesoderm and ectoderm). However in contrast to totipotent cells, they are unable to “build” an entire organism. Induced pluripotent stem cells (IPS) have been generated by a reprogramming of somatic cells. Before these can be used experimentally, their stem-cell properties (“stemness”) must be validated by confirming their capacity to differentiate into cells of the three germ layers. To date, the gold standard for so doing has been an in-vivo assay, in which stem cells are engrafted into immunodeficient mice for the development of teratomas containing components of all three germ layers. The teratomas thus formed are routinely analyzed immunohistochemically for the various derivatives of the three germ layers. The site of implantation, the strain of mouse, and the post-grafting growth period, are amongst the variables that influence the formation of teratomas. To avoid the use of living mice, we wish to establish an in-vitro system to mimic the in-vivo formation of teratomas. With this end in view, we are using a commercially-available bioreactor (Fig. 1) for the three-dimensional culturing of collagen-embedded human embryoid bodies (EBs). 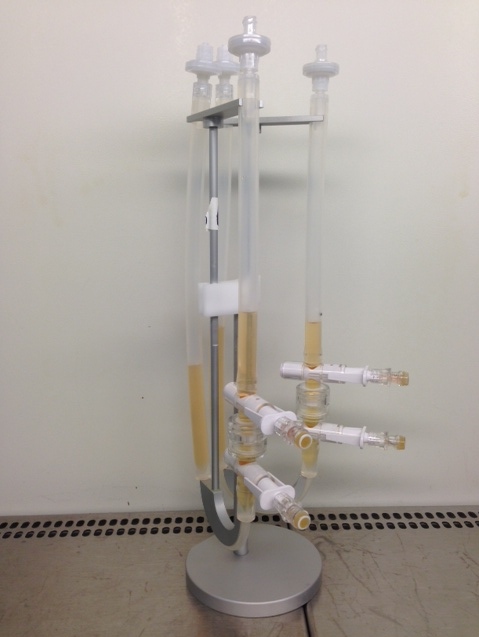 EBs that are derived from two different human embryonic stem-cell lines and one IPS-line are embedded within a collagenous scaffold (Ultrafoam®). These constructs are then cultured for up to five weeks in either a commercially-available bioreactor (Cellec Biotek AG, Basel), in which the culture medium circulates, or statically in multiwell plates. As a positive control, EBs are implanted subcutaneously in immunodeficient mice for 8 weeks. The tissues from each of the experimental groups are harvested and the vitality of the cells is assessed. The capacity of the cells to differentiate into the three germ layers is evaluated immunohistochemically and by the polymerase-chain reaction, using selected markers for each tissue type. In addition, the supernatants of the cultures are collected upon each change of medium for an analysis of metabolic activity.

To date, we have already established that, after a three-week period of culturing in the bioreactor, each of the two stem-cell lines developed into teratoma-like tissue-masses, as evidenced immunohistochemically by the expression of selected markers for the three germ layers. The collagen-embedded EBs hat were cultured statically in multiwell plates did not develop into teratoma-like structures, and immunohistochemistry for markers of the three germ layers revealed no evidence of their expression. We have also established the growth time for the differentiation of EBs into teratomas to be more rapid in the bioreactor-based culturing system than in living mice (three to five weeks instead of eight weeks).

For the bioreactor-based culturing system to serve as a viable alternative to the murine model, two additional factors must be investigated and satisfied:

1.    An estimation of the cost-benefit ratio between the bioreactor-based in-vitro- and the murine-model-based in-vivo systems.
2.    Comparison of gene expression characteristics of the teratoma formed in the bioreactor with those of teratoma grown conventionally in immunodeficient mice.

The use of stem cells in experimental and clinical research is increasing explosively, and for this reason, a proof of their pluripotency is essential. To date, experiments with living mice are indispensable for this purpose. We wish to replace the conventional in-vivo approach with a bioreactor-based culturing system, which is easier to handle and more controllable. The in-vitro approach will be further refined and validated with a view to establishing a surrogate for the in-vivo teratoma-formation test that is currently implemented to evaluate the pluripotency of novel stem-cell lines.