Hydrocephalus is a pathological condition that is characterized by an active distension of the ventricular system, which is caused by an impaired flow through the cerebrospinal fluid (CSF)-pathways [1]. Since CSF consists mainly of almost incompressible water, its accumulation causes an enlargement of the ventricles and, more importantly, can lead in the absence of invasive therapy to a degeneration of the brain parenchyma. Hydrocephalus is typically treated by diverting the excessive CSF from one of the two lateral ventricles via a shunt to other bodily compartments, such as the peritoneum (Figure 1). Although shunts are not a novel development, the typical outcome of this treatment is far from satisfactory. The deficiency is being addressed by the development of new, sophisticated active shunting systems in which the draining range can be adjusted to the actual need of the patient [2]. However, before these devices can be implanted in patients, extensive testing and validation are required.

Current shunt-testing platforms are too simplistic to assess these new devices, in so far as they are incapable of replicating the interdependence between the shunt, the CSF-system and the intra-peritoneal dynamics [3]. The deficiency will render necessary the undertaking of animal trials at all stages of the development process. With this project, we aim to provide a testing platform that can replace the preliminary animal studies. It reveals the fluidic dynamic functionality of a shunt in a realistic and accurate environment and reproducibly simulates the patient’s response to the device. 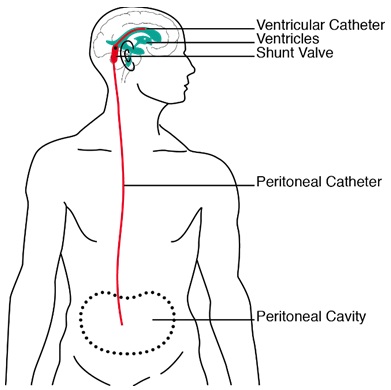 Figure 1: Sketch of a ventriculoperitoneal shunt as it is positioned in a patient. Cerebrospinal fluid is drained from one of the lateral ventricles into the peritoneum. Source: Schmid Daners, 2012 [4]

The simulator is based on the hardware-in-the-loop principle: the component to be tested is integrated into an artificial setup, with the usual environment being simulated in parallel. This was implemented by:

- using a posture mechanism to modify the location and orientation of the tested shunts according to a predefined test scenario;
- applying simulated intracranial pressure (ICP) and intraperitoneal pressure (IPP) to the proximal and the distal catheter ends using two highly dynamic pressure interfaces;
- measuring the resulting drainage rate through the tested shunt; and
- calculating ICP and IPP by simulating the patient’s relevant pathophysiology as a function of posture and measured drainage in real-time.

A realistic testing environment is ensured by placing the shunt in a water bath and heating shunt and test medium to 37 ± 1 °C using a surrounding incubator. A lumped parameter model is used to simulate the patient’s relevant pathophysiology. This mathematical model includes the influences of the measured drainage rate, posture, cardiac-induced pulsations, and viscoelastic effects. 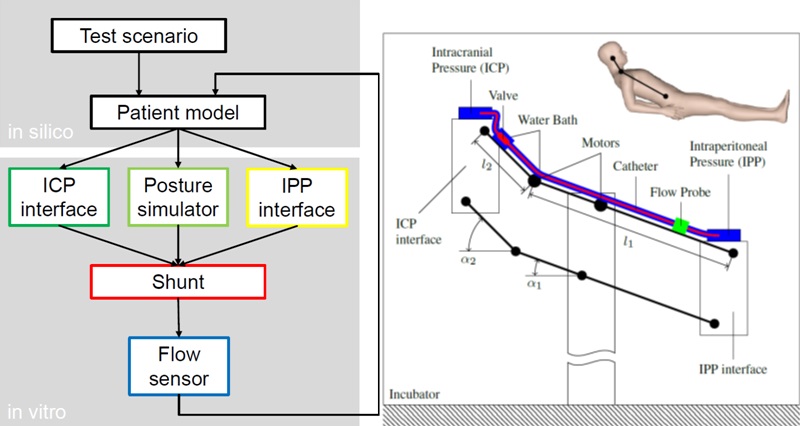 Figure 2: Left panel: Flow-diagram of the proposed shunt-testing platform, depicting the signal flow-paths between the in-silico patient simulator and the in-vitro shunt-testing hardware.
Right panel: Schematic drawing showing the posture mechanism of the hardware-in-the-loop (HIL) testing platform in semirecumbent position. Different postures are simulated by adapting the angles α1 and α2 using two electric motors. ICP and IPP are dynamically applied to the catheter ends by the ICP interface and the IPP interface, respectively. The resulting drainage rate is measured with the flow probe.

In two studies [5, 6], we have shown that the HIL testing platform can be used: to accurately analyze and quantify the dynamic interaction between shunt and patient; to test and evaluate anti-siphon devices in a reproducible yet realistic environment; and as a development platform for actively controlled valves.

The developed in-vitro shunt-testing platform will render obsolete most animal trials during the first stages of the development process of future active CSF shunts. Its accessibility to the taking of measurements, as well as the repeatability and the reproducibility of the in-vitro tests, helps to define the questions that still need to be answered more precisely in animal models. But these experiments with animal models will be undertaken only when satisfactory results appertaining to the various functionalities have been achieved in the in-vitro simulations. Using this approach, the otherwise inevitable animal trials can be markedly reduced in number.