The Clostridium-botulinum neurotoxins (BoNTs) are the most poisonous naturally-occurring protein toxins known to mankind, the toxicity range in humans being as low as 0.3 – 2 ng/kg when administered intravenously [1, 2]. The neurotoxins are mainly produced by the anaerobic, spore-forming, Gram-positive bacteria Clostridium botulinum, which is ubiquitously in earthy and aquatic environments [3]. Botulism is defined as a gradually escalating paralysis of the skeletal muscles, which ultimately leads to respiratory failure [4]. All BoNTs consist of two individual subunits, an ≈ 100-kDa heavy chain (HC) and an ≈ 50-kDa light chain (LC), which are linked by a disulphide bond (Figure 1). The HC is responsible for recognition – binding to specific receptors on the neurolemma of motor neurons – internalization by these nerve cells via receptor-mediated endocytosis, and translocation of the LC across the endosomal membrane through the HC-channel [5-8]. The LC, which is a zinc-endoprotease, specifically cleaves the soluble N-ethylmaleimide-sensitive-factor-activating protein receptor (SNARE), thereby resulting in an inhibition of neurotransmitter release and a consequent paralysis of the affected muscle [9]. If applied in small quantities, the toxin causes a locally-confined paralysis, which is beneficial in the treatment of various diseases and affections such as different forms of dystonia, hyperhidrosis, strabismus, chronic pain and headaches. Currently, however, it is most widely used in aesthetic surgery for the smoothing of wrinkles and frown lines [10]. Since these toxins are approved by the Food and Drug Administration (FDA), the safety of the patients has to be guaranteed. Consequently, it is crucial that the toxic activity of all batches of pharmaceutical BoNT-preparations is consistent. Currently, the potency of biologically-active BoNT in different batches is monitored using the murine LD50-assay. In this assay, different dilutions of preparations containing BoNT are injected intraperitoneally into mice and symptoms are observed for several hours up to 4 days. The mice manifest a characteristic wasp-like abdomen with narrowed waist, which is the result of the increased respiratory effort that is necessitated by the paralysis of the diaphragm; respiratory failure and death follow [11]. Due to the enormous demand for pharmaceutical products containing BoNT, it is estimated that in the USA and Europe, more than 600`000 mice are annually sacrificed for these batch tests [12, 13].

Over the years, different functional, immunological and spectrometric assays or combinations thereof have been developed for the detection of BoNTs [14]. To replace the current murine LD50-assay, a new test would have to assess all three essential functions of BoNTs, namely the binding of the toxin to specific receptors, the translocation of the LC, and the LC-mediated cleavage of distinct SNARE-proteins. However, most in-vitro assays are capable of detecting only one of these key biological activities [14-16]. Only cell-based assays, using, for example, rat spinal-cord cells or embryonic stem-cell-derived neurons, or ex-vivo ones, such as the hemidiaphragm assay, would be suitable as potential alternatives [14].

We have developed a new concept using nerve-cell-mimicking liposomes (Figure 2, A & B) [17]. Functionalized liposomes with integrated receptor – which permit the HC-binding of BoNTs – and an encapsulated substrate – bearing the specific cleavage site for the LC – are used (WIPO Patent Application WO/2013/011055).

Initially, BoNT of the serotype A (BoNT/A) binds via its HCC to the presented receptors on the liposome surface (Figure 2B, left). When the pH of the surrounding medium is lowered, the HCN translocates the LC into the liposomal lumen, wherein it exerts its endoproteinase activity by cleaving the encapsulated peptide substrate with specific cleavage sites and a quenched fluorophore pair (Figure 2B, middle). Upon cleavage, the fluorophore pair is unquenched (Figure 2B, right) and its fluorescent signal can be detected, thus permitting a quantification of the actual biological activity of BoNT/A in the system. With the use of well-defined components, the liposomes may be produced under reproducible conditions.

Against this background, we now wish to further test the concept of nerve-cell-mimicking liposomes. The main goal is to increase the sensitivity and the robustness of the assay for BoNT A. Subsequently, we would like to optimize the assay for a broader application to other serotypes and more complex sample materials.

During the past decade, new sensitive methods for the detection of BoNT-activity have been developed. However many of these methodologies suffer from the drawback of being incapable of systematically monitoring each of the three sequential activities that are requisite for the toxin`s functional competence. Consequently, the murine LD50-assay is still considered to be the gold standard for the detection of BoNTs in complex sample materials. Our liposome assay holds the potential to replace the murine bioassay. It can detect all three of the essential toxin activities of BoNTs (binding, translocation, cleavage) and can be conducted within 2 to 4 hours. Once the liposome assay has been shown to be of sufficient robustness and sensitivity to detect BoNT A, it could be used to replace the murine LD50-assay in the batch control of pharmaceutical products containing this serotype, thereby resulting in the sparing of up to 600`000 mice per year. Furthermore, if the assay proves to be sufficiently robust when applied to complex sample materials (e.g., food products, blood, faeces), it could be employed to detect BoNTs in a clinical environment. 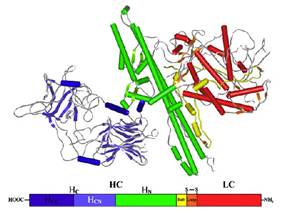 Figure 1: Schematic representation of the four-domain structure of the single-chain 150-kDa clostridial neurotoxins (bottom) and the corresponding crystal structure of BoNT/B [5]. 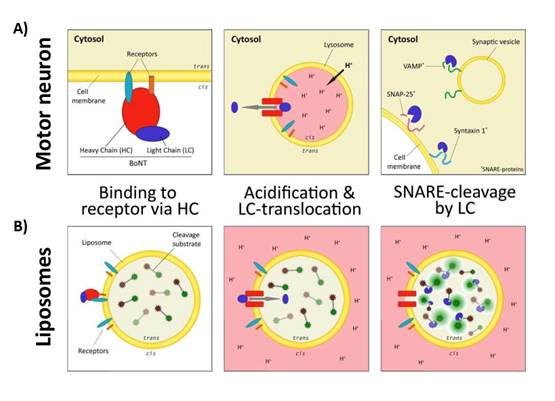 Figure 2: Schematic representation of the three steps of BoNT toxic activity in motor neurons (A) and functionalized liposomes (B) [17]