Validation of a new human in-vitro model of microglia

Brain diseases are a burdensome problem for modern societies. Not surprisingly, therefore, substantial resources are invested in neuroscience research, which depends heavily on animal models. In this respect, microglia have assumed an important role. Animals are sacrificed for brain excision and the collection of cells of in-vitro studies. Animals are also used for in-vivo experiments. Depending on the aim of the study and on the nature of the procedure adopted, the in-vivo animal experiments involve different levels of invasiveness and suffering, which may include injuries to the brain and the spinal cord, if microglial response to trauma is being investigated, as well as exposure to toxic and infectious agents. Most of these experiments are conducted with human diseases in mind, even though animal microglia behave in many respects differently to human ones. The need to improve human in-vitro models of microglia is thus pressing.

Microglia are the unique resident immune cells of the brain. They play a crucial role in most brain diseases, being implicated in repair responses to injury, degeneration and infection-induced inflammatory reactivity. Being resident cells of the brain, they have to be isolated from fresh cerebral tissue for research purposes; only a few human microglial lines are available and for restricted applications only. We have developed a new human in-vitro model of microglia, which are derived from monocytes circulating in peripheral blood (Etemad et al. 2012). However, we now need to ascertain whether the properties of the human monocyte-derived microglia correspond to those of the brain-derived ones, which is a precondition for the validity of the in-vitro model.

It is expected that by validating our new in-vitro human model of monocyte-derived microglia, and by applying it to two important areas of brain research, namely Alzheimer’s disease and viral infection, the prototype will gain wide acceptance in the implicated research community and will be used to replace animal experiments. In consequence, we anticipate a dramatic reduction in the consumption of animals for research in the field of neuroscience. 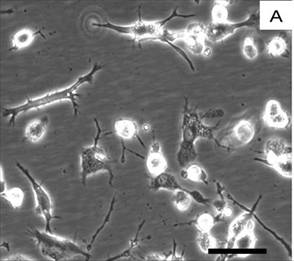 Figure 2: Expression of Iba1, a marker specific for microglia, by human monocyte-derived microglia. A) Staining control (blue nuclei stained with DAPI). B) Iba1 expressing cells are shown in green. The cells were treated with a monoclonal mouse anti-Iba1 antibody, and a secondary donkey anti-mouse antibody labelled with AlexaFlour 488. 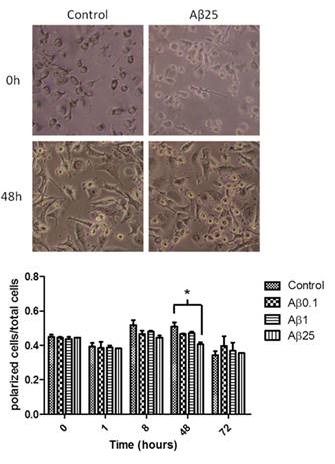