The aim of this project is to develop a novel, simple and inexpensive organ-slice culture system to simulate the repair of meniscal lesions from synovial tissue in vitro. The model would be established using the menisci of bovine cows slaughtered at a local abattoir. In the field of orthopaedic research, appropriatein-vitro systems have been developed to simulate the repair of cartilage and bone, but not that of meniscal tissue. And even in the engineering of the former two tissue types, an in-vitro system is usually employed merely to establish the feasibility of the contemplated repair strategy, viz., to demonstrate that the selected growth factors can induce the targeted precursor cells to differentiate and elaborate a tissue-specific extracellular matrix.
The meniscus is an intra-articular fibrocartilaginous disc. By distributing the stresses to which a joint is normally exposed over a broad area of the cartilage surface, this organ exerts a chondroprotective effect [1, 2]. It is comprised of solid and fluid phases. When the meniscus is compressed, fluid is forced through the solid phase. Since frictional drag is exerted on the fluid by the low permeability of the solid phase, the fluid becomes pressurized, thereby assisting in the carriage of compressive loads. The bulk of the meniscal tissue is avascular; only the peripheral portion is vascularized. With respect to knee-joint pathology, the menisci, next to the ligaments, are the structures most frequently injured [3]. Meniscal injuries can occur secondary to overt trauma, and can also arise from the alterations in knee-joint function that are associated with aging, osteoarthritis, rheumatoid arthritis, disturbances in gait [4-8] and obesity. Sixty per cent of individuals over 50 years of age manifest some degree of meniscal pathology.
If an appropriate organ-slice culture system could be established to model the entire process of cell differentiation, tissue formation and defect healing in vitro, then it would be possible to develop and refine a therapeutic principle for the repair of meniscal tissue without having recourse to living animals except at an advanced stage, namely, when it has been established beyond reasonable doubt that the strategy is likely to be valuable in the clinical treatment of human patients. The availability of such an organ-slice culture model would permit a very significant reduction in the requisite number of living animals, and would also curtail the time expended on pre-clinical investigations as well as their expense. These substantial benefits would render the model highly attractive to academic institutions, industrial partners and contract-research organizations.

The medial meniscus will be harvested from the knee joints of bovine cows slaughtered at a local abattoir (Fig.1). Synovial tissue will be excised from the medial side of the same joints. Slices of meniscal tissue, approximately 3 mm in thickness, will be produced using a specially designed tool.


Having successfully developed a suitable slicing tool and established that meniscal slices of reproducible thickness can be produced without inducing apoptotic cell death (and/or necrosis), we will then design and manufacture hollow cylindrical punchers with different diameters (satisfying the same cutting criteria as the slicing tool) to prepare discs of meniscal tissue from the slices and to produce an inner chamber that represents the defect (Fig.2).

Figure 2: Preparation of the chamber (defect) model from a slice of meniscal tissue.


Two synovial discs with the same diameter as the meniscal defect will be punched out and respectively affixed by gluing with Histoacryl (medical grade) to the upper and the lower surfaces of the chamber (defect) to ensure that its dimensions are maintained during the course of culturing (6 weeks). Having successfully produced the “empty” constructs of meniscal and synovial tissue, we will then establish appropriate conditions for their culturing (Fig.3). 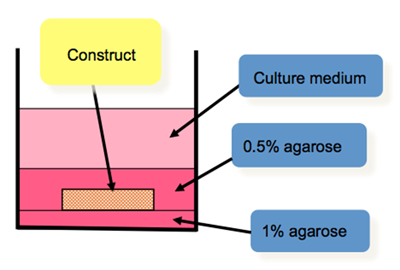 Figure 3: Culturing of the meniscal-chamber construct in agarose gel (cross-section).

If our conceived model of a meniscal defect could be practically realized on a reproducible basis, then it would afford not only a means of establishing almost exclusively in vitro the stimulation conditions necessary for the lesion`s repair from synovial tissue, but also a welcome opportunity to cut down on the number of experiments with living animals, which, incidental to the important ethical benefit, would also be financially advantageous.