Malaria continues to be an important global infectious disease for which mortality levels remain unacceptably high. The illness is caused by Plasmodium parasite, most often Plasmodium falciparum, which is transmitted to humans in sporozoite form by infected Anopheles mosquitoes. Drug therapy represents an important intervention in controlling the disease. However the parasite has become increasingly resistant to antimalarial drugs. In certain regions tolerance is now exhibited even to artemisinin-based therapy (1), which is widely considered to be the antimalarial of last defence. There is therefore an urgency to develop new approaches and technologies that speed up the creation of effective new drugs and, ultimately, vaccines against the disease. Despite advances in our understanding of P. falciparum and its intra-erythrocytic development, significantly less is known about the parasite’s exo-erythrocytic cycle in hepatocytes. A major reason for this shortfall has been the unavailability of suitably accurate in vitro models through which to study host-parasite hepatocyte development on a large-scale. Consequently, surrogate animal models based on related parasite species are widely employed. Through joint collaboration between the CSIR Biosciences and Material Sciences and Manufacturing Units, research was undertaken to engineer a novel 3D hepatocyte tissue culture system. This development was driven by a need to create new in vitro systems that correlate more closely with the in vivo liver state, providing a more reliable predictive model for research, in particular for investigating parasite-host interaction.

A number of technologies have been developed to facilitate our understanding of host-pathogen interaction through the creation of advanced in vitro cell culture models of human organ function. In this study we developed a proprietary three-dimensional scaffold-based system that is capable of supporting the growth of hepatocyte cells (and other anchorage-dependent cells) in an enhanced functional manner (Figures 1 and 2). 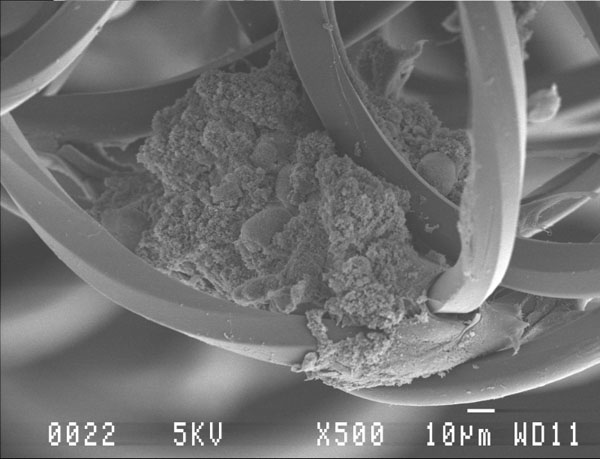 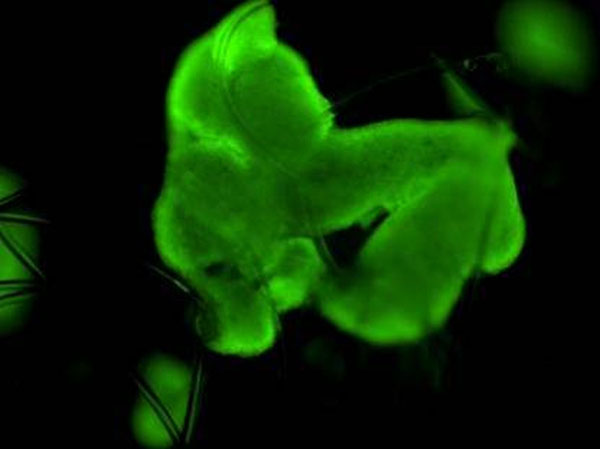 Visually, the system promotes the production of extracellular features not commonly observed in identical cells grown in 2D (Figure 1). This was confirmed through the use of high-throughput LC-MS/MS proteomics, which enabled us to comprehensively assess relative differences in intracellular and extracellular surface protein abundance and to identify those that are critical, together with other factors, to facilitating malaria sporozoite invasion and development (Figure 3). At the same time notable differences were observed in the abundance of proteins that are important in the metabolism of antimalarials and other compounds, raising implications around the metabolic assessment of such compounds in 3D versus conventional 2D cultures. In the case of antimalarials, important differences were observed in hepatocyte sensitivities (cytotoxicity) to representative compounds (Figure 4). 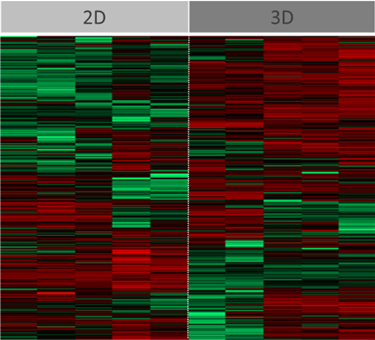 Figure 3: Analysis of HC04 cells grown in 2D or 3D to the point of differentiation just prior to infection. Differential abundance of multiple proteins was observed (red bar denoting an increase of a particular protein, green bar denoting a decrease); this notably included proteins involved in extracellular processes important in parasite invasion and development. 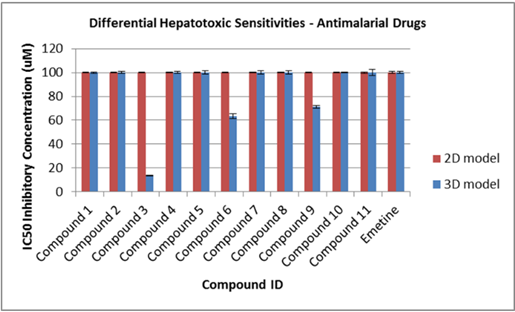 Hepatocyte cell lines (predominantly hNHEPS (Lonza, Basel, Switzerland) and HC04 (2)) were employed to facilitate infection by Plasmodium falciparum (strain NF54) sporozoites that had been isolated from Anopheles mosquitos following exposure to highly infectious gametocytes. Conditions were optimized through growth-factor supplementation based on knowledge gained from iterative tissue cell culture and investigative techniques such as proteomics (Figure 3), to achieve good relatively high rates of infection and stable development in both the 2D and 3D models (Figures 5 and 6). Infection rates were however observed to be statistically significantly higher in the 3D model. 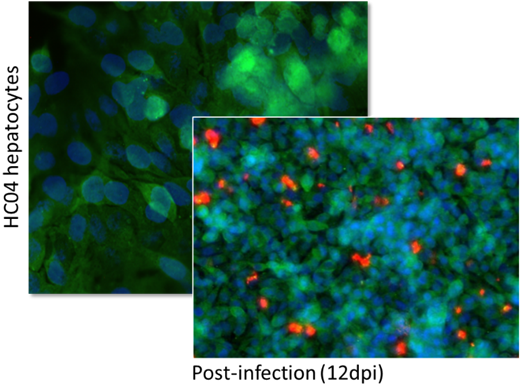 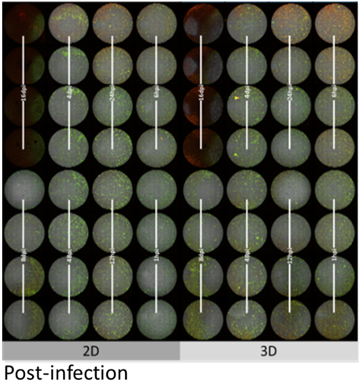 Figure 6: HC04 hepatocytes grown in 2D or 3D over a +/- 3 week period in quadruplicate per time point (1 hr, 6 hrs, 12 hrs, 24 hrs, 48 hrs; 4 days, 8 days, and 16 days post infection). Cultures were supplement ≥10 dpi with A+ red blood cells and monitored daily to assess parasite transition from the exo-erythrocytic to the asexual RBC stage

Model development and imaging workflow optimisation culminated in the assessment of merozoite viability by exposing mature merozoites from the system to conventional A+ human red blood cells (Figure 6, first quadruplicate panel set per condition). Successful merozoite invasion of red blood cells, and subsequent intra-erythtrocytic development in these cells, confirmed the validity of the in vitro model to support parasite invasion and development. Assessment and provisional model validation was performed using a panel of selected antimalarials; an example of one such compound screen performed in 384-well format is summarised in Figure 7. 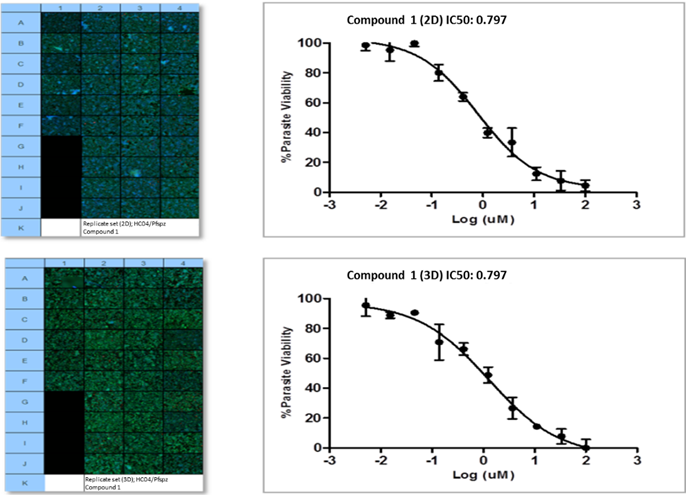 The goal of this project was to develop a 3D-based hepatocyte culture system that facilitates large-scale molecular analysis of the human form of malaria, P. falciparum, in this tissue. To date this area of research has largely relied on the use of surrogate animal models that utilize related species of this parasite. The in vitro system developed in this project efficiently supports Plasmodium falciparum (strain NF54) sporozoite invasion and development, enabling high-content microscopy imaging methods to be developed that enable qualitative and quantitative investigation of this exo-erythrocytic stage. Through exploiting the system new opportunities in malaria drug and vaccine discovery research will in future be possible.

Additional funding to support this work was provided by the CSIR, Pretoria, South Africa.