Background and Aim
It is desirable to reduce and replace animal experiments in the life sciences, while still being able to acquire biologically relevant data. Two-dimensional cell cultures offer easy maintenance and manipulation as well as high throughput compatibility. Their drawback is the important gap between such cultures and live tissue, as encountered in vivo. In vivo tissue consists of a complex three-dimensional arrangement of and interactions between a multiplicity of different cells and extra-cellular matrix components which are connected to the rest of the body by blood and lymph vessels. A step towards in vivo conditions is the use of three-dimensional cell co-cultures, where some approaches are also compatible with high throughput.

In vascular biology, the gap between in vivo conditions and cell cultures can be bridged using ex vivo blood vessel models. These models preserve the complex tissue structure, while allowing selected biochemical processes to be continuously monitored for milliseconds up to days. This means that data can be gathered at many points in time, which in classical animal models would be represented by sacrificing one animal for one time end-point. In atherosclerosis research, knock-out mice (apoE-/-) are widely used as animal models. Current ex vivo artery models involving such mice use peripheral arteries, whereas in classical in vivo atherosclerosis research it is mainly the aorta which is analysed.

In mouse atherosclerosis models, the aorta usually has multiple regions of diseased tissue, whereas for example carotid artery bifurcations normally do not have more than two regions, which also develop later. The novel method we present here therefore offers the advantages of (a) gaining more data in one experiment (compared with carotid artery models), thus sparing a certain number of laboratory animals, and (b) providing data which is directly comparable with existing data from classical in vivo experiments using aortas, therefore obviating the need for establishing a body of reference in vivo data for carotid arteries and consequently reducing the number of animals required.

Method and Results
We established a model for long-term culture including perfusion of the mouse aorta using PDMS (polydimethyl siloxane) as an embedding matrix (5). PDMS is biocompatible, transparent in the visible light domain and gas permeable. This enabled us to visualise the aorta using confocal time-lapse microscopy. The ApoE-/- mouse aorta was exposed using microsurgery. A conventional vein catheter was inserted into the mouse aorta from each side (aortic sinus through left ventricle and abdominal aorta). The aorta was then removed and embedded in the PDMS. After polymerisation for two hours, the aorta-PDMS block (Figure 1B) was linked to the specifically developed perfusion system (Figure 1A) and mounted in the culture chamber of an LSM710 confocal microscope. 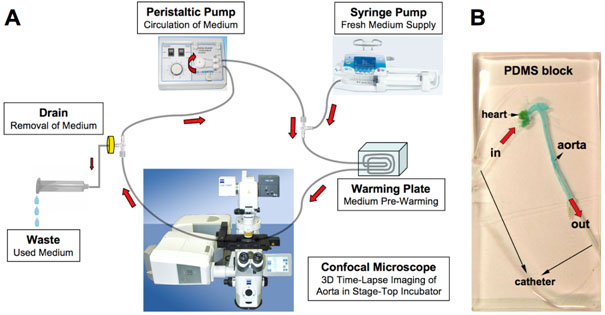 Figure 1: Diagram of artificial perfusion system (A): the aorta-PDMS block (B); the aorta was stained with blue food colouring.

Figure 2
(A) The Cy5-conjugated aptamer was circulated in the perfusion system and the fluorescent signal was observed under a confocal microscope for 20 hours. (B) The intensity of the fluorescence at one point (magenta) at different times varies and can be recorded. We defined three regions of interest in the image data generated from one experiment. The yellow rectangle corresponds to 'plaque area 1' on the time-line graph, the green one to 'plaque area 2'. The white rectangle serves as a negative control and corresponds to non-plaque vessel wall (grey line on the time-line graph). The scale bar is 100μm.

Immunohistochemical analysis of aorta cryosections revealed that the aortic tissue was still alive after 24 hours of artificial ex vivo perfusion with a cell-culture medium. To test the targeting of a cell receptor on mouse aortic tissue we perfused the atherosclerotic aorta of an ApoE -/- mouse with pre-warmed cell-culture medium containing 500 nM Cy5-conjugated aptamer for 20 hours. This aptamer is known to bind to a receptor on macrophages that reside in atherosclerotic lesions. We observed an increase of the fluorescent signal in the plaque regions, whereas the signal in non-plaque regions remained at a background level. The plaque signal curve reached a plateau after 3 hours (Figure 2A, 2B). 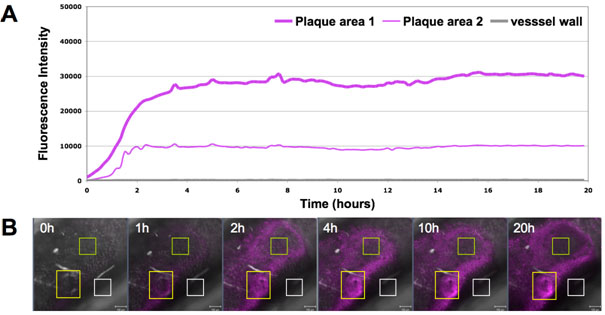 Conclusions and Relevance for 3R
We established an artificial perfusion system using aortas extracted from ApoE deficient mice in order to reduce the number of animals required for atherosclerosis studies (5). With this model it was possible to visualise in 3 D multiple atherosclerotic plaques in single isolated aortas using time-lapse confocal microscopy. This method thus enabled us
(i) to study the ligand-receptor interaction on the plaque area at different stages of severity,
(ii) to test the acute toxicity on the vascular tissue, and
(iii) to pre-select the concentration range for later tests in vivo, thus reducing the number of animals required to a minimum. Based on the success of this new model, it can be applied in efficacy, toxicity and biodistribution studies of nanomaterials in larger trials in the future, replacing conventional mouse experiments.