Metabolism as part of alternative testing strategies in fish

This project (No. 108-07) supported by the 3R Research Foundation explored the utility of isolated fish hepatocytes to predict bioconcentration[*], of lipophilic environmental contaminants in fish. The results demonstrate the value of a metabolically competent in vitro system such as isolated liver cells as part of animal-free testing strategies to in vivo assessment of chemical bioconcentration in fish.

Bioconcentration results from the competing rates of chemical uptake via gills and skin (k1) and chemical elimination via respiratory exchange (k2), fecal egestion (ke) and metabolic biotransformation (km) (1). In addition, dilution by growth (kd) can influence bioconcentration. With these different processes being involved, it is clear that non-animal approaches to bioconcentration assessment cannot rely on one single method, but need to be based on an array of methodologies (see reports of HESI Bioaccumulation Committee: 2, 3). A first approximation of the bioconcentration potential of an organic chemical in aquatic organisms can be provided by the hydrophobicity model, which considers bioconcentration as a passive partitioning of chemicals between the water phase and the lipid phase of the organism. Taking octanol as a surrogate for lipid, bioconcentration can then be predicted from the octanol-water partition coefficient, Kow. As an improvement of the hydrophobicity model, the PDMS-PAMPA method (Parallel Artificial Membrane Permeability Assay) (4) provides measured values for the passive diffusion processes governing xenobiotic uptake and elimination via gills and skin (5).

The aforementioned approaches can be used to obtain a reliable estimate of bioconcentration of non-metabolizable chemicals. They are not able to predict bioconcentration of chemicals that undergo biotransformation, however. Metabolically competent in vitro assays therefore have to be included in alternative testing strategies for fish BCF.

Hepatocytes are isolated from rainbow trout liver using a two-step-perfusion method (Fig. 1). Fresh suspensions of the isolated cells are then dosed with the test chemical and incubated over a 2-hour-period at physiological temperature (12-16°C). Samples are taken at regular intervals from the incubation medium and processed for chemical analysis. The rate of disappearance of the test compound from the incubation medium over time provides the intrinsic clearance rate (ml/h/106 cells). The 3R project placed much emphasis on optimizing assay conditions with respect to cell density, media composition and bioavailability of the test compound under in vitro conditions. 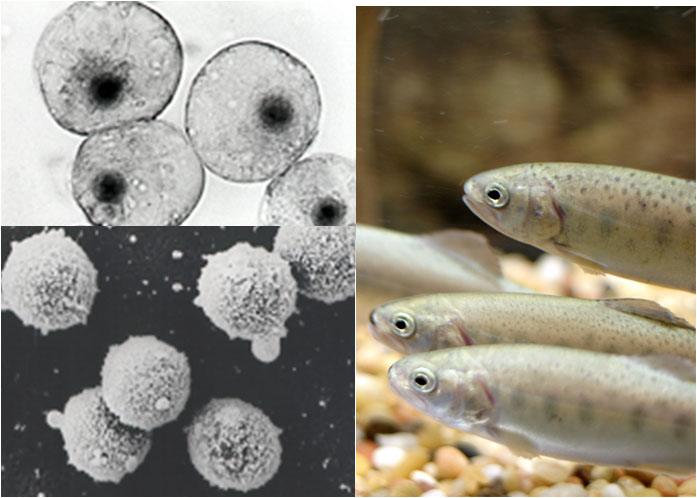 Prediction in fish via metabolic rates in isolated hepatocytes.

Physiologically based prediction models have to be used to extrapolate from the intrinsic clearance rate measured in the isolated trout hepatocytes to the metabolic rate km of the test chemical in the intact fish (6, 7). These models initially scale from the isolated liver cells to the clearance rate of the whole liver, and then to the metabolic transformation rate km of the whole fish (Fig. 2.). The predicted km value, together with estimates of passive uptake and elimination processes, as derived from the hydrophobicity model and the PDMS-PAMPA method, can then be used to calculate the in vivo bioconcentration factor (BCF) value of the test chemical. 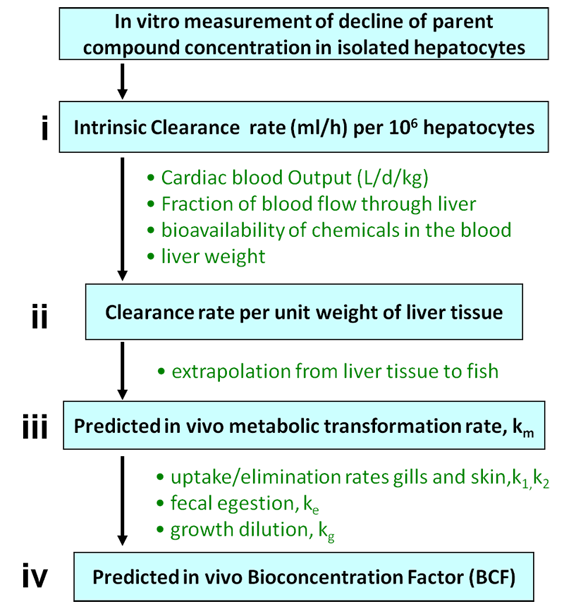 Does the fish liver cells assay come up to expectations?

Table 1 shows examples of predictions of in vivo BCF values for metabolizable xenobiotics from the trout hepatocyte assay. The results illustrate that the hepatocyte assay is able to correct over-predictions of bioconcentration of metabolizable compounds, as generated by the hydrophobicity model: Kow-based BCF predictions would have classified the substances as “bioaccumulative” while with the data from the hepatocyte assay, the substances are classified as “non-bioaccumulative”, which is in line with the results from in vivo bioconcentration testing.

Table 1: Influence of in vitro-generated metabolic rate values on the BCF.
Compared to values without assumed metabolism (km = 0, bioconcentration depends on uptake and elimination processes at skin and gills, together with fecal egestion and growth dilution), the BCF is 30 fold (all values in L/kg) for BaP and 4 fold lower for 4 NP respectively, when using km values predicted from hepatocyte in vitro tests. The ranges of predicted BCF values derive from two different models.

Towards acceptance and implementation

This project provides proof of the principle that using fish hepatocytes is a reliable method for correctly predict in vivo metabolic rates and therefore plays an essential role in a non-animal testing strategy for BCF assessment of chemicals. This in vitro strategy largely replaces the need to use living fish, shortens the test period for a given chemical compared to the in vivo test, is cheaper and allows in specific cases the mechanism of toxicity, e.g. the pattern of metabolites, to be investigated. Data obtained within this project will be published soon (8). The next steps that are needed to implement this test in the regulatory praxis are (i) to test a broader range of chemicals in order to learn more about the range of possible applications for the assay, and (ii) to perform inter-laboratory comparisons in order to validate the assay for its regulatory use. Both steps are being taken.

PDF version of this Bulletin No. 47