Bioconcentration of chemicals in fish can be assessed in vitro

In this project (No. 100-06), a new in-vitro system was developed for the bioaccumulation assessment of hydrophobic organic environmental pollutants in fish.[*] Twenty pollutants were tested. The measured membrane permeability in the in-vitro assay, called PDMS-PAMPA, was proportional to the passive elimination rate constant in fish. The in-vivo data were very close to predicted values from in-vitro except for metabolized chemicals. For this class of chemicals the PDMS-PAMPA can be coupled to an in-vitro metabolizing system using cellular fractions from fish liver. In addition, a model was developed to predict passive uptake/elimination rate in fish.

Hydrophobic pollutants, not an easy task

For PBT assessment in fish, the focus is on hydrophobic compounds. For these compounds the uptake and elimination by passive diffusion over biological membranes is more relevant than other pathways, such as paracellular diffusion or active transport. Uptake via gill, skin and surface as well as gut uptake are governed by similar passive diffusion processes but there are differences in the permeability barrier and the diffusion gradient.

Passive absorption and elimination through fish gills can be described by the parallel artificial membrane permeability assay (PAMPA)1. But this assay has to be tuned for hydrophobic chemicals, for which resistance of overall permeability is aqueous boundary-layer controlled. In order to overcome the difficulties associated with low aqueous solubility and high membrane affinity, the present modified new system called “PDMS-PAMPA” was developed. 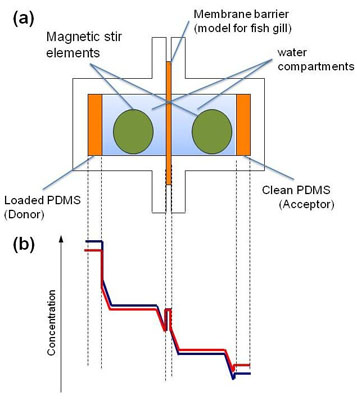 Fig. 1:
1a) Experimental set-up of the PDMS-PAMPA for hydrophobic chemicals.
1b) Typical concentration levels of a test chemical between and in the chambers and membranes at the beginning of the experiment (blue) and a few hours later (red)3.

Silicone is saving lives of fish

In the new assay, silicone disks (polydimethylsiloxane, PDMS) are used as a dosing and sampling system so that no determination of the aqueous concentrations becomes necessary2. The donor PDMS disk preloaded with the test compound is in contact with a water compartment and is cut off from an identical but clean acceptor PDMS disk by a thin PDMS membrane which acts as gill membrane model. (Figure 1). The thickness of the unstirred water layer (UWL) adjacent to all surfaces is adjusted by vigorous tumble stirring to physiological conditions in fish gills. This is a crucial step because for very hydrophobic compounds the rate limiting step of the overall uptake process is actually the slow diffusion through this layer and not the faster diffusion through the gill (model) membrane. Figure 2 shows how the glass cells are assembled and the tumble magnetic stir element is inserted. 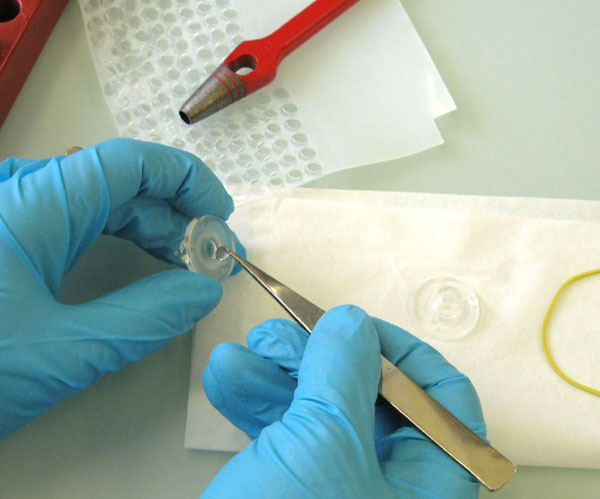 Fig. 2: Preparation of the PDMS-PAMPA system. The acceptor and donor PDMS were cut out from the PDMS sheet in the background (and cleaned prior to use) and inserted into a glass cell. The magnetic tumble stir bar is added before assembling the two half-cells with the thin PDMS gill model membrane in between.

The in-vivo data were very close to predicted PDMS-PAMPA values except for a few polar chemicals (presumably due to differences in hydropgen bonding) and the metabolically active chemicals, such as pyrene and benzo[a]pyrene.

A definitive advantage of the PDMS-PAMPA system lies in the fact that the prediction model to relate the in-vitro results to in-vivo is not just a best-fit model but is a theoretical model based on the underlying mechanistic processes of passive diffusion. Thus, PDMS-PAMPA will be a good in-vitro system for non-metabolizable chemicals. 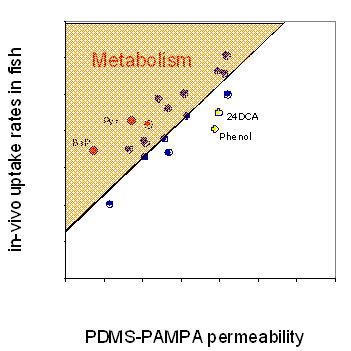 Fig. 3: Relationship between in-vivo uptake rate constants in fish and PDMS-PAMPA permeability. Outliers are benzo[a]pyrene (BaP) and pyrene (Pyr) due to additional metabolism and compounds with strong H-bonding properties, such as phenol or 2.4-dichloroaniline (24DCA)

As expected, compounds that are converted in the fish body (liver) into hydrophilic metabolites had a faster in-vivo elimination rate than the one predicted by PDMS-PAMPA3. Therefore it is necessary to combine the in-vitro assay for the passive diffusion of hydrophobic chemicals with in-vitro metabolism assay such as S-9 fractions from fish liver or isolated fish hepatocytes.

Benefits for the 3Rs

Bioconcentration assessment in fish is highly animal and labor intensive. According to the OECD test guideline 305 “Bioconcentration: Flow-through Fish Test“ 4 the test is performed during 28 days in two phases – uptake and depuration – with at least 9 sampling points using at least four fish each. Thus a minimum number of 40 fish is required for the determination of one bioconcentration in fish (BCF) value for one species and one chemical. The proposed in-vitro assay has the potential to for screening assessment and prioritization of necessary in-vivo testing.

With the PDMS-PAMPA system there is an in-vitro model for passive uptake available that can tackle compounds of concern, i.e. compounds of high hydrophobicity. The prediction model focuses on the prediction of passive uptake/elimination rate and needs to be further refined and validated with respect to metabolized compounds. After that it can become widely applicable for screening purposes and for deriving input parameters into in-silico models.

PDF version of this Bulletin No. 37