From blood to brain and vice versa: Transport processes in choroid plexus can be studied in vitro

Studying the choroid plexus (CP) epithelium[*] in living animals is difficult due to its complex morphology, anatomical location and small size. In the present project (no. 91-04), supported by the 3R Research Foundation, a primary porcine CP cell culture model was established and characterized as a basis for further research on the underlying mechanisms of organic anion transport across the CP epithelium in vitro.

The choroid plexus is atypical in its distribution of membrane proteins acting as transporters. Many transporters do not follow the functional pattern observed in kidney or brain endothelium; rather protein localization is reversed. Excretory transporters present at the basolateral membranes in kidney, liver or brain are distributed on the CSF-facing side in CP epithelia (apical) and efflux transporters are found at basolateral membranes. Thus, not only presence and density, but also the polarized distribution of relevant transport proteins has to be considered when examining transport at the CP. To date, a total of eleven transporter families with almost 30 individual proteins are known to be expressed at the CP2.

Establishment of the monolayer system

Epithelial cells from porcine CP were prepared from fresh CP tissue desintegrated into single cells as described1. Cells were seeded either on laminin-coated TranswellŪ filter membranes or in flasks. In general, CP cell growth was slow and proliferation rates were low. Addition of cytosine arabinoside suppressed growth of contaminating cells and epithelial cell cultures developed into an integer monolayer within 9 days in culture (9 DIC), displaying the typical cobblestone appearance. Then, serum was removed from the medium and monolayers were allowed to fully differentiate for another 4-5 days (14 DIC) as shown with specific markers such as for TTR mRNA and protein expression, alkaline phosphatase and γ-glutamyl transferase activities2.

The high rate of CSF secretion is fueled by rapid blood flow through the CP (5 ml/g/min), which is about tenfold faster than average cerebral blood flow. In vitro, the CSF secretion was analyzed with cells grown on 6-well TranswellŪ filter systems. 67 kDa FITC-dextran was added and secreted CSF volumes (in μl/cm2) calculated as a function of FITC-dextran concentration change.

Figure 1 shows CSF volumes secreted by cultured CPEC for up to eight hours. Volumes of CSF secreted by the cell monolayer increased and reached a plateau after five hours, with approximately 150 μl/cm2 produced. 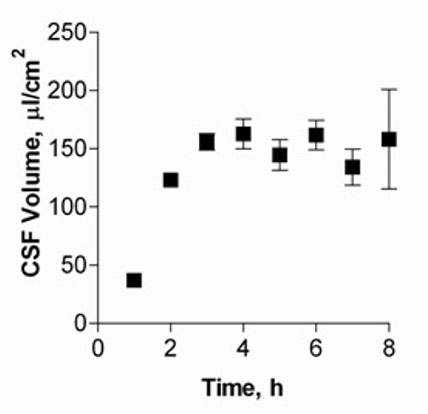 Values of CP monolayer transepithelial electrical resistance (TEER) were measured using the MillicellŪ-ERS and STX-2 electrode system before starting permeability analyses. In our porcine CP cell model, monolayers displayed TEER values in the range of 100 to 150 Ωcm2. For paracellular marker analyses, CP monolayers were incubated with 5-carboxyfluoresceine and FITC-dextrans of different size from either the apical or basolateral side and accumulation was measured in the corresponding compartment. Permeability coefficient values ranged from (4.56 ą 0.26) x 10-5 cm/s for smallest down to (1.42 ą 0.13) x 10-5 cm/s for largest molecules.

Active excretion by ABC efflux transporters (transporter proteins with ATP-binding domains encoded by the ABC-gene superfamily) not only removes endogenous metabolites and waste products from the brain, but also limits uptake and penetration of many therapeutic compounds. Two proteins contributing to multidrug resistance are of particular importance due to the diversity of compounds transported: the multi-drug resistance (MDR) phenotype Pgp, part of the ABCB subfamily, and Mrp1, part of the ABCC subfamily. Pgp and Mrp1 gene expression was analyzed on a qualitative and quantitative basis and the distribution and localization of both proteins on polarized CP cell membranes was determined. Comparative RT-PCR experiments from isolated CP tissue and cultured CP monolayers indicated the presence of Pgp, but fresh and cultured CP cells expressed Pgp mRNA at low levels. The signal for Pgp was weaker in cultured epithelial cells than in tissue. Mrp1 mRNA was also expressed in freshly isolated and cultured cells. In contrast to Pgp mRNA, there was no significant difference between Mrp1 gene expression in cultured cells 14 DIC and freshly isolated cells. Immunostaining indicated that the localization of Pgp in CP may be subapical and different from that in other epithelial cells and that Mrp1 was clearly present in CP epithelium. In vitro we demonstrated that Pgp is not functionally active in the membranes of the cultured cells, similar to findings in intact tissue whereas Mrp1 was active (Figure 2A and 2B). 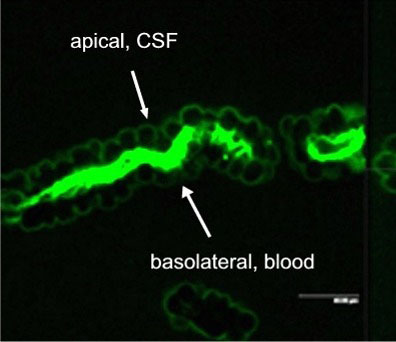 Fig. 2A: Excretion of Fl-MTX (Mrp-substrate) from brain to blood (=apical to basolateral) in intact CP tissue. 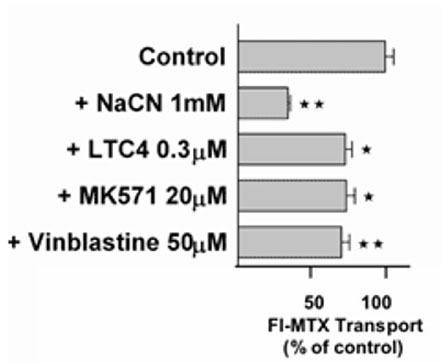 In order to interpret transport processes across the CP, appropriate models of investigation are required. In vivo techniques are complicated since they require surgical skill and it is difficult to monitor data. Common methods include the serial sampling of CSF after drug administration and deconvolution of data to determine transport profiles. Therefore, the development of adequate in vitro methods which allows the examination of drug transport from blood to CSF and vice versa is essential in order to reduce investigation in intact animals. In vivo studies allow only very limited insight into mechanistic aspects. Present data demonstrates that CP epithelium can be isolated and cultured, with cells growing into intact monolayers, fully differentiating and with properties resembling the tissue in vivo.

The present investigations in vitro provide the first data on Pgp and Mrp1 expression and activities without the use of animal experiments. An apical localization of Pgp in the CP trafficking certain substrates from blood into the CSF seems to oppose its action at the blood-brain barrier,. The lack of Pgp function would be in contrast to other organs such as liver, kidney, small intestine or blood brain barrier, where Pgp is documented to play a major role in efflux of compounds and/or transport into the bloodstream. Results obtained in vitro with Mrp1 function mimicked the distribution observed in vivo indicating that in CP epithelium Mrp1 may act as a barrier for certain drugs coming from the blood.

PDF version of this Bulletin No. 35