Generation of parasite cysts in cultured cells instead of living animals.

The protozoan parasite Neospora caninum is the most important infectious cause of abortion in cattle worldwide (Refs 1, 2)[*]. The bradyzoite stage of this parasite is infective by oral ingestion. Studies on stage conversion or anti-protozoal drugs have relied so far on animal models to produce bradyzoites. In the present project (Nr. 72-00), a method was developed to generate N. caninum bradyzoites in cell culture. This efficient and easy-to-handle in vitro alternative to producing N. caninum tissue cysts in animals will reduce the number of animals used in research on Neospora caninum and neosposrosis including the screen for anti-protozoal drugs.

N. caninum can live in two different forms within the cells of dogs and cattle: the actively proliferating, disease-causing, tachyzoite stage, and the bradyzoite stage that lies dormant in tissue cysts (Fig.1). A third form of the parasite, the oocyst stage, is a sexually produced and resistant form responsible for the transfer of the infection from animal to animal (ie. this form exists external to the host). The life cycle of the parasite has been partially elucidated (Fig.1). Most studies on N. caninum carried out to date have relied largely on animal models. So far it has only been possible to culture the rapidly proliferating tachyzoite stage in cell lines and primary monolayer cell culture systems. 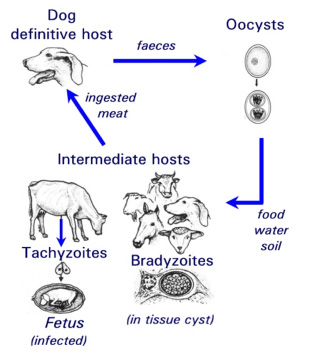 Until recently, research on the bradyzoite stage of N. caninum has been largely neglected. However there are two situations where bradyzoites represent a danger. Firstly, if the infected host becomes partially immuno-compromised, as occurs during pregnancy, bradyzoites are reactivated and transform to the rapidly proliferating tachyzoite stage. This can lead to an infection of the placental tissue and the fetus, resulting in acute fetal neosporosis and abortion. Secondly, in dogs that consume meat infected with N. caninum bradyzoites, the parasite can infect the intestine and undergoes sexual reproduction. This produces oocysts that are excreted in the faeces and contaminate soil, water and animal fodder. Thus, the epidemiology and disease-causing potential of N. caninum is indirectly influenced by the occurrence of bradyzoites within infected hosts, and strategies to prevent neosporosis must take into account all stages of the parasite, including bradyzoites.

The realization of the importance of this stage has led to the development of a mouse model to produce N. caninum bradyzoites. Usually artificially immuno-compromised mice are used, with obvious unpleasant side effects for these animals. In addition, the method is not very reliable, and requires large numbers of animals. A reliable in vitro culture model to generate N. caninum bradyzoites would therefore offer several significant advantages.

Experiments to achieve N. caninum stage conversion in cell culture are based on the rationale that the parasite converts from the tachyzoite to the bradyzoite stage when it is under stress. Under conditions of stress, the parasite stops proliferating, and expresses bradyzoite-specific antigens that lead to its encapsulation into a tissue cyst. The techniques described earlier to achieve in vitro bradyzoite differentiation of the closely related apicomplexan Toxoplasma gondii were not effective for N. caninum (Ref. 4) , thus other ways had to be elucidated. Initial studies involved a number of different in vitro culture stress conditions, such as alterations in temperature and CO2-concentrations, pH-variation, exposure to immuno-modulators such as IFN-gamma and TNF-alpha, anti-parasite antisera and nitric oxide treatment. In a second phase, a number of parasite isolates and a variety of host cell systems were tested, including organotypic cultures of rat neural tissue (this is important because it involves not a cell line but a rat neural tissue as an alternative approach) (Ref. 3). Finally, a reliable and efficient method to obtain N. caninum differentiation from the proliferative to the cystic stage was established (Ref. 4): murine epidermal keratinocytes were infected with tachyzoites of the Nc-Liverpool isolate, and the infected cultures were treated with a high dose (70 μM) of a nitric oxide donor (sodium nitroprusside (SNP)) for up to 8 days. Medium changes had to be performed each day during the culture period. As assessed by Neospora-specific quantitative real-time PCR (Ref. 5), this treatment significantly reduced parasite proliferation. An upregulation of the expression of bradyzoite-specific antigens was detectable by immunofluorescence using antibodies directed against the bradyzoite-specific antigen NcBAG1, and in parallel, a downregulation of the expression of tachyzoite-specific immunodominant antigens such as NcSAG1 or NcSRS2 (Fig. 2). After 8 days of SNP treatment, the cyst wall antigen NcCC2 was secreted by the parasites and became associated with the cyst periphery (Fig. 3). Transmission electron microscopy revealed that these parasites were always located within intracellular compartments called parasitophorous vacuoles, and that the majority of the parasites within intracellular vacuoles were in the process of forming a distinct cyst wall, typical for the bradyzoite stages Fig. 4) 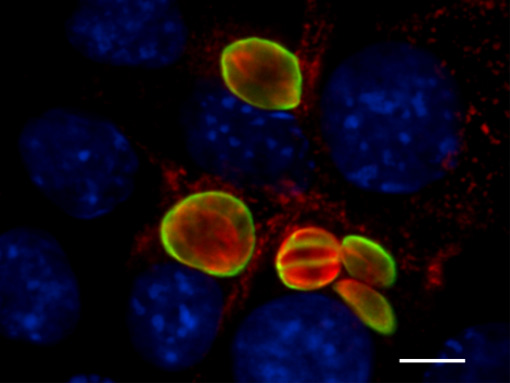 Fig. 3: Effects of SNP treatment (8 days) on expression and localization of the cyst wall antigen NcCC2 (green) with the periphery of the bradyzoite-containing vacuoles, which is indicative for cyst wall formation, Parasites are labelled in red, host cell nuclei are blue. Bar = 12 μm

Fig. 4: Electronmicroscopical comparison of N. caninum tachyzoites (A) and bradyzoites (B) cultured in vitro. Note that both stages are located within an intracellular vacuole, but bradyzoite vacuoles (B) exhibit a defined cyst wall (thick dark structure between the arrows), which is lacking in tachyzoites (A) (cf. arrows). Bars = 1,3μm in (A) and 0.8 μm in (B).

Although the keratinocyte culture system was efficient, with about 60% of parasitophorous vacuoles containing parasites expressing the bradyzoite marker NcBAG1 and therefore designated as bradyzoites, the system was not practical to produce large amounts of N. caninum bradyzoites for biochemical, molecular or functional infection studies. A modified procedure was therefore developed which enabled us to produce, far more economically, N. caninum bradyzoites in African green monkey kidney (Vero) cells (Ref. 6). In this system, stage conversion occurs at a much lower concentration of SNP (17 μM), a concentration which is tolerated by Vero cells for a limited time, but still leads to bradyzoite differentiation in about 60% of the parasites (Fig. 5). Additionally, a protocol, based on selective physical rupture of infected host cells and separation of host-components and intact bradyzoites by size exclusion chromatography, was elaborated to purify these bradyzoites from cell cultures. This has now opened avenues to dissect this important life cycle stage of the parasite at the biochemical and molecular level.

The 3Rs go together with higher scientific output.

The goals relevant for 3R have been achieved in that we provide a promising, efficient and easy-to-handle in vitro alternative to producing N. caninum tissue cysts in animals. This method will reduce the number of animals used in research on Neospora caninum and neosposrosis. The N. caninum bradyzoite tissue cyst model is currently used to: