Chemical regulatory programs worldwide require the assessment of the risk of chemicals to man and the environment based on three categories of concern: Persistence, Bioaccumulation and Toxicity (PBT). For aquatic organisms, bioaccumulation of chemicals is assessed by means of a standardized in-vivo bioconcentration test with fish (OECD Test Guideline 305). The OECD 305 test determines the bioconcentration factor (BCF), which represents the ratio between the chemical concentration in the fish and the chemical concentration in the water (under steady state conditions). The test involves prolonged exposure periods (> 50 days) of animals, high costs and high animal use (> 100 fish).

As an alternative to the in vivo fish test, the BCF can be predicted by means of in-silico methods from the lipophilicity of the chemicals (Arnot and Gobas 2006, Nichols et al. 2007). This approach works well for lipophilic chemicals which do not undergo biotransformation in the organism, however, it overestimates BCF values of xenobiotics which are metabolized (Lombardo et al. 2014). Such overestimates could be corrected by in-vitro biotransformation assays which identify the metabolizable compounds. The combination of in-silico methods with in-vitro metabolism assays in an Integrated Testing Strategy (ITS) has the capacity to largely reduce if not to replace in-vivo BCF testing with fish (de Wolf et al. 2007, Weisbrod et al. 2009, Lombardo et al. 2014). A drawback to this approach is that the in-vitro methods are not yet validated and implemented.

Previous studies, also with support of “Stiftung 3R”, succeeded in standardizing an in-vitro metabolism assay with isolated hepatocytes of rainbow trout (Fay et al. 2014). In addition, it was demonstrated that the in-vivo BCF values of chemicals in fish can be reasonably well predicted from the in-vitro metabolism data. While the available in-vitro methodology has been developed exclusively for rainbow trout (Oncorhynchus mykiss), in-vivo BCF testing relies on a broad array of cold- and warm-water species. Which species is actually used for testing may vary with geographic regions, for instance, while Northern European countries prefer rainbow trout, Asian countries such as Japan and China prefer carp. Hence, having an in-vitro assay available for only one out of these many species would severely restrict the applicability and acceptance of the in-vitro alternative. The proposed project will overcome this limitation by demonstrating the transferability of the in-vitro methodology developed for the cold-water species, rainbow trout, to the warm-water species, the common carp (Cyprinus carpio). This will serve as proof-of-principle that the applicability of in-vitro metabolism assays is not limited to one specific fish species. More specifically, the project objectives are

-       To examine whether the in-vitro methodology developed for rainbow trout hepatocytes is transferable to other fish species (here, the carp) used under OECD TG 305;

-       To examines whether species differences in xenobiotic metabolism which exist in-vivo, are reflected by the in-vitro hepatocyte assays.

In addition, it will be explored whether the in-vitro hepatocyte assay is useful not only to determine metabolic rates but also to identify metabolite patterns.

The currently established protocol of the in vitro-metabolism assay using fish hepatocytes assay is intended to predict in vivo-metabolism rates of xenobiotics; it is not intended to identify the metabolites arising from biotransformation of the parent compound. For biocide regulatory testing, however, metabolite data are required. Therefore, the question arised whether the in-vitro metabolism assay may provide an efficient tool for metabolite identification. It is well known that metabolite spectra can differ strongly among fish species, and this can have major implications for chemical toxicity. Thus, we examined the suitability of the in vitro assay with fish hepatocytes to provide information on species-specific metabolite patterns. The results clearly demonstrated that this is the case: differences of metabolite spectra existed between isolated trout and carp hepatocytes, and, importantly, the in-vitro differences well reflected the in vivo differences between the two species.

The project provided two deliverables. First, it highlighted that interspecies differences of xenobiotic metabolic rates as they exist in vivo, can be predicted from the respective in vitro systems. Interspecies scaling of in vitro metabolism data has been found to be a critical issue in human toxicology, and this question for fish must be addressed in fish as well. Here, the results of the present project represent an important step forward as they point to the transferability of the in vitro assay across species. This information is critical with respect to the acceptance of the in vitro hepatocyte assay for reduction or replacement of the in vivo bioaccumulation test with fish.

Second, the project demonstrated the utility of the in vitro hepatocyte assay to inform on species differences in the metabolite pattern. This information is of relevance for biocide regulations and could open an avenue to introduce in vitro approaches also in that part of chemical regulations.

Publications
Bischof I, Köster J, Segner H, Schlechtriem C (2016). Hepatocytes as in vitro test system to investigate metabolite patterns of pesticides in farmed rainbow trout and common carp: comparison between in vivo and in vitro and across species. Comparative Biochemistry and Physiology 187C: 62-73. 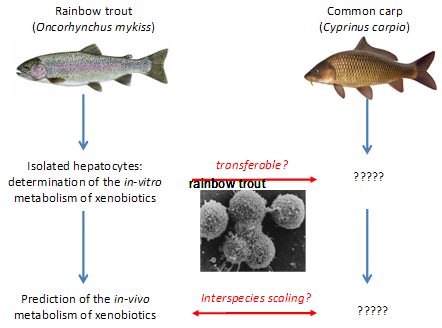