Background and Aim
Much of the knowledge about the dynamic functioning of the central nervous system (CNS) has come from invasive animal experiments in which parts of the nervous system are electrically monitored, stimulated or destroyed. For obvious ethical reasons, there is an increasing interest to replace the invasive approaches by less invasive ones.
While several non-invasive neuroimaging modalities have been developed in the last years, none of them is yet able to substitute invasive animal recordings aimed to monitor electrical activity at the single cell/population level. High spatial resolution techniques such as the fMRI lack temporal resolution and fail to provide a complete, clear account of spiking activity as measured in animals. The Electroencephalogram (EEG), likely to be the most direct correlate of neural activity that can be obtained non-invasively, lacks spatial resolution providing information limited to the scalp surface. The issue of the spatial resolution of the EEG can be circumvented by the use of physico-mathematical approaches capable of providing direct estimates of the neural intracerebral activity at the population level [1]. While this is yet far away from the information contained in the spiking activity recorded with neural implants, recent studies using simultaneous invasive recordings of spiking activity and scalp EEG suggest that there is a link between the phase of oscillations recorded at the macroscopic level and the spiking activity of cell populations. One goal of this project is to confirm this relationship in humans or in other structures different from the visual cortex in primates. This could serve to significantly enhance the spatial resolution that can be ultimately achieved with a method termed ELECTRA [2], which we have previously developed to estimate intracerebral activity from scalp EEG.

Method and Results
in progress (present status)
Recent technological advances are starting to allow simultaneous recordings of neural activity at different spatial scales in behaving animals. In one of this studies [3] published at the end of 2009 by Whittingstall and Logothetis, it has been shown that MUA in the primary visual cortex of monkeys can be predicted from the increases in the power of gamma band activity recorded at the scalp surface (i.e., EEG) occurring during the negative phase of the delta band oscillations. The fact that the phase of slow oscillations in the delta/theta band is a key element to understand spiking activity is indeed not new and has been locally observed in diverse structures in animals [4] and humans [5]. The main merit of the Whittingstall and Logothetis study is indeed to show that such links between the phases and power of the oscillations to spiking activity of populations still holds true for scalp EEG measurements. To combine this recent experimental evidence with the ELECTRA approach proposed in our group to estimate field potentials from scalp measurements (Figure 1), we need to verify that this relationship also holds for other brain structures in humans and primates. 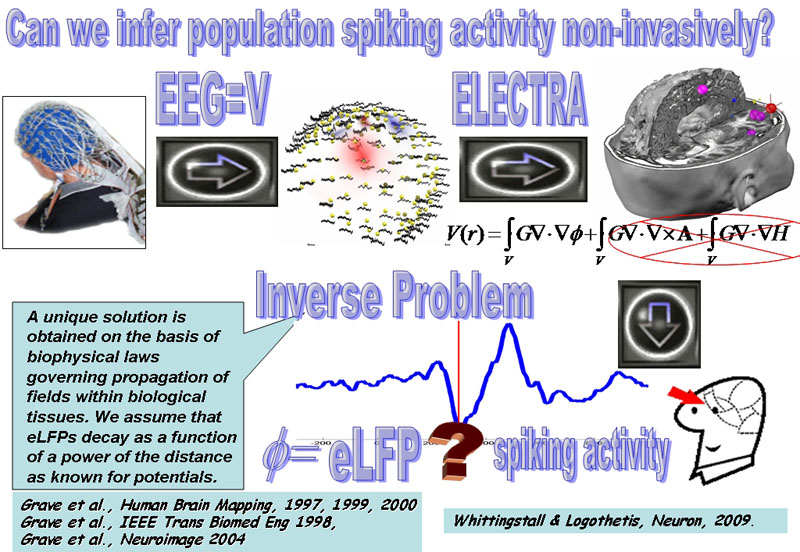 Figure 1: Main schema of the project:
The scalp recorded EEG provides the most direct correlate of neural activity that can be obtained non-invasively but lacks spatial resolution providing information limited to the scalp surface. However, it can be mathematically proven that scalp recorded potentials (V) relate to intracerebral field potentials (F) proportional to the invasively recorded Local Field Potentials (LFP) in animals. This relationship is at the basis of a source model called ELECTRA that can be combined with physical and mathematical constraints to solve an ill-posed inverse problem and estimate LFPs within the brain (eLFP). While this is yet far away from the information contained in the spiking activity recorded with neural implants, recent studies using simultaneous invasive recordings of spiking activity and scalp EEG suggest that there is a link between the phase of oscillations recorded at the macroscopic level (eLFP) and the spiking activity of cell populations. We would like to confirm this relationship in humans and in other structures different than the visual cortex in primates to evaluate whether and how well could we estimate population spiking activity non-invasively.

Figure 2
Relationships between delta phase (z-score) and amplitudes within different frequency bands recorded by an electrode in the central nuclei of the amygdala and MUA activity recorded in the basal nuclei of one awake primate (maccaque mulata). Note that modulations in the delta phase and gamma power in the central nuclei accompany MUA decreases in the basal nuclei. There is no clear increase in gamma power. This finding confirms a dissociation between delta phase and MUA.

Figure 3
Relationships between delta phase (z-score) and amplitudes within different frequency bands recorded by an electrode over the occipital cortex in a healthy human subject performing a visual discrimination task. Note that changes in delta phase accompany stimulus onset but there are no significant increases in gamma power.

The analysis of simultaneous EEG/LFP and MUA recordings in rats and primates indicate that the relationship between delta phase changes, increases in gamma power and MUA activity is not ubiquitous. As shown in Figure 2, there can exist significant changes in the phase of delta oscillations (here shown for the central nuclei of the amygdala of awake primates) that bear no relationship with significant increases in gamma power but instead correlate with decreases in spiking (MUA) activity (within the basal nuclei).Modulations of the phase of delta oscillations at the time of stimulus (varied images of different emotional content) onset (zero time) are however significant and last for around 200 ms.

A similar situation is observed in humans. As shown in Figure 3, recordings over the occipital cortex in a healthy volunteer performing a visual discrimination task (onset f the stimuli at zero) indicate that changes in the phase of delta oscillations are a systematic marker of evoked neural responses. However, no significant increases are seen in the power of other frequency bands.

The main idea behind the project is to combine ELECTRA approach to determine intracerebral field potentials with the link between phase/power of neural oscillations and MUA disclosed in [3] to obtain non-invasive estimates, even if rough, of population spiking activity. This is certainly an ambitious goal and several steps are required before we can claim that this is indeed feasible. The first aspect that needs to be evaluated is whether the same or different relationships between frequency bands and MUA holds true in other neural structures (e.g., amygdala) or different species (humans instead of monkeys). Otherwise, we will need to identify the valid relationships through the analysis of concomitant invasive recordings of field potentials and MUA in different structures and species.
To confirm the link phase-power of the oscillations with spiking activity we will rely on simultaneous LFP/MUA recordings in primates’ amygdala and invasive recordings in epileptic patients. In parallel, we will compute intracranial field potentials from scalp EEG data using ELECTRA source model. The estimates of field potentials will be transformed into the time frequency domain using the S-transform to compute phase/power relationships over the gray matter (see [2] for details).
To investigate the resolution achieved in the non-invasive estimates, we will initially assume that the Whittingstall and Logothetis proposed relationship always holds true. We will therefore consider that a voxel carries substantial information about MUA when a significant increase in gamma power accompanies the negative-going phase of the delta oscillations. Resolution will be then estimated from the spatial dispersion around the voxel showing maximal activation for each area (most active voxel). The spatial dispersion is characterized by the spatial extent occupied by voxels fulfilling the Whittingstall and Logothetis condition. If novel relationships between LFP phase/power and MUA are disclosed by the analysis of intracranial data in monkeys and humans, we will repeat the resolution analysis previously exposed. This procedure will then allow us to assess whether and how well can we estimate population spiking activity non-invasively.

Conclusions and Relevance for 3R
The analyses of data from different animal species including humans indicate that there is a dissociation between delta phase-gamma power and MUA activity. To account for the observed experimental results we are currently developing a biophysical model to explain the generation of the macroscopic EEG/LFP signals and their relationship to action potentials. In the new formulation we drop the quasistatic approximation [6] and replace it by a dispersive model of neural tissue. The preliminary simulations indicate that this model is compatible with the electrophysiological recordings and explain the systematic phase locking of action potentials to ongoing oscillations in the short spatial scale as well as current experimental data. On the light of this model we will need to modify the whole physical-mathematical formalism behind the formulation of the EEG which serves to determine its sources via the solution of the inverse problem. However, according to the proposed formalism the EEG conveys more direct information about action potentials than currently thought. This observation could therefore significantly enhance the probability of imaging non-invasively the spiking activity in the CNS.