Artificial implants are now commonly and routinely used in clinical practice, for instance, in dentistry, orthopaedics and cardiology. In recent years, biocompatible and biodegradable polymers have been developed for a variety of clinical applications, for example, as artificial heart valves, artificial blood vessels and occluders. Biodegradable polymers support the healing process in so far as they undergo degradation within the targeted biological milieu. The immunocompatibility of implant materials is currently tested in animal models by an analysis of immunorejection. In these animal models, typical signs of an inflammatory response are analyzed, for instance, diarrhea, loss of hair, a hooked posture, lethargy and an increase in the circulating population of leukocytes. Conventional biocompatibility testing is also performed in vitro using cultures of usually one cell type (e.g., fibroblasts). After the cells have been plated on the polymeric material to be tested, their adhesiveness, proliferative capacity and viability are evaluated. However using this conventional in-vitro testing system, the inflammatory response that is evoked in vitro by the interaction of the polymeric material with the host tissue cannot be assessed.

The aim of this project was to develop an in-vitro system to assess the biocompatibility of newly-developed implant materials, which could be implemented as a viable alternative to testing in living animal models.

In this project, embryonic stem cells were used to generate an immunocompetent vascularized tissue (Inflaplant) which displays a cellular inflammatory response to specific materials, thereby permitting the gleaning of information appertaining to the biocompatibility of the tested product. The interaction between the embryonic stem-cell-derived tissue (embryoid bodies) and the particles of the polymeric material was achieved in “hanging-drop“ cultures (Figure 1, A-C). The polymeric materials were developed and provided by Innovent Inc. (Jena, Germany).

Figure 1: Generation of INFLAPLANT. Confrontation cultures derived from murine embryonic stem cells and particles of a polymeric material. The embryonic stem cells were dissociated and seeded into a spinner-flask culture (A). In this cell culture, the cells form embryoid bodies (B). On day 10, the embryoid bodies were removed from the spinner flask and inoculated into the “hanging drop” containing polymeric particles of similar size (C). Following an adhesion time of 48 hours, the adherent cells and the particles of the material were transferred to cell-culture dishes.

Using a material that is deemed to be poorly biocompatible, such as PVC-lead, a substantial reduction in the CD31-positive area was revealed (Figure 2A). Using one that is believed to be highly biocompatible, the CD31-positive area was well differentiated and well connected (Figure 2B). Furthermore, using another material that was suspected of being poorly biocompatible, the percentage of dead cells­­­ – assessed using an ethidium-homodimer – increased (Figure 2C). The dimensions of the maximal and minimal extensions of the embryoid bodies that were co-cultivated on the tested polymer varied in accordance with the postulated biocompatibility of the material during a defined time-window (Figure 2D). Also the differentiation and the behaviour of the inflammatory cells (e.g., the CD68-type, which is a marker for macrophages) is potentially suggestive of the biocompatibility of the material that undergoes embryoid-body-based compatibility testing (Figure 2, E and F). A material that induces an inflammatory response potentially leads to the stimulation of cytokine secretion in the medium, as shown in Figure 3 (A-F). 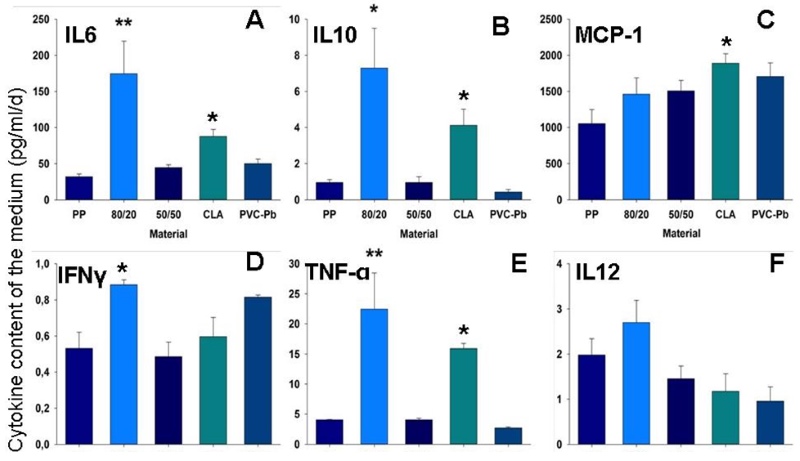 The in-vitro embryoid-body system is suitable for examining the influence of biomaterials on living structures. The elevated differentiability, and hence the high reactivity of the embryoid bodies, permit statements to be made concerning changes in the cells after their confrontation with the material in the hanging drop.

The development of a 3-dimensional and multicellular in-vitro model for the testing of a tissue’s inflammatory response and of cellular retraction during its exposure to biodegradable polymers will help to cut down on the number of animals that are currently employed for testing purposes under in-vivo conditions.