Background and Aim
Gliomas account for more than 70% of all brain tumours, and of these, glioblastoma is the most frequent and malignant histological type. Fewer than 3% of glioblastoma patients are still alive at 5 years after diagnosis. Recently, there has been important progress in our understanding of the molecular pathogenesis of malignant gliomas, and especially the importance of cancer stem cells. Models are central to allow the transition from scientific concepts to the understanding of the reality of a tumour in a person. They may be used for therapeutic screens, in preclinical trials, or to study the basic biology of brain tumours. Injection of glioblastoma cells either subcutaneously or directly into the animal brain, usually using immunodeficient strains such as Nude or SCID, or transgenic mouse models spontaneously developing brain tumours, allow in-vivo modelling with similar histopathology, etiology, and biology. These mouse models are widely used but, unfortunately, these available model systems are very aggressive for animals (infections, painful, severe motor and behavioural symptoms). In addition, such animal models do not reflect the real interaction between tumoural cells and the host that occurs in the human tissue. Indeed, human tumour cells are generally injected into an animal brain. Thus, new models that (i) replace animal experiments and (ii) provide a more relevant tumour/host interaction are needed.
Using the technology of embryonic stem cells (ESC), we propose to create an integrated and fully in-vitro model of a human glioblastoma developing within a human brain tissue. To achieve this goal, we will combine two technologies already available in our laboratory: (i) ENT technology: We recently developed in our laboratory the technology of Engineered Neural Tissues (ENTs). ENTs are reconstituted brain-like tissue pieces derived in-vitro from human embryonic stem cells (Preynat-Seauve, O. et al., 2008.). (ii) EGT technology: in parallel, using the same technology as ENTs, we have developed EGTs (Engineered Glial Tumors). EGTs are a model of reconstituted glioblastomas in three dimension derived in-vitro from patient brain tumour samples (Preynat-Seauve, O. et al., 2008.). We propose to combine ENT and EGT technologies in order to develop a fully in-vitro model of a human glioblastoma growing within a human brain-like tissue. This method will provide a powerful human model for the study of glioblastomas replacing animal models.

Method and Results
in progress (present status)
The technology to generate in vitro brain-like tissues (Engineered Neural Tissues or ENT) was already established in the laboratory, as well as the method to generate glioblastoma-like tissue (Engineered Glial Tumor or EGT) from patient tumor samples (gliomaspheres or GS). The aim of the first part of the project is to associate physically ENT with EGT in order to modelize tumor development within a host nervous tissue. To associated ENT with tumor samples, we have tested two approaches : (i) produce ENT and EGT separately before their association (ii) deposition of GS on ENT. To distinguish the tumor from the host tissue (ENT), GS were transduced with the red Tomato Fluorescent Protein (TFP) using the lentivector technology. In both cases, glioblastoma-derived cells survived in ENT and expanded, generating a red fluorescent cell mass within ENT. GS derived from three different tumor samples were tested: 2 glio-neuronal tumors otained at the university of Paris, France (TG1, TG6, Dr Hervé Chneiweiss), one high grade glioblastoma (GB1), obtained at the university of Nice, France (Dr Thierry Virolle and Dr laurent Turchi). The three types of GS survived and developped within ENT.
Sections from the obtained tissues were analyzed by histology. Several important features of glioblastomas and glio-neuronal tumors were observed.
In contrats to other brain tumors, glioblastomas and glio-neuronal tumors diffusely infiltrate the brain, rather than "push" the host tissue. Histological analysis of engineered ENT/tumors showed the presence of numerous individual single tumor cells (TFP+) infiltrating in a diffuse manner the host tissue. As a consequence, secondary TFP+ tumor sites at distance of the implantation site were systematically observed, mimicking the frequent local "metastasis" observed in patients.
The presence of large necrotic/apoptotic areas in constantly observed in patients and it is one important criteria for the histopathological diagnosis of glioblastoma and glio-neuronal tumors. Hemalun/eosin coloration, TUNEL staining and immunoreactivity against activated caspase-3 confirmed the presence of large apoptotic areas around the tumor.
Three different independant neuropathologists from different institutions analyzed the tissue samples and confirmed their strong similaritiesd with the in vivo situation . We have performed immuno-phenotyping of the engineered tissues and found in the TFP+ region numerous markers frequently expressed by the tumor in vivo (GFAP, vimentin, nestin, betaIII-tubulin, Sox-2, Musashi-1, EGFR, neurofilament, NeuN). Also, the tumor expressed the proliferation marker PCNA, indicative of a high mitotic index like the in vivo situation.

Conclusions and Relevance for 3R
The development of such model which:
- is new
- mimics significantly the in vivo situation
- includes cells only from the human species
is expected to reduce animal experimentation for the study of glioblastomas. It should be very promising to extrapolate such studies to other tumors of the central nervous system. 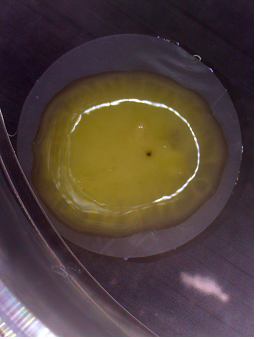 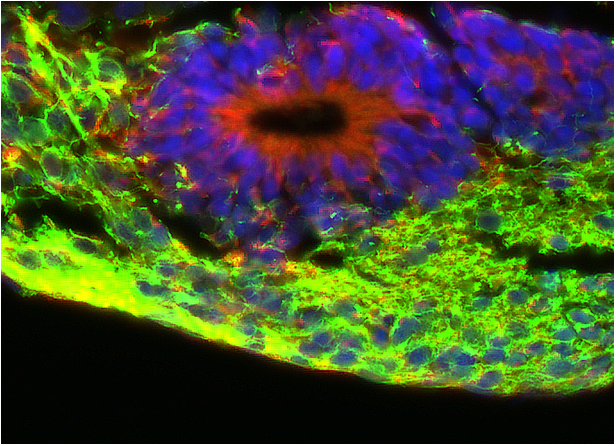