Background and Aim
Tissue engineering offers potential solutions to the clinical challenges of cartilage repair and regeneration. Animal models are still widely used in evaluation of tissue engineering strategies for the repair of damaged human articular cartilage. However, there is no consensus on the most appropriate animal model and none of the species used replicate the anatomical, cellular and biomechanical properties of human articular cartilage. A further major problem is the poor integration of newly implanted engineered cartilage with adjacent healthy tissue (1, 2). Without full integration into native cartilage, the implants will experience abnormal mechanical stress during their post-surgical maturation and remodeling, potentially leading to further damage to both new and adjacent tissue and thereby limiting the efficacy of the repair. Application of mechanical stimulation to engineered tissue has been reported to enhance cartilaginous matrix formation and improve tissue growth (3-5). However, despite reports of improvements in the quality of in vitro engineered cartilage tissue, there is a lack of information about whether these ‘better quality’ engineered tissue constructs ever achieve successful lateral integration between repair tissue and adjacent cartilage after implantation.

A major aim of this study was to contribute to a reduction in animal experimentation by establishing a novel, holistic in vitro model to investigate tissue induction, remodelling and lateral integration to adjacent cartilage after cell-scaffold constructs are implanted in cartilage defect sites. This model would be used as an in vitro screening capability for newly developed technologies intended for cartilage repair, thereby not only reducing the numbers of animal procedures but also, in some cases, replacing entirely certain specific procedures that are currently carried out in vivo.

Method and Results
We developed a novel 3-D co-culture model for in-vitro evaluation of tissue-engineering techniques intended to provide constructs for cartilage repair. This model consists of a cartilage explant in the form of an annular disk, into which is inserted the engineered tissue construct (implant) intended for cartilage repair. Each construct, maintained sterile in culture, was exposed to cyclic compressive loads (CCL) over prolonged periods in our specially designed bioreactors. The preliminary loading regime used was within the physiological range at 0.2Mps, with a frequency of 0.5 Hz, applied for 30 minutes per day, 5 days per week for up to 9 consecutive weeks. Identical constructs were cultured in the bioreactor chamber without application of CCL and used as controls. Cell viability was assessed with confocal microscopy. Maturation of the implant tissue was evaluated biochemically and histologically. Mechanical properties of the constructs were measured in the form of their compressive modulus. The integration between engineered tissue and surrounding cartilage was also evaluated histologically.
Over 160 bovine cartilage explants were seeded on to scaffolds to provide constructs for testing in the above model. Two types of scaffolds were tested within the constructs:

(1) Non-absorbable scaffold made of non-woven filamentous polyester (PET). Chondrocytes from bovine knee cartilage were seeded onto PET scaffolds, encapsulated with 1.2% alginate gel and implanted into the central holes of cartilage rings and subjected to CCL at the above loading regime for 9 weeks. Identical constructs were cultured in the bioreactor chamber without application of CCL (controls). Constructs were investigated at 4 and 9 weeks.

(2) Bioabsorbable scaffold made of Type-VII low melting agarose (Sigma, St. Louis, MO) was dissolved in culture media, autoclaved, then mixed with chondrocytes at 37°C to a final gel concentration of 2% (w/v). The resulting constructs were implanted into cartilage rings and were subjected to CCL as described previously in (1) above.

Figure 4
Hydroxyproline content of PET constructs ± CCL, expressed as total hydroxyproline per microgram of DNA (n=6). No significant change after CCL application at both time points.

Figure 6
Confocal microscopy of agarose constructs in co-culture at week 4, better integration was observed after CCL (A) compared with controls (B).

Figure 7
GAG synthesis within agrose constructs ± CCL after 4 and 8 weeks in culture, expressed as total GAG per microgram of DNA. (n=6): *, p<0.05. CCL increased GAG synthesis at both time points.

Confocal microscopy showed partial integration between the implants and adjacent cartilage with greater integration in the CCL group at both 4 and 9 weeks (Fig. 2). 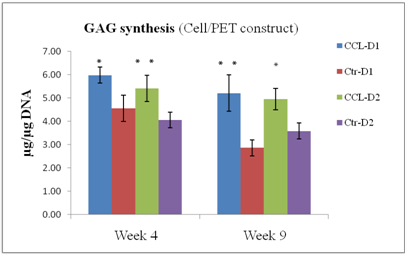 No significant change after CCL was observed in total collagen content per µg DNA as determined by hydroxyproline assay (Fig.4). 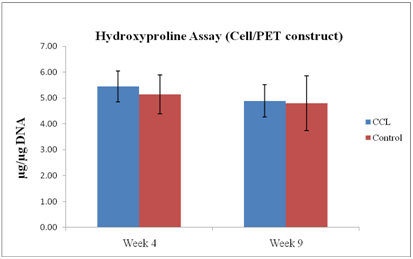 Mechanical property (modulus) of the constructs at 9 weeks was 1.7 times greater in the CCL group than the control ( p<0.05, Fig.5). 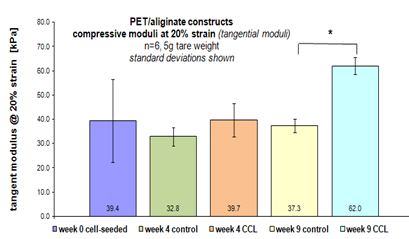 Constructs formed from bioabsorbable agarose (2) showed good cell growth. Confocal microscopy revealed cell viability of 91% and 88% at 4 weeks and 8 weeks respectively. Some integration between the constructs and surrounding cartilage was observed at 4 weeks after CCL application although the boundary between the two components was clearly seen (Fig.6).

Histological analysis confirmed only partial integration between constructs and adjacent cartilage for both groups, though some of the CCL samples had better integration compared to the controls (Fig.9). 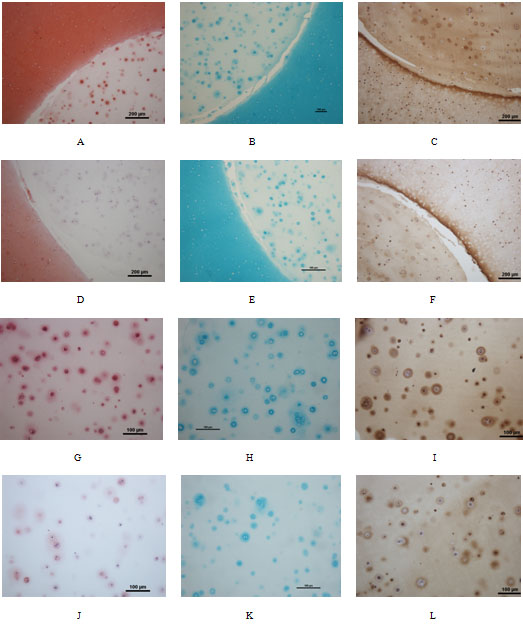 Histochemical staining indicated that chondrocytes had maintained their phenotype during the 8 week period of the experiment. However, the overall level of GAG within constructs was low, with positive GAG staining mainly pericellular with less stain in the extracellular matrix. Histology also showed relatively higher levels of GAGs after CCL compared with controls. Immunohistochemical staining for type II collagen (Fig.9) also suggested slightly elevated matrix levels in the CCL group. There were no significant differences in the mechanical properties between the test and control constructs.

Conclusions and Relevance for 3R
The ultimate aim of this study was to develop an in vitro approach to screening various materials and constructs used in tissue engineering leading to the reduction in the number of animals used in pre-clinical trials of different implants and methods proposed for cartilage repair. We used a 3-D co-culture model, comprising a cartilage disc in the form of a ring, into which are placed different types of constructs intended for cartilage repair. These rings were then subjected to compressive cycling loading in sterile culture medium to investigate the effect of mechanical stimulus on the quality of repair tissue. The cyclic loading was applied in a bespoke bioreactor over a period of 9 weeks. Two types of constructs were tested.
Our data demonstrated that the quality of repair tissue was improved after CCL in terms of amount of tissue formed, biochemical and histological maturation, and the maintenance of cell phenotype. Differences in mechanical properties related to the two scaffolds used were also discerned; mechanical stimulus had a positive effect when PET scaffolds were used, improving construct mechanical properties but not when agarose gel scaffolds were employed.
These results indicate that our model has been successfully developed and it now available for future use as an effective tool to screen constructs that are made from different biomaterials and intended for cartilage repair. The screening of more promising constructs and materials at an early stage would reduce the number proceeding to further investigation in animal models and in turn would result in a substantial reduction of animals used in pre-clinical trials. 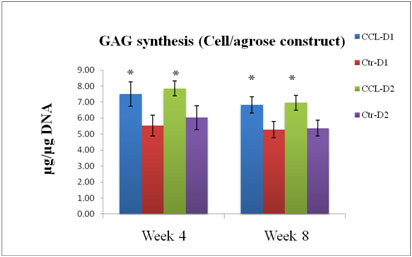 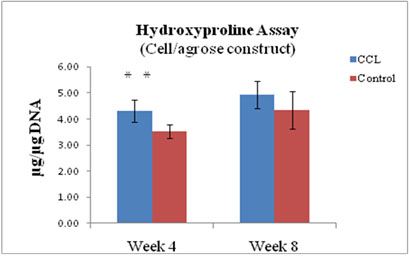