Background and Aim
The widespread use of in vitro systems for biological research and industrial applications has greatly reduced the experimentation on living animals. However, most of the cell culture systems currently in use require fetal animal serum (typically 10% v/v fetal bovine serum) as media supplement, in conflict with the principles of the 3Rs. In the past 30 years, most of the components essential for cultured cells and tissues have been identified, including nutrients, vitamins, trace elements, hormones, and growth factors1-4. However, the nature of the indispensable component(s) contained in animal sera remained elusive. Recent findings suggested the involvement of serum lipoproteins. Therefore, it was our aim to isolate the lipoprotein fractions from serum and to examine their efficacy of replacing serum in cell culture media.

Method and Results
Lipoprotein (LP) fractions were isolated by density centrifugation from sera of different origin, and evaluated for possible stimulatory effects on cellular growth and maturation using serum-free aggregating brain cell cultures5-8 as the test system. The conventional LP tractions (VLDL/IDL, LDL, HDL) were prepared from (i) fetal bovine serum (FBS, GIBCO/Invitrogen, ref 10099-141, lot 6792117Y), (ii) newborn bovine serum (NBS, GIBCO/Invitrogen ref 16010-159, lot 6330496D), and (iii) human plasma (prepared at the CHUV from my own blood). Each liquid was first cooled in ice, then mixed with concentrated solutions of benzamidine hydrochloride (1 M; final concentration 1 mM) and PMSF (0.2 M; final concentration 1 mM), and the exact amount of solid NaBr required to give the lowest density (d = 0.019). Stepwise density gradient centrifugation each time for 20 h at 40'000 rpm with a Ti 40 swing-out rotor). After each centrifugation step, isolation of the respective lipoprotein fraction (aspiration of the yellowish supernatant using a 1-mL syringe) and addition of solid NaBr to give the next higher density. Thus, the fractions of VLDL/IDL (density 1.019), LDL (density 1.063), and HDL (density 1.21), as well as the remaining lipoprotein (LP)-free serum were isolated. Each of these fractions was dialyzed in Slyde-A-Lyser casets (Pierce, MWCO 10'000) against 2 L of NaCl (170 mM) solution containing EDTA (0.1 mM) and HEPES (0.5 mM), pH 7.3, and then tested in serum-free aggregating brain cell cultures for their possible beneficial effects, in comparison with untreated cultures and with cultures treated in parallel with either FBS or NBS. The dialyzed LP-free serum fraction was heat denaturized (as were also FBS and NBS). A dialyzed sample of heat denaturized FBS was also taken for comparisons. The criteria used to judge maturation-enhancing effects were the activities of cell type-specific enzymes, i.e., of 2',3'-cyclic nucleotide 3'-phosphohydrolase (CNPase, oligodendrocyte-specific); glutamine synthetase (GS, astrocyte-specific) as well as choline acetyltransferase (ChAT) and glutamate decarboxylase (GAD), both neuron-specific. The test fractions were tested in aggregating brain cell cultures, usually during the first 3 weeks in vitro. They were added after each medium replenishment, i.e., at days in vitro DIV 8, 11, 14, 16, 18, 20). Then the cultures were harvested at DIV 21. For each test point, quadruplicates of aggregating brain cell culture replica were taken.
In a first series of experiments, the effects of FBS and NBS were compared in aggregate cultures during early (DIV 7-21) and late (DIV 20-32) cellular maturation. The results showed (Table 1 and Table 2) that the two serum fractions had similar stimulatory effects on neuronal and glial maturation. During the early developmental period, both FBS and NBS stimulated neuronal as well as glial maturation. Interestingly, the commercially available LP-deficient FBS also stimulated glial maturation (oligodendrocyte maturation more than astrocyte maturation), but not neuronal maturation. In contrast, a commercial lipid preparation containing cholesterol and fatty acids was not stimulatory but rather detrimental to the cellular maturation (Table 1). During the late developmental period (Table 2), FBS still increased the activities of GS and ChAT but not of CNP nor GAD. NBS also stimulated GS and ChAT, although to a somewhat lower extent.
Further experiments were conducted to examine the effects of the lipoprotein fractions isolated from FBS and NBS. Typical results from these experiments are presented in Table 3 concerning lipoprotein fractions isolated from FBS. Clearly, no stimulatory effect was obtained by the addition of any of the three lipoprotein preparations. The fact that most of the stimulatory activity was recovered in the lipoprotein-deficient serum fraction is in accord with the conclusion that the stimulatory activity of serum was not reproduced by lipoproteins. However, the finding that dialyzed serum was almost as active as non-dialyzed serum supported the view that the activity was due to macromolecular serum component(s) rather than low molecular weight factors such as hormones, growth factors, or nutritional additives. Experiments conducted with lipoprotein fractions prepared from human blood plasma produced similar negative results (Table 4), and again negative results were obtained from experiments in which lipoprotein fractions from NBS were directly compared with those from human blood plasma (data not shown). In the latter experiments, different lipoprotein media concentrations were taken, up to the 3-fold concentration used in previous experiments. An analogous test series was conducted with human lipoprotein fractions obtained from the group of Dr. A. Abderrahmani (DBCM, University of Lausanne), who prepares and uses routinely human lipoproteins for his actual research, and who provided us initially also with the detailed protocol for the preparation of lipoproteins by density centrifugation. The results from the testing of their lipoprotein fractions were negative as well (data not shown). In view of the finding that dialyzed serum retained much of the stimulatory activity, we finally tested additional blood proteins suspected to possess some of the wanted biological activity (based on either reports in the literature or on their relatively high plasma concentrations) such as fibronectin (0.5-5.0 µg/ml, Sigma no F4759), alpha1-antitrypsin (5-80 µg/ml, Sigma no A9024), fibrinogen (1-4 mg/ml, Sigma no F8630), and tissue-type plasminogen activator (Actilyse, 20-100 nM, Boehringer Ingelheim). In these experiments we used as endpoint only the CNP activity, which was specific for the stimulation in early cultures, and which was also completely recovered in dialyzed serum and in LP-deficient serum. However, the testing of these commercially available blood plasma proteins again produced only negative results (data not shown).

Conclusions and Relevance for 3R
The results obtained clearly show that lipoproteins alone are not able to replace the known beneficial effects of bovine serum in cell culture. This conclusion is based on experiments with aggregating brain cell cultures. Since this culture system contains different types of cells (stem cells, neurons, astrocytes, oligodendrocytes, microglia) and progressively runs through a sequence of histotypic stages of maturation (including glial cell maturation, segregation of "adult" stem cells, neurite formation, synaptogenesis, myelination), it appears to be the most versatile cell culture system to detect factors able to substitute bovine serum. Although the results are clearly negative concerning the lipoproteins as possible substitutes of bovine serum, one positive finding is that NBS was almost as stimulatory as FBS, and could therefore be used instead of the fetal serum (at least in the present culture system). The present data also indicate that the beneficial effects of serum reside in a macromolecular fraction that could be isolated and identified with great likelihood. Such an effort would certainly be worthwhile, because it would most probably be possible to obtain this component ultimately by animal-free synthetic means, such as proteins by recombinant technologies. 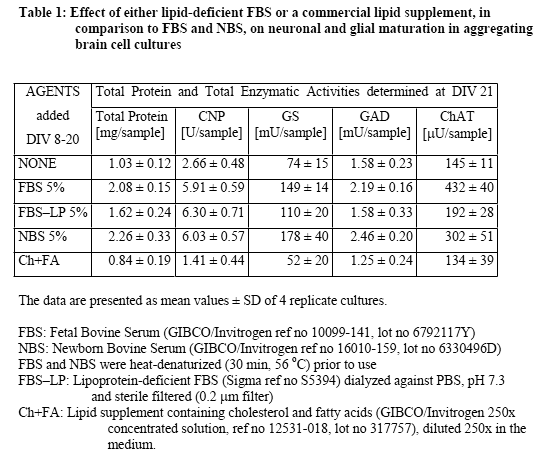 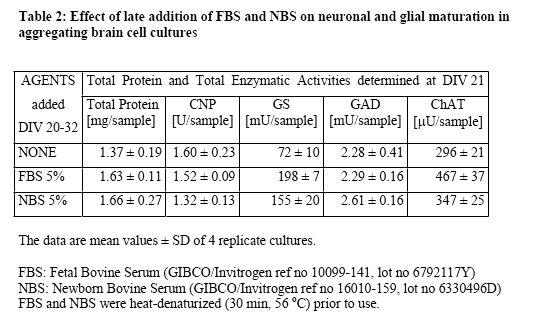 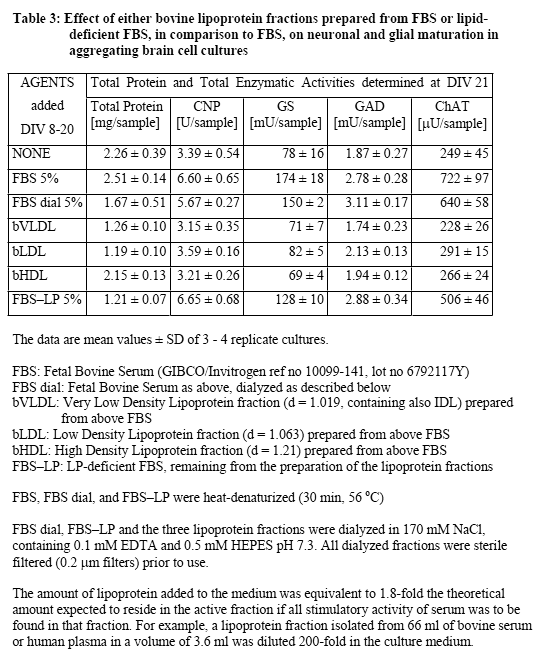 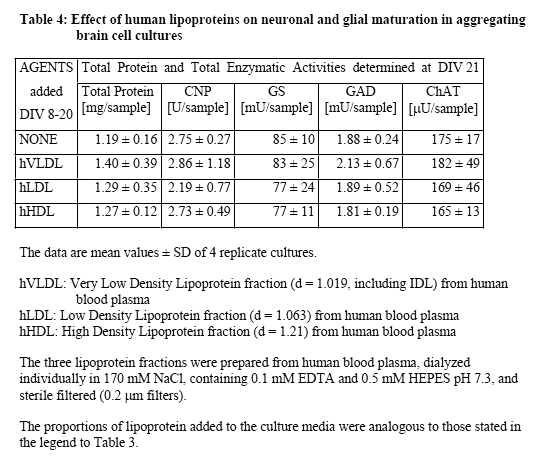