Bioaccumulation is generally referred to as a process whereby the concentration of a chemical in an organism attains a level exceeding that in either the respiratory medium (in the case of fish: water), the diet, or both (Arnot and Gobas 2006). The bioaccumulation process embraces the absorption, the distribution, the metabolism and the excretion (ADME) of the substance. The bioaccumulation of a chemical is the result of its uptake via all routes of exposure, whereas the bioconcentration of a chemical is a consequence of the organism’s exposure to it in the external aqueous medium, not of its uptake in the diet (Arnot and Gobas 2003). The extent to which a chemical bioaccumulates is expressed in such terms as the Bioconcentration Factor (BCF) - which is the ratio between the steady state chemical concentration in the organism and the chemical concentration in the respiratory medium - or the Bioaccumulation Factor (BAF), which takes into account also the concentration of the chemical in the food. In a regulatory context, it is usually the BCF that is implemented to identify bioaccumulative substances in fish. The standard procedure that is adopted for determining the BCF-values of chemicals in fish is an in-vivo test, which is conducted in accordance with the Guideline 305 of the OECD (Organisation for Economic Co-operation and Development). For the performance of one test alone, as many as 108 fish have to be sacrificed.

With the worldwide implementation of new chemical stipulations, the extent of bioconcentration testing for regulatory purposes will undergo a dramatic increase. In Europe, for instance, REACH requires an estimation of the bioconcentration potential in fish of chemicals with a log Kow-value ≥ 2.7 that are produced in weights exceeding100 tons per year. The implication of this new regulation is that the BCF-values of an estimated 3`000 to 5`000 substances might have to be determined, which will entail a massive increase in the number of fish that must be sacrificed for testing purposes. Hence, there is a need to develop alternative approaches to the testing of bioaccumulation in vivo.

In recent years, various non-animal-based strategies for the assessment of bioaccumulation have been discussed. A critical issue in the implementation of such non-animal-based predictions of bioaccumulation is the incorporation of information relating to chemical biotransformation (de Wolf et al. 2007, Nichols et al. 2007, Weisbrod et al. 2009). In principle, this information can be procured using either in-silico models, in-chemico assays, or metabolically-competent in-vitro systems of, for example, hepatic S9-fractions, isolated hepatocytes or microsomes. The aim of this project was to evaluate the potential of an in-vitro assay involving piscine hepatocytes to furnish data on chemical biotransformation rates.

Hepatocytes were isolated from the livers of rainbow trout using a two-step-perfusion technique. Fresh suspensions of the isolated cells were dosed with the test chemical and then incubated for 2 hours at physiological temperature (12-16°C). Samples were withdrawn from the incubation medium at regular intervals and processed for chemical analysis. The rate at which the test compound disappeared from the incubation medium yielded the intrinsic clearance rate (ml/h/106 cells) (Figure 1). Physiologically-based prediction models were implemented to derive the metabolic rate (km) of the test-chemical in the intact fish from its intrinsic clearance rate in the isolated piscine hepatocytes (Cowan-Ellsberry et al. 2007). This value was used to calculate either the BCF or the BAF. 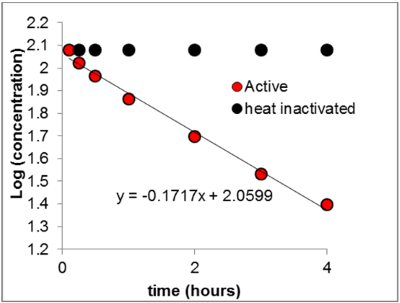 Figure 1: Determination of intrinsic clearance: The assay measures the temporal course of substrate depletion. The slope of the log-transformed substrate-depletion curve is used to calculate the elimination-rate constant (ke). An estimate of the intrinsic-clearance rate [Clint,  (ml/h/106 cells)] is obtained when the elimination-rate constant is divided by the concentration of cells.

The project was successful in establishing a protocol of good intra-laboratory reproducibility for measuring the intrinsic hepatic clearance of lipophilic xenobiotics in freshly-isolated hepatocytes of the rainbow trout (Oncorhynchus mykiss). Seasonal fluctuations in the metabolic activity of trout have been identified as a major source of variability in the in-vitro assay. To overcome this limitation, existing methods for the cryopreservation of trout hepatocytes (Mingoia et al. 2011) have been adapted and further developed.

The project tested two extrapolation models for the prediction of the in-vivo metabolic rates of xenobiotics from the intrinsic clearance rates that were measured in the in-vitro hepatocyte assay. The models work well but would gain from an improved knowledge of physiological scaling factors.

Metabolic-rate values and BCF-predictions for three chemicals were generated and compared to in-vivo estimates. The in-vitro hepatocyte assay predicted well the in-vivo BCF-values, and, importantly, correctly classified the test-substances as “non-bioaccumulative compounds”. Although these findings confirmed the utility of the hepatocyte assay, the existing database is too small to support the drawing of general conclusions.

When aiming to reduce or replace in-vivo tests by in-vitro ones, the reproducibility of the latter has to be demonstrated. To test the intra- and inter-laboratory reproducibility of the hepatocyte assay, we participated in an international ring study, in which three laboratories determined the in-vitro intrinsic clearance rates of five reference compounds. The intra-laboratory variability (% coefficient of variance, CV) of the clearance rates for these five compounds ranged from 4.1 to 30%, whilst the inter-laboratory variability ranged from 27 to 61% (Fay et al. 2014).  The inter-laboratory variability for the predicted bioconcentration factors, which were based on the in-vitro clearance values, ranged from 5.3 to 38 %. The results indicate that the in-vitro hepatocyte assay can be reliably used as part of a weight-of-evidence-based assessment of the bioaccumulation potential of xenobiotics.

This project furnished proof-of-principle data that the piscine hepatocyte assay can contribute the information appertaining to biotransformation rate that is required for a non-animal-based bioaccumulation-testing strategy. The availability of such a strategy will be of paramount importance in helping to reduce in-vivo testing in fish, which, in view of the new chemical regulations that will be imposed worldwide, and which will call for BCF-information appertaining to thousands of chemicals, would otherwise increase explosively. The next step in the implementation of the hepatocyte assay in the regulatory praxis will be a formal OECD validation study involving large-scale, international-ring tests. This activity is being currently organized.