Bacterial meningitis remains a devastating disease with high morbidity and mortality. Despite advances in treatment and care, the in-patient rate of mortality through bacterial meningitis is approx. 25% and, as a consequence of brain damage, clinically relevant neurological sequelae emerge in up to 50% of survivors. How infection leads to brain injury remains largely unexplained, but converging evidence suggests that the clinical outcome of bacterial meningitis is determined by the host’s response to the infectious agent in the brain.
Owing to the multi-factorial pathogenesis of meningitis involving the interplay between the susceptible brain cell type, the bacterial pathogen and the host’s inflammatory reaction, including potential therapeutic approaches supporting brain repair functions, the majority of the current research on meningitis is carried out in vivo. The degree of suffering according to the Swiss Federal Veterinary Office is considered intermediate to severe (e.g. categories 2-3) for many of these studies. In terms of animal use and welfare it would be highly desirable to replace part of this research by in vitro studies. We established in vitro models that reproduced important patho-physiological processes of damage and tissue regeneration in infectious diseases of the brain.
Brain injury caused by bacterial meningitis most frequently affects the cortex and the hippocampus (HC)[1, 2]. Cortical damage is associated with areas of focal ischemic necrosis. Hippocampal injury is documented in over 75% of patients who die from the disease and in corresponding animal models. This form of injury is characterized by apoptotic cell death of immature neurons, e.g. neuronal stem cells and/or their progeny in the dentate gyrus, often resulting in long lasting learning deficit. Hippocampal injury is limited to the dentate gyrus, a site of continuous formation of new neurons and therefore potentially well equipped for brain repair[3]. However, since the neurofunctional sequelae persist for decades after meningitis, the hippocampal repair potential seems to be ineffective or insufficient to compensate for the brain damage.
A potentially attractive treatment option for the support and/or reconstitution of neurogenesis after damage to the stem cell niche is the delivery of regenerative cells to the site of cell loss. Different sources of stem cells are currently being explored for potential use in repairing the brain. Importantly, these explorative studies aimed at assessing the potential of different stem cell populations are generally carried out by performing in vivo studies. A large proportion of the cell types evaluated are not suitable for transplantation. Based on this and as part of the 3R-funded project, an in vitro screening method was developed for identifying stem cells that can be used for regenerative therapy [4]. The results produced the scientific basis and methodological confidence for us and other groups working in this field to reduce and replace a substantial proportion of explorative animal studies [5].
We formulated the following aims for the project:
AIM 1: To reduce and replace studies in animals we developed an in vitro system for studying neuronal brain damage due to bacterial infection. HC-derived neuronal stem/progenitor cells were differentiated into defined developmental stages e.g. stem cells, immature neurons and mature neurons, and then challenged with different stimuli characteristic for bacterial meningitis, i.e. growth factor deprivation, TNF-α or bacterial components, to assess which developmental stage is most susceptible to bacterial meningitis.
AIM 2: To reduce and replace studies in animals we established a pre-screening system of organotypic hippocampal slice cultures (OHCs) challenged with live Streptococcus pneumoniae to evaluate different stem/progenitor cells for their repair potential in the injured HC and validated the in vitro findings in a consecutive in vivo project.

AIM 1
Method: The hippocampal-derived stem/progenitor cells were driven into neuronal differentiation during 21 days. After being challenged with the different stimuli, cell death was assayed by cleaved caspase-3, Annexin-V or apoptosis-inducing factor. The in vitro findings were validated in vivoin an infant rat model of pneumococcal meningitis. The capacity of hippocampal-derived cells to multiply and form neurospheres was compared between infant rats that survived pneumococcal meningitis and their uninfected litter-mates. 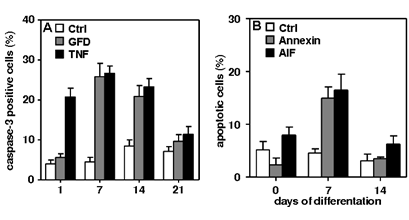 Figure 1: (A) Growth factor deprivation (GFD) and TNF induce caspase-3-dependent apoptosis. TNF-induced apoptosis early, at 1-14 d after differentiation. Apoptosis induced by GFD was most prominent at 7 and 14 d (p < 0.05).
(B)Bacterial components (BC) induce caspase-3-independent apoptosis. Hippocampal cells were exposed to BC for 2 h. Cell death induced by BC was compared to control cells using Annexin-V or apoptosis inducing factor (AIF) staining. Apoptosis induced by BC was most abundant 7 d after differentiation (p < 0.05). Overall, the likelihood of cell death after both challenges peaked at 7 d. P values were calculated by one-way ANOVA followed by Turkey’s multiple comparison post hoc test. Data are presented as mean ± SEM of ≥ 3 independent experiments.


Cell death induced by bacterial components was characterized by the binding of Annexin-V and the re-localization of nuclear apoptosis-inducing factor. Immunocytochemical analysis revealed that immature neurons and stem/progenitor cells were most susceptible to apoptosis after the defined challenges (Fig. 2). 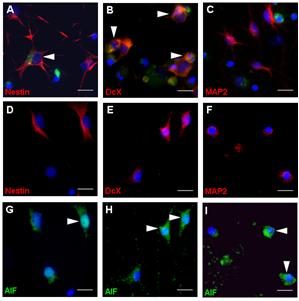 Figure 2: (A-C) TNF and growth factor deprivation (GFD) induced apoptosis in cells that stained positive for DcX and Nestin but not for MAP2. (D-I)After exposure to BC, AIF co-localized in mature neurons (MAP2; F and I), immature neurons (DcX; E and H) and stem/progenitor cells (Nestin; D and H). Scale bar, 50 µm.


In the in vivo system, significantly fewer colonies (formed by stem/progenitor cells) were obtained from the hippocampi of infected animals (Fig. 3), which is in line with the in vitro findings. 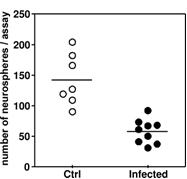 Figure 3: In an infant rat model of pneumococcal meningitis the ability of hippocampal cells from infected animals to form colonies was significantly reduced (p < 0.05), compared with that of cells isolated from hippocampi from mock-infected controls.


In summary, the in vitro model of differentiating hippocampal cells led to the observation that challenges characteristic for bacterial meningitis caused significantly more apoptosis in stem/progenitor cells and immature neurons compared with in mature neurons, a finding that may explain the persistence of neurofunctional deficit after bacterial meningitis.
The availability of this in vitro system allowed for a substantial reduction in the number of animals used, since it offered the possibility of screening pathogenic mechanisms and stimuli for their relevance prior to conducting large-scale studies in vivo[6].

AIM2:
Method: Green fluorescence protein (GFP)-expressing stem/progenitor cells from the fetal HC and ganglionic eminences (GE) were grafted into the DG of organotypic hippocampal slice cultures (OHCs) injured by challenge with live Streptococcus pneumoniaetogether with antibiotics to induce the release of bacterial components by killing and lysis of bacteria. The migration and differentiation of grafted cells were examined on cryosections of the OHCs using immunofluorescence and histomorphometry. Subsequently, hippocampal NPCs were evaluated in an infant rat model of pneumococcal meningitis. Application was done by stereotaxical transplantation of NPCs into the intact and injured hippocampal hilus region of the dentate gyrus within the OHCs. Survival and integration were monitored by immunofluorescence and histomorphometry at 3 defined points in time, i.e. 1, 2 and 4 weeks after transplantation [6, 7].

Results: In intact slices seven days after grafting, histomorphologic analysis revealed the migration of stem/progenitor cells from the site of injection into the molecular layer of the dentate gyrus, while in slices injured by challenge with live Streptococcus pneumoniae together with antibiotics the grafted cells migrated into the injured granular layer of the dentate gyrus (Fig. 4A/B) and differentiated into neurons (Fig. 4A/B insert).

Figure 4: (A) In intact slices, hippocampal GFP-expressing stem and progenitor cells grafted into the hilus region of the HC migrated into the molecular layer of the dentate gyrus, while in pneumococci-injured slices grafted cells were found at the site of brain damage in the granular layer of the dentate gyrus. (B) Grafted stem and progenitor cells from the HC were characterized by a neuron-like morphological phenotype and expressed the neuronal microtubule-associated protein 2 (MAP2, insert). (C/D) In the infant rat model of pneumococcal meningitis, GFP-expressing NPCs migrated from the transplantation site to the site of damage in the granular layer of the dentate gyrus. Two weeks after transplantation (n = 3), the survivingcells differentiated into Doublecortin (DcX)-positive immature neurons (C). After 4 weeks (n = 4), grafted cells differentiated into neurons (TUJ1, D). Scale bar A/B/C/D: 100µm.

In rats one week after cured bacterial meningitis, neuronal stem/progenitor cells from GFP-expressing rats grafted into the hilus region of the dentate gyrus migrated from the injection site to the injured granular layer of the hippocampal dentate gyrus (Fig. 4C/D). Migrated cells expressed markers of neuronal differentiation at 2 and 4 weeks after transplantation. Hippocampal injury induced by bacterial meningitis thus guides transplanted stem and progenitor cells to the site of brain damage. The availability of the OHC in vitro system leads to a substantial reduction in the number of animals used, since only approaches that prove successful in the in vitro system are considered for further evaluation in vivo [5-6].

The experimental in vitro systems allow the following in vivo investigations to be reduced or replaced:
i) Testing of a pathogenic hypothesis by in vitro screening of potential bacteria-derived mediators (e.g. bacterial cell wall components) and potential host factors (e.g. host inflammatory mediators).
ii) Assessment of the intrinsic properties of the different stages of cell differentiation, which contribute to their selective vulnerability.
iii) Evaluation of therapeutic approaches that can counteract the selective vulnerability investigated under ii)
iv) Evaluation of therapeutic approaches that involve grafting stem/progenitor cells into brain tissue.
With the in vitro models we developed, studies for screening for pathogenic factors and therapeutic feasibility studies in animals can be substantially replaced by in vitro systems.
v) This model was successfully adapted to other pathologies also affecting the hippocampus. We recently used the model to develop an in vitro surrogate for the in vivo rat model of cardiac arrest/resuscitation that produces damage to the cornus ammoni 1 (CA1) region of the hippocampus. By submitting the organotypic slice cultures to oxygen/glucose deprivation we were able to induce the characteristic damage as observed in patients and animal models of cardiac arrest and resuscitation. Currently we are evaluating the model for regenerative therapy by neuronal progenitor cells (NPCs) grafting as an alternative to in vivo transplantation studies [7]