Background and Aim
Multiple sclerosis (MS) is a chronic demyelinating disease of the central nervous system (CNS) affecting about one out of 700 adults in Europe. Histological data and results from animal experiments indicate that T cells, B cells, macrophages and antibodies contribute to the formation of immune-mediated lesions in the brain and spinal cord of MS patients. The presence of clonally expanded immunoglobulins in the cerebrospinal fluid (CSF) of MS patients is one of the most prominent hallmarks of the disease. However, neither the specificity of these immunoglobulins nor the triggers causing demyelination and axonal damage are known.

A large proportion of current MS research is currently performed in a model system called experimental autoimmune encephalomyelitis (EAE). For the induction of EAE, rodents or nonhuman primates are actively immunized with myelin antigens, thereby inducing an inflammation of the CNS. This inflammation leads to a progressive paralysis of the animals before they eventually are sacrificed. While CNS inflammation can also be induced by adoptively transferring MOG-reactive T-cells alone, antibodies are additionally required for the induction of demyelination in rats and nonhuman primates. Likewise, deposits of immunoglobulins and complement can be detected in MS lesions, supporting the role of antibodies in MS pathogenesis.

Although EAE has provided many valuable insights into the pathology of MS, it only partially reflects MS and it is difficult to discern the role of different arms of the immune system with respect to the induction of CNS damage. Special attention is currently being paid to mechanisms inducing axonal damage, which is thought to be the morphological correlate of permanent neurological impairment. Using organotypic CNS slice cultures, we have therefore established an experimental model system, in which the complex architecture of the CNS is maintained and which allows the detailed investigation of interactions between the CNS and components of the immune system, as well as mechanisms of CNS damage and repair.

In order to investigate antibody-mediated CNS tissue damage, we used an antibody specific for a myelin antigen (MOG, myelin oligodendrocyte glycoprotein) in the presence of complement (figure 1A, figure 2A). Addition of the antibody alone or of an isotype antibody with or without complement did not induce morphological changes (figure 2C). Time-lapse imaging showed that demyelination starts already after 4 hours of antibody/complement addition and is completed within 24 – 48h (figure 1A 43h). Interestingly, in spite of complete demyelination, axons remained intact (figure 2A’). After removal of the detrimental factors antibody/complement (figure 1A 43h), marked remyelination was observable (figure 1A 53h – 77h). We concluded that antibody-mediated demyelination alone is insufficient to induce axonal damage (Harrer et al., 2009).

Next, we investigated the effects of myelin-directed T cells. We demonstrated that an inflammatory CNS environment mimicked by IFNg can enable oligodendrocytes (ODCs) to process and present endogenous antigen via MHC class I molecules (figure 3). Consequently, autoaggressive, cytotoxic CD8+ T cells targeting myelinated structures strongly invaded organotypic brain clices and directly transsected myelinated axons (figure 4). As a result, they not only caused patchy myelin dissintegration but alos widespread axonal loss due to “collateral bystander damage” (figure 5). Although the outlined scenario is most likely not the only relevant mechanism of CNS tissue damage in inflammatory CNS diseases, we are confident that our findings critically contribute to the understanding of CD8-mediated neuropathology in CNS inflammation, strengthen a pathogenic role of CD8+ T cells in MS, and advocate for the development of future immunotherapies aiming at the CD8-myelin/ODC interface (Sobottka et al., 2009).

Conclusions and Relevance for 3R
Reduce:
Using slice cultures of hippocampus and cerebellum, several experimental conditions can be tested with tissue obtained from a single mouse. In contrast, for the induction of EAE, several mice have to be included per experimental group. Using transgenic mice expressing GFP in myelin, experiments can be investigated by (confocal) live imaging.

Replace:
Organotypic slice cultures present an alternative tool to study the interactions between the CNS and specific components of the immune system. Therefore, many questions, which are now investigated in the animal model of MS, can alternatively be studied using this in-vitro system, thus replacing many in-vivo experiments.

Figure 2
Remyelination is guided by morphologically intact axons. OSC were treated with anti-MOG antibody and complement (A, B) or with an isotype control antibody plus complement (C, D). After an incubation period of 48 h, OSC were either fixed (A, C) or further incubated for 10 days in fresh culture medium (B, D). Strongly demyelinated OSC (A) spontaneously remyelinated (B) at sites, where axons had remained morphologically intact (B"). The morphology of control OSC treated with an isotype control antibody and complement was not visibly damaged (C, D). Staining for MBP is shown in red, for Neurofilament200 (NF) in green. Scale bar, 50 uM (from Harrer et al., 2009).

Figure 3
Incubation with IFNg induces MHC class I and II expression. Confocal images of costained MHC class I and II molecules (red) and NF (cyan) reveal only marginal MHC expression in untreated ODC-OVA x PLP-GFP brain slices (A). Yet, presence of IFNg (100 U/ml, 72 hours) induces MHC expression (B and C). Whereas MHC class II was most likely observed on microglia (B), MHC class I was mainly detected on oligodendrocytes (C). The lower panels in C reflect the boxed area in the upper merged panel. Scale bars equal 20 um in A, B, and upper panel in C and 7.5 um for lower panel in C (from Sobottka et al. 2009).

Figure 4
Direct transsection of myelinated axons by CD8+ OT-I T cells. Frames from confocal time-lapse sequences were captured and document only little invasion of nonactivated (A) or control peptide (B) prestimulated CD8+ OT-I T cells (red) into ODC-OVA x PLP-GFP brain slices. Myelin damage was not observed in either situation (A and B). Contrarily, SIINFEKL prestimulated CD8+ OT-I T cells entered brain slices to a great extent (C) and directly attacked myelin (green) as pointed out by arrows (subregion of C). Additionally, pronounced blebbing of oligodendrocytes after T cell attack was observed as pointed out by arrowheads (D). In the upper left corner, time elapsed after start of sequence is documented, scale bars equal 30 um in A, B, and C and 10 um for subregion of C and in D (from Sobottka et al. 2009). 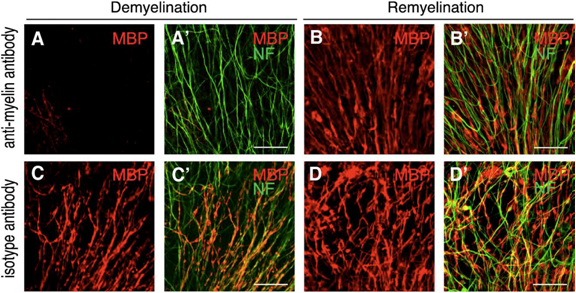 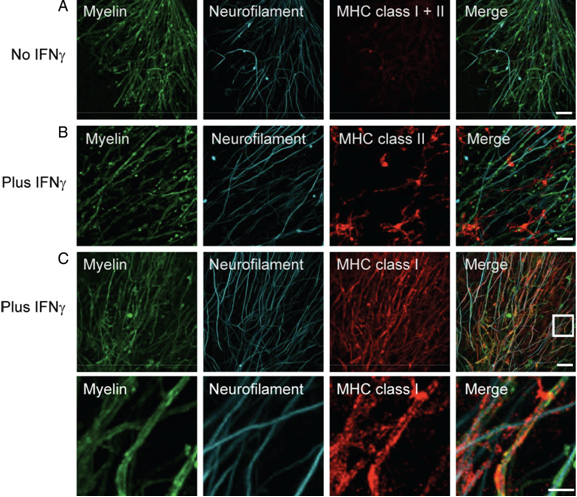 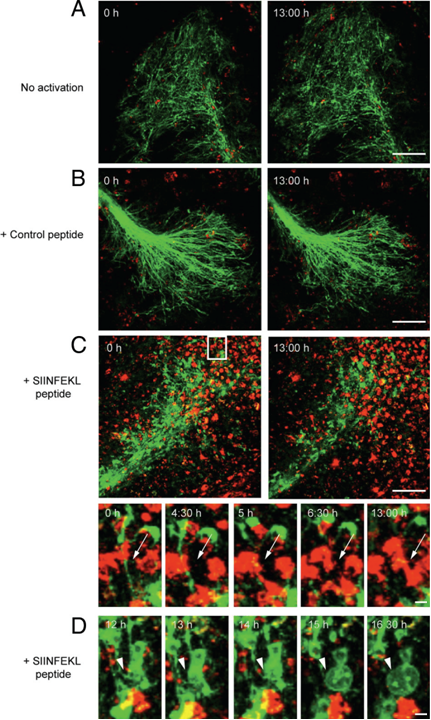 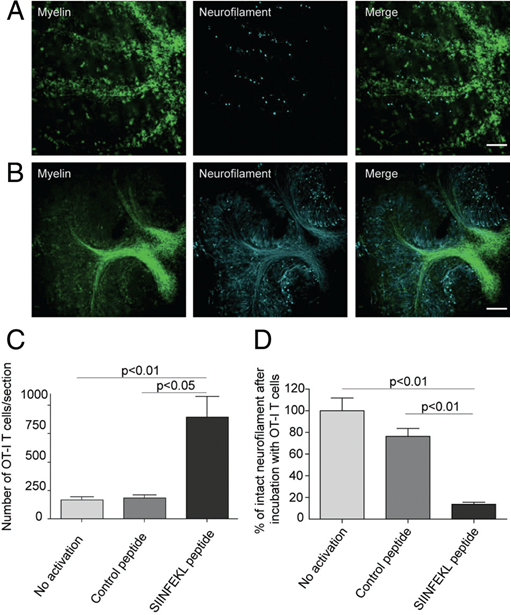