From pigs to cells: Virulence of classical swine fever virus is predictable in cell cultures

Classical swine fever (CSF)[*] is a highly contagious disease in pigs caused by CSF virus (CSFV). Information on virulence of an emerging isolate is crucial for guiding appropriate surveillance programs. The routine determination of the virulence of new CSFV isolates presents an ethical problem due to the necessity for infecting pigs. In the present project, funded by the 3R Research Foundation (Project No. 105-06), a cell-based in vitro system was developed which predicts the degree of virulence for CSFV isolates.

Replication of RNA viruses is error-prone due to the lack of proof-reading of the viral RNA replication machinery. This results in genetic diversity and virus strains with varying degrees of virulence. Furthermore, amplification of viruses in permanent cell lines rapidly selects for cell culture-adapted viruses, as exemplified by enhanced binding to heparan sulphate (HS) glycosaminoglycans present on almost all vertebrate cells. Such viruses show altered replication characteristics in vitro and lower virulence in vivo, when compared with the original virus isolated from animals. Consequently, the first aim of this project was to identify a cell culture that does not select for virus mutants binding to HS glycosaminoglycans.

By analysing several porcine primary cells and immortalized cell lines, we found that the porcine aortic endothelial cell line PEDSV.15 (Seebach J. D. et al., 2001) is suitable for the propagation of CSFV without altering the HS-binding properties of the virus (Eymann-Häni R. et al., submitted). With these cells, we amplified 17 prototype CSFV strains and field isolates with known virulence. These viruses served for systematic in vitro analyses aimed at identifying parameters that relate to virulence in vivo.

Understanding the disease for identifying in vitro parameters.

Recent advances in understanding the interaction of CSFV with the host led to a model for the pathogenesis of CSF, in which a specific role for different cells of the immune system was postulated (McCullough K. C. et al., 2009). After transmission via the oronasal route through direct contact or feeding of contaminated swill, the virus is found in the tonsils and oropharyngeal lymph nodes. It is transported via the blood stream to primary and secondary lymphoid tissues including the bone marrow, thymus, spleen, various lymph nodes, and gut-associated lymphoid tissue. The first detectable targets for CSFV infection and replication are endothelial cells, monocytes, macrophages and dendritic cells (DC). Importantly, the virus inhibits interferon regulatory factor 3 (IRF3)-dependent IFN-α/β production in these cells, by the means of Npro protein (Ruggli N. et al., 2005; Bauhofer O. et al., 2007). This leads to efficient replication, spread and rapid viremia. During viremia, the virus also infects plasmacytoid DC (pDC), also called natural interferon producing cells (NIPC). IFN-α production in these cells is IRF7-dependent, which is not impaired by Npro. Infection of pDC/NIPC leads to production of large quantities of IFN-α and pro-inflammatory cytokines. This cytokine storm is particularly strong with highly virulent strains, and leads to leukopenia and haemorrhagic immunopathology typical of CSF (Fig. 1) (Summerfield A. et al., 2006). Due to these characteristics, we focussed our attention on CSFV infection in endothelial cells, monocyte-derived macrophages, DC and pDC. 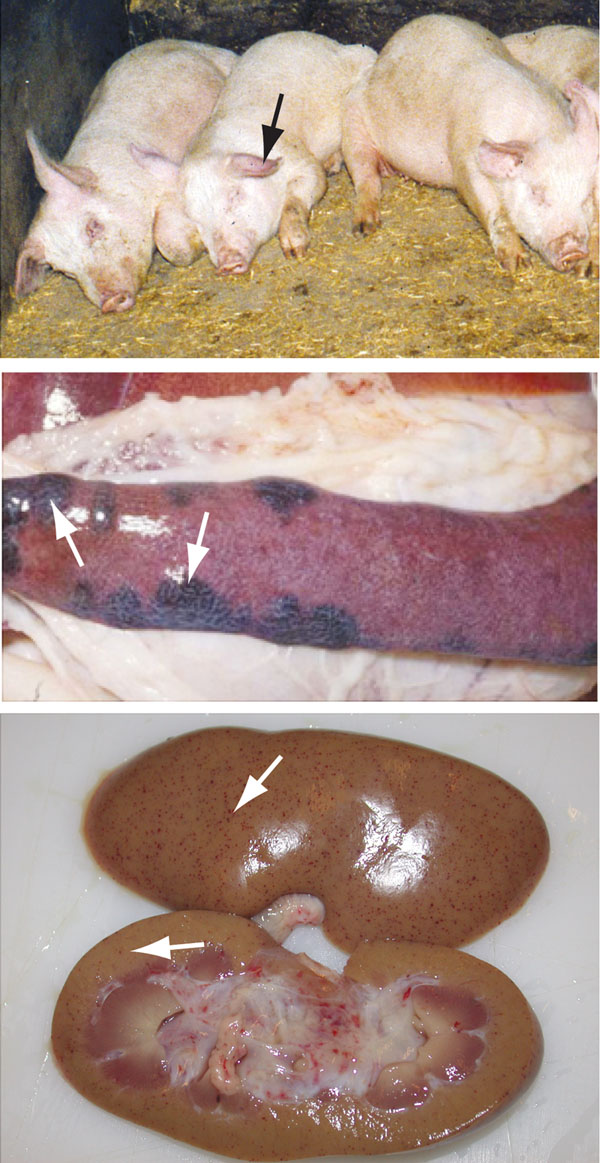 The study determined the following three parameters as correlates for virulence.

Size of viral foci:
Highly virulent CSFV strains are known to show a more rapid onset of viremia and yield higher virus load than low virulent strains. We hypothesized that this may be reflected in the efficiency of a particular strain to spread within a cell culture that does not select for HS-binding mutants. This was analysed in terms of virus focus formation following infection of PEDSV.15 cells under a semi-solid medium overlay. Infection with the 17 prototype CSFV strains did indeed reveal that highly virulent strains form significantly larger foci of infected cells than moderately virulent and avirulent strains (an example is shown in Fig. 2).

Fig. 2: Assessment of viral spread by a focus size assay. PEDSV.15 cells were infected with a highly virulent (HV), a moderately virulent (MV) and a low virulent (LV) CSFV and incubated under a semi-solid agarose/medium overlay. The foci of infected cells were visualized with immunoperoxidase-staining for the viral glycoprotein E2. 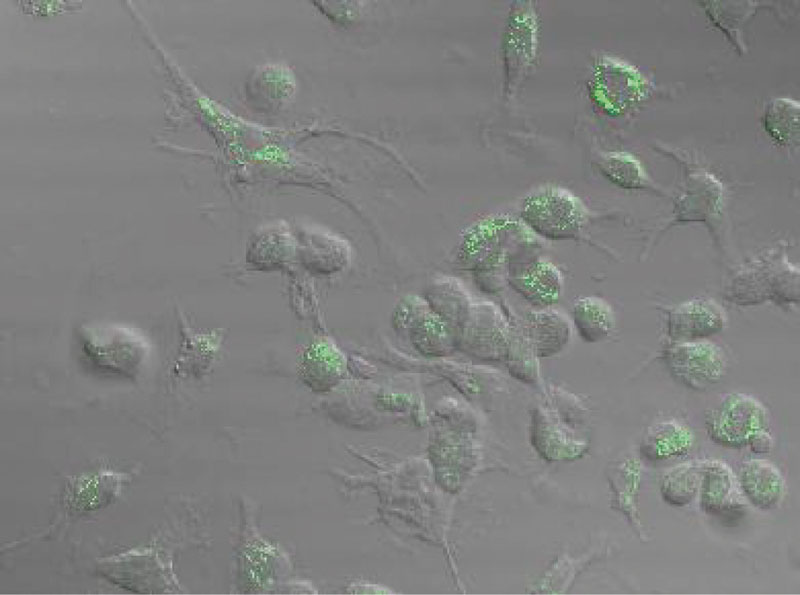 Fig. 3: Porcine macrophages and DC infected with CSFV. The cells were fixed and viral NS3 protein (green) was visualized by immunofluorescence-based microscopy.

IFN-α production in pDC:
During the acute phase of CSFV infection in pigs, we observed a correlation between the virulence of the strain and the level of circulating IFN-α (Summerfield A. et al., 2006). In vivo, the cells known to produce large quantities of IFN-α are porcine pDC (Summerfield A. and McCullough K. C., 2009). With the prototype CSFV used in this study, we observed that pDC produce more IFN-α upon infection with highly virulent than with less virulent strains.

The three parameters considered together

Stimuli for applications in diagnostics and fundamental research

Assessment of viral virulence through in vivo infection experiments is currently a routine procedure to study pathogenesis of a viral disease, and to monitor the virulence of emerging virus isolates. With moderately to highly virulent viruses, the burden for the animals is high. Although a full validation of our proposed in vitro system is required with a larger number of CSFV isolates, the system opens up new perspectives for the assessment of CSFV virulence without the systematic need for animal trials. Application in both diagnostic and research fields will considerably reduce the number of infection experiments with pigs. This system will also permit a controlled analysis of genetic determinants of virulence, and may prove applicable for other viruses

PDF version of this Bulletin No. 44