Fish, Acute Toxicity Test: The number of animals can be reduced

In the fish acute toxicity test (OECD Guideline 203)[*], animals experience a high level of pain when exposed to lethal concentrations of a test compound. Any measures for reducing the number of animals in the test without loss of information should be strived for. With this goal in mind and based on long standing observations, Dr. Hans Rufli from ecotoxsolutions, Basle, Switzerland, initiated the present project supported by the 3R Research Foundation (No. 114-08). After the analysis of historical data from two databases and a simulation procedure, an international expert group concluded that fish acute toxicity tests can be performed with fewer animals than indicated in the present OECD guideline.

It is not uncommon in routinely performed fish acute toxicity tests to find very steep dose-effect relationships in which only one concentration causes a partial mortality (mortalities >0% and <100%) or even none (Fig. 2c). Accordingly, little information is gained from the 4 other concentrations with no or complete mortality. Therefore, the question arose whether this observation can be substantiated by an analysis of historical data derived from a laboratory database from industry (chemicals, pesticides, dyes, plastics, pharmaceuticals etc.), and the database of the Office of Pesticide Programmes (OPP). Dr. T. Springer performed the analysis of the data and test simulations, assisted by the statisticians Drs. J. Green and P. Chapman, previously involved in the Avian Acute Toxicity Test, which evaluated new designs with fewer birds. The results were then discussed in a workshop, together with alternative ways of reducing fish in case range-finding studies are required. Attendees as listed in Table 1 represented experienced experts from academia, industry and governmental authorities.

Table 1: Expert panel at the workshop to reduce the number of fish in the acute toxicity test. 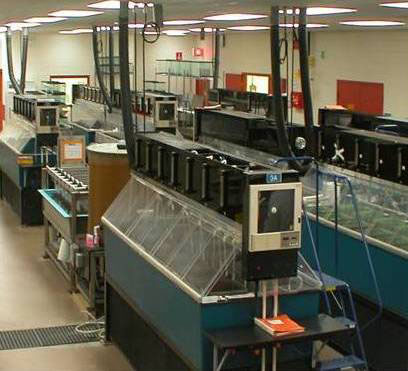 The approximate LC50 and slope of the test compound concentration-response curve is assessed in an initial concentration range-finding study. Subsequently, a definitive test is performed either as limit test (no toxicity in range-finding: LC50 >100 mg/L or >water solubility limit) or full test (toxicity in range-finder: LC50 = x mg/L). The estimated inclination of the slope derived from the concentration range study determines the spacing factor between concentrations in the full test. At least two partial mortalities are necessary to estimate the LC50 using Probit analysis and to obtain an estimate of the slope. As an example, a steep slope of 13 (Fig. 2a) and a spacing factors of 1.6 (OECD recommends ≤2.2) or a flat slope of 6.5 (Fig. 2b) and a spacing factor of 2.1 both would yield two partial mortalities. Increasing the factor beyond 1.6 with a steep slope of 13 (or beyond 2.1 for a flat slope of 6.5) would yield only one partial mortality and eventually none (Fig. 2c). Thus, increasing the spacing factor too much, most of the concentrations are wasted as they result in either 0 or 100% mortality.

The observation of generally steep slopes was confirmed for data derived from the industry laboratory (median slope of 13, comparable to Figs. 2a and c). In 75% out of 329 studies, carried out according to standardized OECD guidelines, no or one partial mortality was reported (Fig. 2c). This means that Probit analyses of the LC50 was possible only in 25% of the studies. Furthermore, in 75% of the studies, at least two concentrations with 0 or 100% could have been omitted as they do not contribute to the calculation of the LC50. Clearly, spacing factors chosen are often too high. Consequently, fish are wasted.

Not confirmed by the OPP database

The OPP database with 4010 acute fish studies of pesticides (active ingredients, metabolites and multi-ingredient formulations) and 469 reported slopes of “core” studies did not confirm the steep slopes as found in the industry laboratory data. The median slope of the dose-effect relationship of 6.5 represents a relatively flat slope (comparable to Fig. 2b). The reasons for the different slopes of the two databases (median of 13 versus 6.5) are not known, but might be explained by different type of chemicals representing different modes of action (e.g. receptor mediated).

Given the difference of the slopes of the two databases, it was not possible to propose a reduction of the number of concentrations. As a consequence, a Monte Carlo study (MC-simulation) was performed based on representative slopes and LC50-values of the historical data. Simulation offers a way to find an optimal experimental design without performing any additional in-vivo tests.

Further reductions in fish numbers were discussed at the expert meeting for the concentration range-finding process. This could be carried out by stepping-down from the UTC [1] reducing the number of fish by up to 70%. Furthermore, the use of fish embryos (48h FET) [2] instead of fish would lead to an additional reduction of 20%. Only the definitive test (limit or full test) has to be performed with fish (confirmation of the fish embryo test data).

The present proposals [3] could easily be put into practice immediately without a reduction of quality in the results. However, for global acceptance and implementation, an amendment of the OECD Guideline is mandatory. A lead country has to submit the proposed changes to the OECD with a Standard Project Submission Form (SPSF). At present, two SPSF have been submitted to the Federal Office for the Environment in Bern, Switzerland. One SPSF proposes a change of §17 of Guideline 203, Fish Acute Toxicity Test, from using “at least 7 fish at each concentration” to “6 fish”, the other to replace the fish in the concentration range-finding process with fish embryos. These changes will not only have a pronounced 3R-effect through an additional reduction of fish, furthermore, resources, time, cost and manpower will be reduced. For rapid global acceptance, the proposed protocol changes have to be explained to a wider audience in order to get support in meetings of the OECD.

PDF version of this Bulletin No. 43

The findings elaborated with the present project were presented at the SETAC*** meeting in May 2010 and will be submitted to Environmental Toxicology and Chemistry (ET & C) for publication. For the proposal of using the fish embryo test instead of the fish juvenile test, the subject will be taken up during the OECD workshop on the Fish Testing Framework in September 2010.

*** Society of Environmental Toxicology and Chemistry