The blood-brain barrier in a dish: a new multicellular in vitro model

This project (No. 93-04) supported by the 3R Research Foundation is focused on characterisation and validation of an innovative 3-dimensional (3D) model to investigate development of the blood brain barrier (BBB)[*] and its response to stress and drug exposure. Given the large number of diseases characterised by BBB breakdown, the present model will have wide applications in life sciences as well as pharmaceutical industries.

The BBB is a vascular network consisting of 3 major cell types namely astrocytes, pericytes and endothelial cells. Endothelial cells form the lining of the blood vessels and, unique to the BBB, display a specialized phenotype characterized by presence of tight junctions that limit diffusion of water-soluble compounds from the blood to the brain tissue (Fig 1A). Astrocytes, and more recently pericytes, have been shown to be instrumental in BBB function both in vitro and in vivo through interactions with endothelial cells via the blood vessel walls (Fig 1A). However the full contribution of these perivascular cells and their mechanisms of action remain unclear. Our rat-specific model system comprises all 3 cells types; an endothelial cell line (RBE4) and primary astrocytes and pericytes isolated from rat brain tissue. Notably these primary cells can be passaged facilitating expansion of the cells obtained from a single isolation procedure3.

Fig. 1:
(A) Diagrammatic representation of the BBB in vivo (From Abbot 1989) showing endothelial cells (E) ensheathed by astrocyte endfeet (A) and pericytes (P) forming close contacts with the vessel wall. Cellular interactions in our in vitro model are analogous to the organisation in vivo (B and C). Red: endothelial cells forming the vessel structures; green/yellow: astrocyte endfeet processes interact with vessel wall; blue: pericytes closely associated with vessel wall and without long processes. Scale bars; B = 50μm, C = 100μm.

Our 3D model system employs a collagen extracellular matrix scaffold into which the cells are seeded and cultured over time. The matrix allows cellular movement and enables each cell to display their specific unique morphology as occurs in vivo. Importantly the cells can be cultured for up to 8 days in the matrix and various analyses can be performed at different time points to study cellular interactions and characteristics. During early development (2-4 days) the culture manifests different endothelial structures such as cysts which then contact each other via formation of intercystal connections that finally give rise to tube-like structures. These structures appear highly analogous to those observed during vascular development in vertebrates namely blood islands, primary vascular plexus and angiogenic blood vessels respectively (Fig 2). After 5 days angiogenesis slows resulting in a complex vascular network analogous to blood vessels that are contacted by astrocytes and pericytes mimicking the organisation that occurs in vivo (Fig 1B and C). 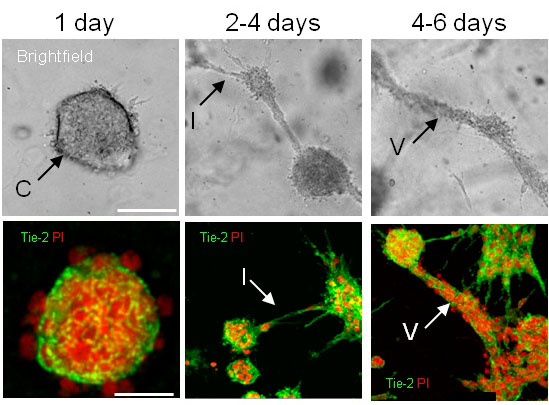 Our model correlates well to the in vivo situation in many important aspects. The blood vessels produced are hollow demonstrating the presence of a lumen. Furthermore astrocyte and/or pericyte interactions are required for adequate induction of well-established barrier properties such as proper localised adherens and tight junction complex formation3,4. Efficient vascular polarity, confirmed by presence of active BBB transporters (such as P-gp and MDR1) at the luminal and abluminal surface of the vessel wall, was also only observed in the presence of astrocytes and pericytes. Exposure of the cultures to hypoxia, or drugs known to increase vascular permeability such as mannitol, induced expression of hypoxia-responsive genes such as VEGF and Epo. These treatments also altered the localisation of junctional proteins, stimulated movement of the perivascular cells away from the vessel wall and caused vascular instability. Such alterations are known to occur in vivo4 showing our 3D model not only convincingly reproduces the expected specific cellular interactions but is dynamic and accurately responds to environmental influences.

Synergism between astrocytes and pericytes

This relatively simple, dynamic model represents a new tool to address open questions of developmental and maturational aspects of BBB function and regulation. Using 2 cell co-cultures we observed that astrocytes and pericytes differentially modulate tube morphogenesis. Although both cells inhibited endothelial proliferation during developmental processes, compared to endothelial monocultures astrocytes increased tube length by 35% and diameter by 50% whereas pericytes reduced diameters by 40%. Notably 3 cell cultures produced the longest tubes (an increase of 47%) but had diameters comparable to monocultures of endothelial cells. Overall, our data suggest that during development pericytes play an important pro-angiogenic role whereas astrocytes are predominantly anti-angiogenic accelerating tube stabilization and maturation. Together the pericytic pro-angiogenic effect is blunted whereas the astrocytic effect is potentiated - a tipping of the balance in favor of astrocytes. During adverse conditions such as hypoxia or drug exposure our findings further indicate that both astrocytes and pericytes significantly contribute to vascular stability. A clear advantage observed in presence of both cells suggests a synergistic effect that protects BBB integrity. Taken together this data supports the concept that currently existing in vitro models would benefit from the inclusion of both cell types in BBB studies.

Advantages and limitations of the 3D model

Some of the major advantages of this model are that it is relatively easy to establish (although some specialized equipment is required to monitor cellular interactions) and its cost effectiveness. Furthermore its complexity, although highly simplified compared to in vivo systems, and accuracy allows a broader and more relevant look at changes at the BBB compared to previous models. However the model also has some limitations. All cells must be added to the matrix simultaneously whereas in vivo only pericytes are present during embryonic angiogenesis, and astrocytes are mainly present after birth. Also there is an absence of (blood) flow in the system. The introduction of flow will be technically challenging however we are currently evaluating the feasibility.

A first manuscript with detailed description of the characterisation and validation of the model is currently being peer reviewed5. Effects of different growth factors and compounds at the BBB and cDNA array analysis are currently under investigation to identify genes instrumental in the formation, maintenance and break down of the BBB.

Overall, this versatile system will undoubtedly improve our understanding of the importance of cell-cell interactions and the mechanisms underlying BBB regulation during both physiological and pathological situations. Our model will promote a substantial reduction and replacement of complex, expensive and invasive animal experiments, as well as refinement of potential therapeutic tools and strategies prior to animal testing.

PDF version of this Bulletin No. 42