A substantial fraction of inhaled particles is deposited in the lungs. The interaction of these particles with the inner lung surface[*] and resulting possible adverse effects can be studied in lung cell culture models as developed in the present project (No. 89-03), supported by the 3R Research Foundation. The past and current support by COST Action 633, the European Community (POLYSOA project) and the Swiss National Science Foundation, is kindly acknowledged.

Adverse health effects associated with exposure to fine and ultrafine particles in ambient air (PM 2.5 = particulate matter ≤ 2.5 μm) are well documented by epidemiology and supported by animal studies. However, the underlying mechanisms, i.e. particle properties responsible for these effects are only poorly understood. In addition, the exponentially growing production of engineered nanoparticles (NP, particles with at least one dimension ≤ 100 nm) urgently requires the identification of possible hazardous effects. Data for inhaled environmental particles are particularly pressing, because this is the major route for unwanted exposure. In fact there is evidence for prolonged retention of NP in lungs, since they circumvent phagocytosis by macrophages2. Consequently, the probability of NP uptake by the lung epithelium and/or translocation through it increases3, which is a desired effect in the event of future medical use of NP as diagnostic tools or as therapeutics.

Cellular responses have to be related to the dose and nature of the aerosols exposed to. For this purpose we have developed a novel particle deposition chamber mimicking closely the conditions in the lungs4. The advantage of this system is that particles are deposited out of a continuous gas flow very efficiently and uniformly onto the cell cultures and particle parameters are continuously monitored.

Two types of cultures were established and their function analyzed: explants and primary cell cultures from porcine or human lungs:

Organotypic explant cultures: They are obtained by microdissection of the respiratory epithelium from freshly excised porcine tracheae and primary bronchi derived from slaughtered animals. Thereby, the respiratory epithelium is carefully peeled off the trachea, placed on cell culture inserts with a microporous membrane in a two-chamber system (multiwell plates). These “explants” are maintained at the air-liquid interface (ALI), i.e. by feeding cells only at the basolateral side with sufficient medium to keep the cell layer hydrated without submerging the apical cell surface. The explants maintain their structural integrity, as regularly checked by microscopy (Fig. 2A), they continue to produce mucus and keep up ciliary beating at physiological rates. Explant cultures can be maintained for up to 10-14 days; they represent the structure and function of the inner surface of airways best. 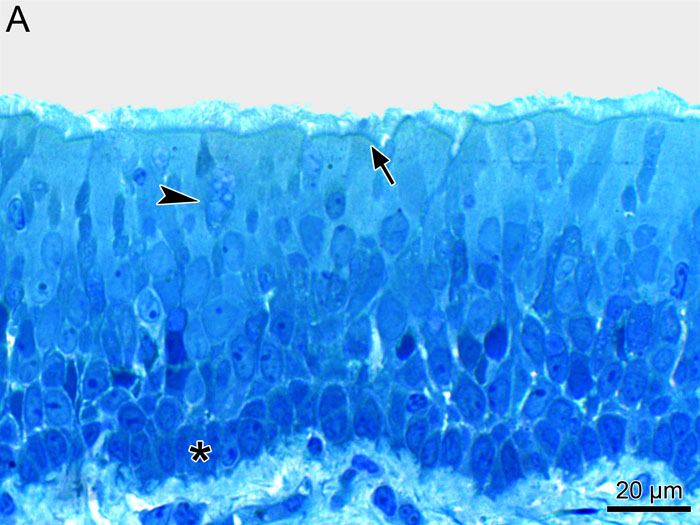 Primary cell cultures: (i) Epithelial cells are obtained by enzymatically dislodging them from proximal airways and either direct culturing of differentiated cells (porcine) (Fig. 2B) or expansion and re-differentiation of cells (human). Again ALI cultures on filter inserts are established, a prerequisite to attaining a well-developed epithelium with ciliary beating and mucus production. These cultures can be kept for weeks, allowing e.g. testing effects by repetitive aerosol exposures or cell recovery after aerosol-induced impairment. (ii) Lung-surface macrophages, the phagocytes with acknowledged importance in particle clearance from lungs, are obtained by bronchoalveolar lavage (BAL) from (porcine or human) lungs. They are either directly cultured on filter inserts to study cell-type specific responses to aerosol exposures, or co-cultured with epithelial cell cultures, by adding them in appropriate number concentration on top of the epithelial cell cultures in order to investigate macrophage-epithelial cell interactions. 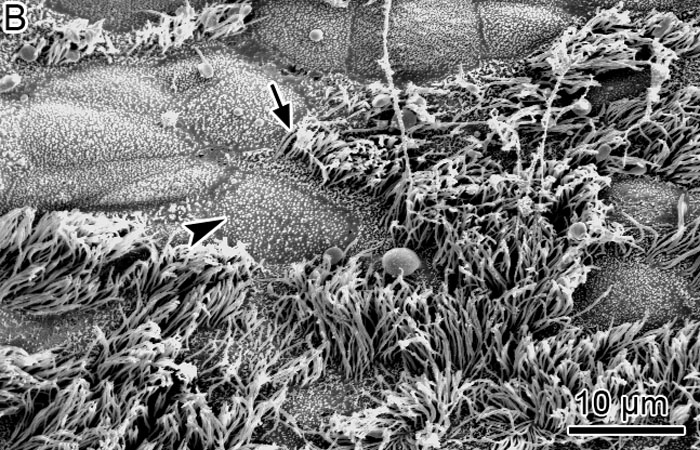 First experiments were performed to investigate the effects of secondary organic aerosols (SOA, particles formed in a smog chamber from precursor molecules with UV-light) on epithelial cells and macrophages separately5. Cell cultures were exposed in the novel particle deposition chamber for 2 hours to the aerosol or as control to particle-free air. Cellular responses were examined within 24 hours after aerosol exposure: Cellular integrity was evaluated by electron microscopy, cytotoxicity by lactate dehydrogenase (LDH) release, inflammatory processes by interleukins (IL-6, IL-8) and tumor-necrosis factor (TNF-α) release, and phagocytic activity of macrophages by post-exposure treatment with inert particles. The exposure to SOA in concentrations comparable to environmental concentrations resulted in small, but specific inflammatory effect effects, as illustrated in Fig. 3 for epithelial cells. In future experiments dose-response relationships will be established. 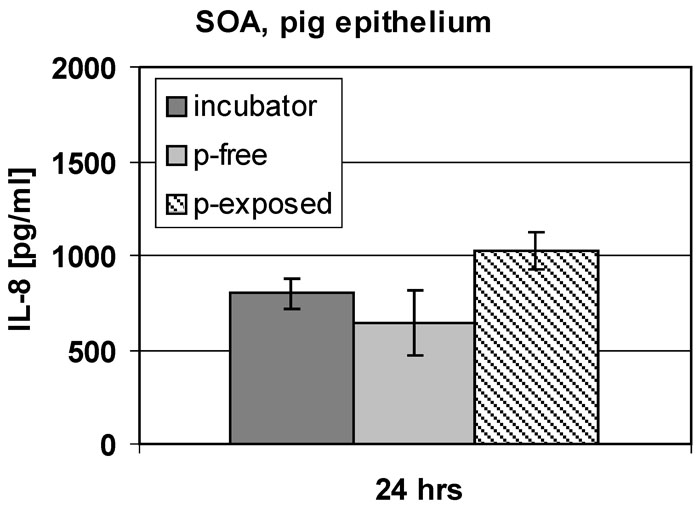 Fig. 3:
Responses of epithelial cell cultures to SOA exposure. In this experiment, there is evidence for an increased inflammatory response in SOA exposed cell cultures, compared to untreated control cultures (“incubator”) and controls exposed to particle-free air (p-free).

The organotypic airway epithelial explant cultures established in this project incorporate all cell types in their real number concentration and distribution, and they keep up organ-specific functions, i.e. ciliary beating and mucus secretion. They may be obtained from various animal species. We have chosen pigs’ lungs because of their similarity to human lungs and good availability. The disadvantage of having a limited life span is counterbalanced by their genuine structure and function. Explants from human airways are hardly available. As a substitute, the re-differentiated human epithelial cells together with macrophages can be used at the expense of some loss of authentic structure and function.

The models we have established allow the study of particle effects without living animals at cellular and molecular levels, mainly in two in different areas: (i) hazard identification of inhaled ultrafine particles generated by combustion processes, e.g. by diesel engines and wood-burning stoves and of newly-produced nanomaterials; (ii) evaluation of new therapeutic aerosols to treat lung and systemic diseases. Moreover, the model system now representing the healthy lung may be replaced by a replica of diseased lungs eventually reducing the need for experiments with diseased animals.

PDF version of this Bulletin No. 38