Host pathogen interactions can be studied in amoebae instead of animals

Studying the interaction of pathogenic bacteria with a host[*] necessitates the controlled infection of a host. Mice or rats are classical models and these experiments inflict significant suffering on infected animals. In the present project no. 90-03, supported by the 3R Research Foundation, unicellular Dictyostelium amoebae were used as alternative hosts to study bacterial pathogens. The results obtained demonstrate that this model could, to a large extent, replace the use of mammals.

After a pathogen breaches the first physical barriers (e.g. damaged skin) of the host, phagocytes represent an important part of the constitutive (in contrast to the immunological) cellular defence.

Amoebae are complex unicellular organisms that have been used largely for genetic studies. They engulf and kill bacteria in a manner similar to mammalian phagocytes (Fig. 1). Therefore they can be used as a model for phagocytic mammalian cells. On the other hand, bacteria have developed a wide variety of strategies to avoid phagocytosis and killing by using similar mechanisms to fight amoebae or mammalian phagocytes. They can prevent growth of amoebae by avoiding phagocytosis, by secreting a wide variety of toxic compounds, or due to their resistance to intracellular killing. All these bacterial virulence traits are essential during the infection of a mammalian host, and all of them can be measured by using a Dictyostelium host. 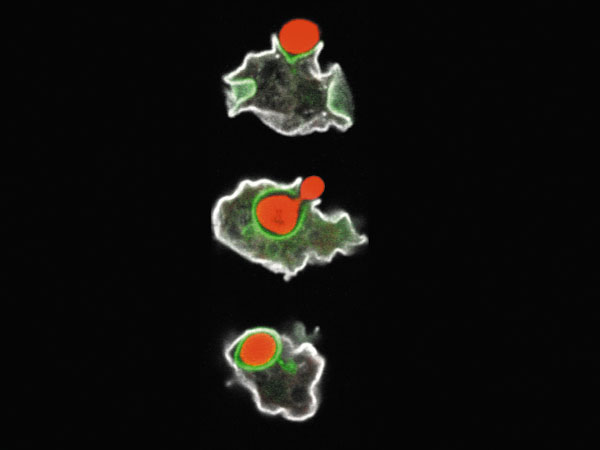 Virulence of Pseudomonas bacteria in mammals and amoebae

Pseudomonas bacteria represent a serious health problem in developed countries and are responsible notably for pneumonia or septicemia. They are also often resistant to a wide spectrum of antibiotics. Classical models to assess the virulence of Pseudomonas bacteria include burn wound infections or pulmonary infections, usually in immuno-compromised mice or rats. Our initial studies demonstrated that Dictyostelium amoebae can grow on non-virulent Pseudomonas strains, but not on virulent strains1 (Fig. 2). In a more recent series of experiments, we mutagenized randomly virulent Pseudomonas bacteria, isolated mutants that were non-virulent against Dictyostelium, and tested them in a classical mouse pulmonary infection model2. The mutants all showed a strong reduction in their virulence against mice. Together these results indicate that the Dictyostelium model system can be used as a non-mammalian model to assess Pseudomonas virulence. 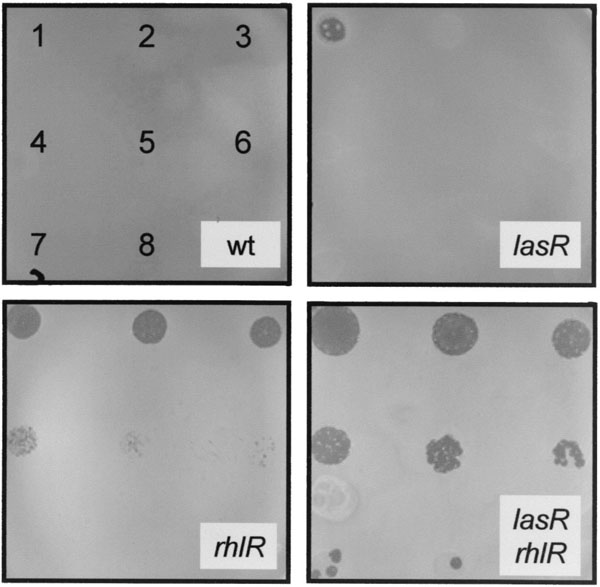 In an effort to extend our results to other bacterial pathogens, we defined conditions in which the virulence of various Aeromonas species could be tested against Dictyostelium. Aeromonas salmonicida infects cold-blooded vertebrates and therefore mammals are not relevant hosts. This necessitated an adjustment of the assay conditions. Again Dictyostelium predicted correctly the virulence of Aeromonas salmonicida, but also of Aeromonas hydrophila, which can also be pathogenic for humans 3.

Towards an extensive analysis of host-pathogen interactions

One critical parameter determining the outcome of a bacterial infection is the potency of the host defences. Thus immuno-compromised patients can be infected by bacterial strains that would usually not infect healthy individuals. Numerous laboratories are analyzing which host genes are essential for the immune defence against various pathogens. A large number of these experiments rely on the use of transgenic mice affecting the function of various host genes.

We are using the Dictyostelium model to analyze host genes implicated in the resistance to bacterial pathogens. Our recent studies revealed the role of two amoebae proteins (Phg1 and Kil1) in the intracellular killing of internalized bacteria by Dictyostelium amoebae (Fig. 3)4. In this system, bacterial genetics and host genetics can be combined to analyze efficiently the complex confrontation of host cells with pathogenic bacteria. For example we could show that phg1 mutant amoebae are incapable of killing normal virulent Klebsiella bacteria, but they can kill Klebsiella mutants that are particularly sensitive to killing by amoebae. Phg1 is also involved in the defence of flies against bacterial infections, suggesting that the genes and mechanisms involved are most likely well conserved and relevant to the situation in mammals. 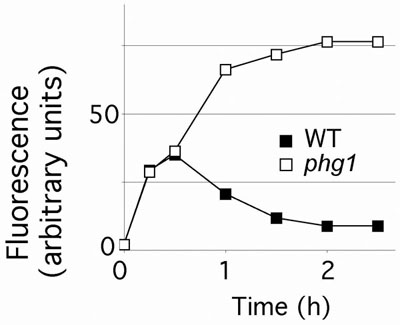 In order to analyze host-pathogen interactions, hosts must be infected experimentally with pathogenic bacteria. When carried out in mice or rats, this can lead to sickness or even death of the animals. These experiments are typically performed either to measure bacterial virulence or to determine the role of host genes in host-pathogen interactions. Furthermore efficient infections are often achieved in rodents by destroying some elements of their defences, for example by creating wounds or by destroying their phagocytic cells.

Clearly the present in vitro model demonstrates that bacterial virulence is similar in a Dictyostelium host model when compared to mammals. This remains true for a variety of pathogenic bacteria so far analyzed. In addition this model system can be adjusted to bacterial pathogens living in different environments. Finally our results suggest that at least a part of the analysis of host gene products involved in the defence against pathogens could be done in Dictyostelium. Our laboratory is currently actively pursuing this line of research.

In conclusion, the development of easy, cheap and reliable alternative non-mammalian models should significantly reduce the need to infect mammals. Far from hindering research in this field, we expect that use of alternative models will actually help to increase our understanding of bacterial infections.

PDF version of this Bulletin No. 36