Background and Aim
Many CNS-drug candidates are ineffective in vivo, because they are not able to cross the barriers of the brain microvascular endothelial cells (blood-brain barrier) and/or the choroid plexus, which is localized in the cerebral ventricles and is formed by capillaries, surrounded by epithelial cells (Fig.1). There is an urgent need to characterize the mechanisms of transport across these barriers.
The aim of this study was the development of an in vitro choroid plexus (CP) cell culture model for studying transport of protein-mediated drug secretion from blood to cerebrospinal fluid (CSF) and vice versa.

Method and Results
Cells were isolated by mechanical and enzymatic treatment of freshly isolated porcine plexus tissue. Epithelial cell monolayers were grown and CSF secretion and transepithelial resistance were determined. The expression of f-actin as well as the choroid plexus marker protein transthyretin (TTR), were assessed. Permeability studies with marker compounds of different molecular weight were performed in order to assess monolayer integrity. The expression of the export proteins p-glycoprotein (Pgp, Abcb1) multidrug resistance protein1 (Mrp1, Abcc1) and Mrp4 (Abcc4) was studied by RT-PCR, Western-blot and immunofluorescence techniques and their functional activity was assessed by transport and uptake experiments.

Choroid plexus epithelial cells were isolated in high purity and grown to form confluent monolayers. Filter-grown monolayers displayed transendothelial resistance (TEER) values in the range of 100 to 150 Ohm x cm2. Morphologically, the cells showed the typical net work of f-actin and expressed TTR at a high rate (Fig. 2). The cultured cells were able to secrete CSF at a rate of 148.2 +/- 4.6 ul/cm2/h over 2-3 hours (Fig. 3). Permeation experiments with molecular size markers indicated the formation of intact tight junctions with transport rates being lowest after 10-14 days of culture. Transport experiments were performed using fluorescent substrates of Mrp1 and Mrp4 (Texas Red, Fluorescein-Methotrexate, Fluo-cAMP) and P-gp (Bodipy-Verapamil, Rhodamin-123). Whereas the Mrp-substrates exhibited directed transport across cell monolayers, hardly any active transport could be demonstrated for the p-gp substrates. The ABC-export protein Mrp1 as well as Mrp4 were expressed in the basolateral (blood-facing) membranes of cell monolayers and intact tissue (Fig. 4). P-glycoprotein showed only low expression within the apical (CSF directed) membrane but was located more in sub-apical cell compartments.

Conclusions and Relevance for 3R
It was demonstrated that CP epithelium can be isolated and cultured, with cells growing into intact monolayers, fully differentiating and with properties resembling the tissue in vivo. Thus, the established primary porcine CP model, allowing investigation of complex transport processes, can be used as a reliable tool for analysis of xenobiotic transport across the blood-cerebrospinal fluid barrier (BCSFB). 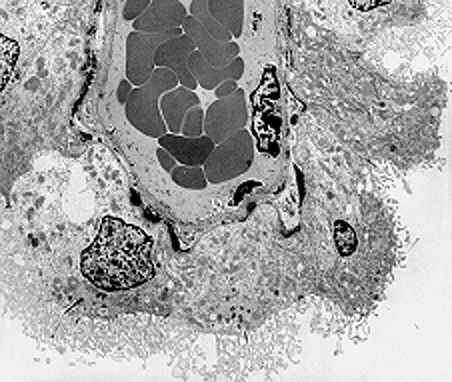 Figure 1: Elektron micrograph of a choroid plexus microvessel surrounded by epithelial cells. The dark cells in the center of the image are red blood cells in the luminal space of the capillary. Epithelial cells are covered by microvilli oriented to the cerebrospinal fluid. 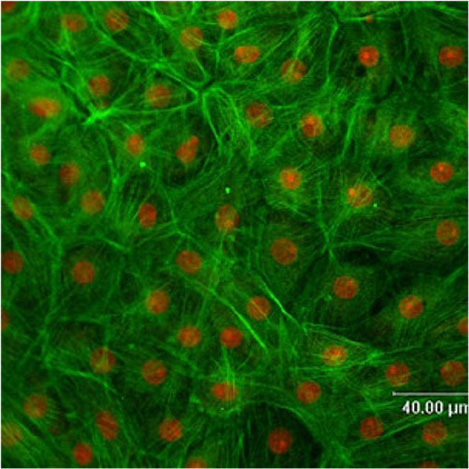 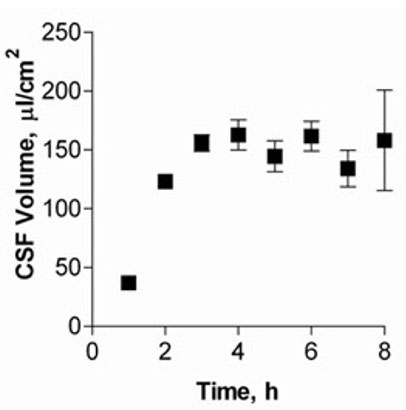 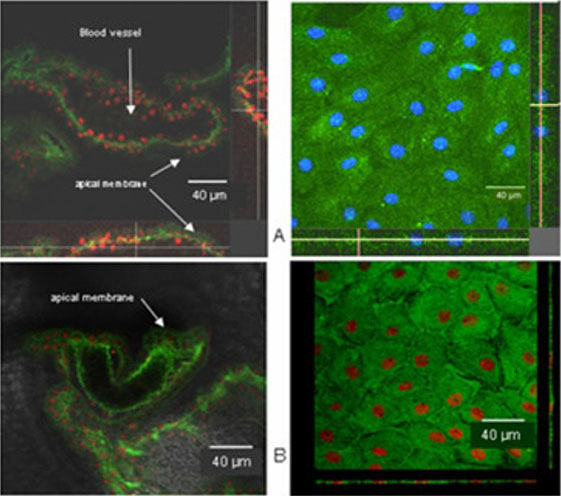