Background and Aim
In the study of bacterial infectious diseases and in the development of new drugs, it is very often essential to test a bacteria’s capability to cause a disease. To initiate such a situation, it is necessary to infect a host, typically a mouse, and allow the disease to progress. We are working on a new system where mice are replaced by a non-mammalian host: Dictyostelium discoideum, a soil amoeba. Very similar results are obtained in this system and in mammalian hosts. We now want to extend these results to validate this system as an alternative to mammalian models.

Method and Results
Dictyostelium discoideum is a powerful genetic system to analyze the complex relationship between bacteria and phagocytic cells. Our initial work was focused on the mechanisms controling phagocytosis of bacteria by amoebae (1). We have more recently focused on the interaction of Dictyostelium amoebae with pathogenic bacteria (Figure 1). We have shown that Pseudomonas aeruginosa makes use of a number of virulence factors to inhibit the growth of Dictyostelium amoebae (2). In particular virulence factors produced under the control of the quorum-sensing systems are crucial for Pseudomonas virulence against amoebae, while in another Pseudomonas strain, the type III secretion system was also important for virulence. Thus virulence factors characterized previously in mammalian systems, also play a role in Pseudomonas virulence against Dictyostelium amoebae.
More recent results allowed us to extend our initial findings to study many different bacterial pathogens, in particular Klebsiella pneumoniae (3). Based on our current results it is clear that, firstly this system can be adapted to study many different bacterial pathogens (4), secondly results obtained in this system are very similar to results obtained in mammalian hosts and thirdly the system is simple enough, to be easily used in non-specialized laboratories.

Conclusions and Relevance for 3R
As is summarized above, our project is to establish, extend and validate the Dictyostelium system as a relevant model in the study of bacterial infections. This would allow the replacement of animal experiments using mammalian hosts (typically mice or rats) with simple experiments, using Dictyostelium as a non-mammalian host. Experiments using animals to study infections usually require large numbers of animals. They inflict significant suffering on the infected animals and the conclusion of the experiments is often animal death. Thus it will be particularly useful to develop a credible alternative. Our project will allow the Dictyostelium system to be widely used by many research laboratories in studying bacterial diseases. This would make research in this field much easier and at the same time reduce significantly the need for animal experiments in mammalian species. 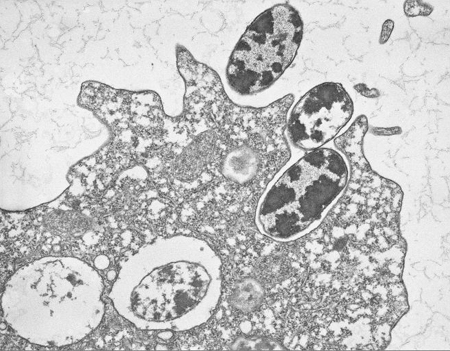