Background and Aim
Both Neospora caninum and Toxoplasma gondii are protozoan parasites of high human (Toxoplasma) and veterinary (Neospora) medical importance. Both parasites undergo a life cycle comprised of three distinct stages: Bradyzoites, tachyzoites and sporozoites. Bradyzoites represent a quiescent, slowly proliferating stage, in which parasites are enclosed in tissue cysts. Oral ingestion of tissue cysts containing T. gondii or N. caninum bradyzoites by a carnivorous host, namely cats (T. gondii) or dogs (N. caninum) leads to sexual differentiation of the parasites in their intestinal tissues. Parasite eggs become fertilized and form oocysts, which are then excreted in the faeces of the host animals. In the environment, these oocysts produce the third stage of these parasites, the sporozoites, through a process called sporulation. Sporulated oocysts are orally infective for both carnivores and herbivores, and are of prime epidemiological importance for both toxoplasmosis and neosporosis due to environmental contamination. Up to now, oocyst production for both species has always relied on extensive animal experimentation, employing either cats (T. gondii) or dogs (N. caninum).
During a previous 3R project, we established an in vitro tachyzoite-to-bradyzoite stage conversion technique to obtain cultures of N. caninum bradyzoites. The aim of this project is to employ in vitro cultured N. caninum and T. gondii bradyzoites to generate the sexual stages of T. gondii and N. caninum in intestinal cell cultures, for the production of oocysts in vitro.

Method and Results
A technique has been developed and refined, that allows to culture canine intestinal cells in vitro for up to 14 days. Cultures can be initiated from biopsies, but are more reliable when initiated from neonatal tissue. The cells carry to typical structural and morphological features of intestinal epithelial cells (polarized morphology, microvilli, desmosomes), and they react positively with antibodies recognizing a broad spectrum of keratin filaments, desmosomal markes and thight junction proteins. Only a small portion (<10%) in these cultures react with an antibody against vimentin, which stains contaminating cells of non-epithelial origin. This culture system has been successfulyl infected with N. caninum tachyzoites and bradyzoites, also obtained from in vitro culture (Vonlaufen et al., 2002; 2004). Further variation of culture conditions to induce sexual development is now in progress.
T. gondi and N. caninum bradyzoites have been cultured in vitro using our previously developed method. Bradyzoites were purified from these cultures (Vonlaufen et al., 2004), and a human intestinal cancer cell line (Caco2) has been infected. No stage conversion to enteroepithelial sexual stages could be detected, despite testing of a number of different cell culture conditions (changes in CO2 and O2 concentrations, including strictly anaerobic conditions, modulating the pH and temperature of the culture medium, and the addition of immunomodulators such as interferon-gamma or TNF-alpha, exogenous NO (from sodium nitroprusside) or antisera directed against bradyzoite and and tachyzoite antigens.
In addition, we demonstrated that sialic acid residues present on the host cell surface affect host cell invasion by N. caninum bradyzoites. Removal of sialic acid improves invasion efficiency, and treatment of parasites with a sialidase inhibitor also inhibits host cell iinteraction. This implies that parasites have evolved some means of removing sialic acid from the host cell surface, in order to gain entry. We have isolated a fetuin-binding protein fraction, which could be involved in this process, and we have shown that this fraction exhibits profound metalloproteinase activity.

Conclusions and Relevance for 3R
The development of an in vitro culture model to produce T. gondi and N. caninum oocysts would open the possibility of culturing all stages of the life cycle of these two parasites in vitro. This will enable studies on therapy and vaccination against toxoplasmosis/neosporosis to be performed without the use of animals. However, we have grossly underestimated the difficulties associated with the development of a reliable technique to isolate and culture intestinal cells of canine and feline origin. Further work is being carried out to achieve the final goals of this project.

The 3R Foundation Switzerland congratulates Prof. A. Hemphill for the awards he received for his work:
Dieter Lüttiken award for animal welfare on 2005. The laudation is as follows:
“The application not only focuses on the setup of a new method; it also concentrates on a strategic approach for fundamental and applied research. A spin-off to related areas can be expected. The study is highly relevant in terms of the 3Rs, in particular for Replacement.”
Egon Naef Award 2006 for in vitro Research:
Honored for the development and application of in vitro cellular cultures for the study of interactions between parasite/host and for the discovery of treatment of the parasitic diseases in helminths and protozoa (Neospora caninum, Girardia intestinalis) 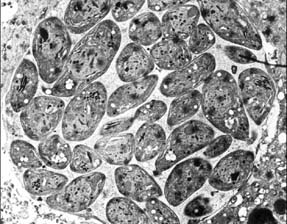 Figure 3
Sporozoites (within an oocyst). 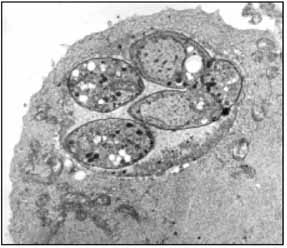 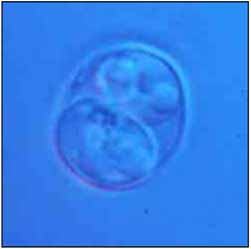