Background and Aim
In the acute fish toxicity test according to OECD guideline 203, LC50 is assessed in terms of the concentration of a test substance at which 50% of the fish die within an exposure period of 96h. 7 fish per sample are exposed to 5 different concentrations plus a control. The criterion for death is defined as (§ 19): "no visible movement, no response when touching the tail." A total of at least 6 x 7 = 42 fish are exposed to severity degrees ranging from 1 to 3.
The duration of suffering could be reduced by using the criterion of ”moribund” commonly applied in rodent acute toxicity testing. Fish might be declared moribund if no visible movement is observed and are removed from the test as soon as this occurs. Dictionary definitions of moribund include words and phrases such as “dying”, ”at the point of death”, “in the state of dying”, or “approaching death” (there is no official definition for moribund stage in fish). The criterion has already been introduced to ecotoxicological testing in the UK, and is being used by some laboratories in Germany and Switzerland. It not only leads to a deviation from the OECD guideline but, and more importantly, also affects main study outcomes, in particular the LC50 values, which may be lower when moribund is applied. Accordingly the present study has several goals. 1) to find a suitable and commonly acceptable definition for the state moribund in fish, 2) to assess the magnitude of the potential decrease of the LC50 value, 3) to estimate the range of shortening the suffering of the fish, and 4) to provide information on how the test guideline should be adapted to reduce the subjectiveness introduced by the use of a the state moribund. 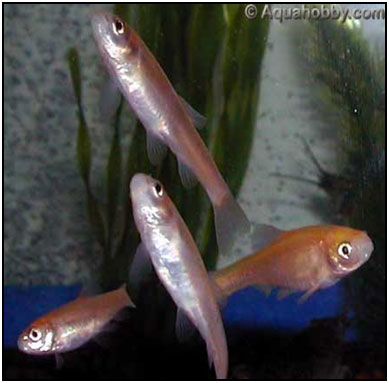 Table 3
Comparison between LC50 and LCmoribund in a real-life study:
3A: Mortaility reported, 7 fish per concentration, LC50 calculated.
3B: Sublethal symptoms observed
The severity degrees 3 of Swimming Behaviour and Loss of Equilibrium are marked within the blue frame as these indicate moribund status according to the definition A.
Explanation of symptoms: 0: none; 1: light; 2: moderate; 3: severe.

Method and Results
in progress (present status)
In a first step, moribund state was defined. A first definition (Definition A Table 2) arises from the reporting style of existing studies of an industry laboratory (observations of five symptoms, Swimming Behaviour, Loss of Equilibrium, Respiratory Function, Pigmentation and Exophthalmus as suggested in the OECD guideline)#Table 2# Definition A is based on observations of at least two of the following sub-lethal symptoms Swimming Behaviour, Loss of Equilibrium, and Respiratory Function over 48h with severe symptoms (severity degree 3 in a range from 0 to 3).
The effect on the LD50 values was investigated by a retrospective analysis of 328 studies of an industry laboratory. The analysis was based on definition A of moribund. This allows determining the magnitude of the LC50 based on moribund fish, LC50moribund, the frequency of a reduction of the LC50 moribund compared to the conventional LC50, and the number of fish affected by a shortened duration of exposure and/or suffering.
A typical example of the symptoms and degrees of severity as reported by the industry laboratory is given in Table 3. #Table 3# In this study, fish showed severe symptoms expressed in terms of altered swimming behaviour and loss of equilibrium from 24h to 96h (i.e. over a period of 72h). The fish would be declared moribund after 48h and removed from the test, thereby reducing degree 3 severity of suffering by 48h in concentrations of 0.88, 1.7, 3.3 and 6.5 mg/L (28 fish in total). Accordingly LC moribund would be 100% in the 4 concentrations whereas the "death" (lethal) criterion results in only 14, 14, 29 and 43% mortality within a 48h time span. Hence, the application of the moribund criterion results in a LC50 moribund of 0.66 compared to 4.4 mg/L using the conventional method (factor 6.7 lower), and to a classification of the chemical into the acute category 1 for hazardous to the aquatic environment (acute (short-term) aquatic hazard).
The procedure was repeated based on a second definition (Definiton B Table 2) of moribund deducted from the reporting style of other industry laboratories. Finally, the outcome of three additional definitions of moribund (Definiton C, D and E, Table 2) based on the reporting style of 10 different laboratories in Europe and the U.S. was evaluated both on the 328 fish acute toxicity tests of the industry laboratory and the 111 tests from the other laboratories.
In the studies evaluated, 10 to 23% of the fish were declared as moribund reducing the suffering of severity grade 3 (severe distress) by up to 92h. The median of the decrease of LC50moribund in relation to the LC50 was by a factor of about 2; the maximum factor observed was 15.7. While the reduction of the suffering is desirable, a decrease of the measured toxicity endpoint has consequences on the classification and on risk assessments.To produce comparable results between laboratories when moribund is used requires the following specifications in an updated test guideline: 1) A unique, generally accepted definition of the moribund state in fish, 2) specification on the type of visible abnormalities to be reported (symptoms), and 3) specifications on the degree of the effects (e.g. how many single observations per concentration).

Conclusions and Relevance for 3R
The potential of the project is in refinement. In 2009 and 2010, 46,000 and 36,000 fish were used for testing in Switzerland, about 13,000 and 10,000 of which in acute and chronic toxicity tests, respectively. REACh requires approx. 1.2 million fish each year, with a considerable proportion used in toxicity tests. The fish suffer degree 3 severity at least in the highest dose. A successful inclusion of the moribund criterion in the OECD guideline would mean that fish would be exposed to stress for a shorter period of time, and suffering would be reduced accordingly.

References
Rufli H., Introduction of moribund category to OECD fish acute test and its effect on suffering and LC50-values. Environmental Toxicology and Chemistry, Vol. 31, No. 5, pp. 1107–1112, 2012. 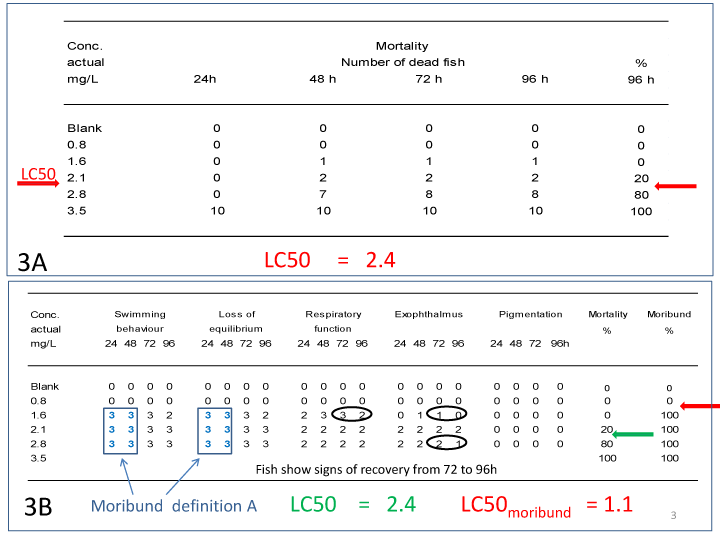